[ Editor’s Note: Chris Krebs is a solid guy, as you can see from his Wiki material below. He will somehow survive without working for Trump, as will everybody else. It seems Trump is planning to work at being the American president that keeps getting elections stolen from him, which if he runs in 2024 will be a worse defeat than in 2020.

Krebs hit the nail on the head with his last line of the interview, used in the title. If Republicans have the good fortune of finding a huge vein of gold in a hoard of crazy voters that can put them in office, they will throw the doors wide open.

QAnon has another magic ‘Trump will return’ as president date coming up on March 4th. These yokels sure ain’t no quitters. I watch a video of them tonight, lots of old and apparently well pensioned folks seem to have a lot of time on their hands, and more than a few exhibiting early dementia symptoms.

Trump can campaign all he wants but he will not get his hands back on the megaphone he once had. He will have a taste of that when the CPAC event news dies out quickly and attention shifts back to a real government with a real president dealing with the country’s problems, with highly experienced people versus the grifters that Trump had.

Trump was claiming all the credit for the vaccines at CPAC, leaving out that research had been going on for two decades on the SARS virus, and the Obama administration put a major effort into it, including passing it on to Trump who did nothing with it, until forced to.

But at CPAC he told the crowd that “conservatives owned the vaccines, and to not let anyone take that away from them”. Pfizer, who spent their own money and did their own thing, has not filed a complaint yet.

I would advise Pfizer not to sue Trump, as that line is already long, and they need to concentrate on vaccine production and fine tuning what they have for the virus variants that are in the pipeline.

I have a suspicion that Covid vaccines might become like the flu ones, with an updated version every year, with the difference that the Covid vaccines are doing much better on avoiding hospitalizations and deaths, with a reported 100% effectiveness… Jim W. Dean ] 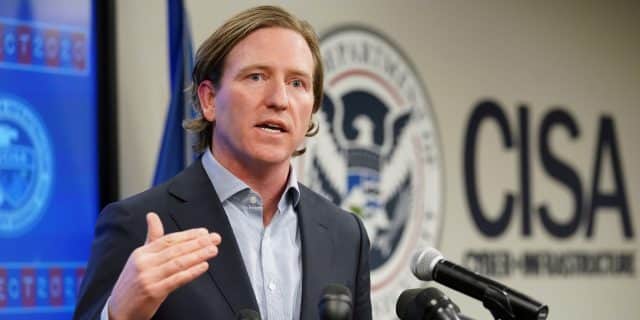 Former CISA Director Chris Krebs speaks with Nicolle Wallace about the lies of voter fraud in the 2020 election, what led to the January 6th insurrection, and the likelihood that Trump will the Republican party’s presidential nominee in 4 years.

Christopher Cox Krebs (born 1977) is an American attorney who served as Director of the Cybersecurity and Infrastructure Security Agency in the United States Department of Homeland Security from November 2018 to November 2020. In November 2020, President Donald Trump fired Krebs for refuting Trump’s claims of election fraud in the 2020 presidential election.[1]

Krebs was born in Atlanta, Georgia, in 1977.[2] He received a bachelor’s degree in environmental sciences from the University of Virginia in 1999, and a Juris Doctor from the George Mason University School of Law in 2007.[3][2]

Krebs’s professional work has focused on cybersecurity and risk management issues. He served as Senior Advisor to the Assistant Secretary of Homeland Security for Infrastructure Protection, and later worked in the private sector as Director for Cybersecurity Policy for Microsoft.[4][5][6]

In March 2017, he became Senior Counselor to the Secretary of Homeland Security. In August 2017, he was appointed Assistant Secretary for Infrastructure Protection, and performed the duties of the Under Secretary of Homeland Security for National Protection and Programs until he was confirmed to that position on a permanent basis on June 15, 2018. In November 2018, the National Protection and Programs Directorate was replaced by the Cybersecurity and Infrastructure Security Agency (CISA), and Krebs remained as director of the agency.[4]

It was reported that Krebs was being considered to serve as Acting Secretary of Homeland Security after the departure of Kevin McAleenan,[7] although he was reported to be uninterested in the position.[8]

On November 12, 2020, it was reported that Krebs expected to be fired from his position; in part, this expectation was due to Krebs’s role in creating a CISA website to debunk election-related disinformation, much of which was being promoted by President Donald Trump and his allies.[9][10] As CISA’s director, Krebs was the “administration’s most senior cybersecurity official responsible for securing the presidential election”.[11] Sidney Powell, an attorney for Trump and Michael Flynn, asserted on the Lou Dobbs and Maria Bartiromo Fox News programs that a secret government supercomputer program had switched votes from Trump to Biden in the election, a claim Krebs dismissed as “nonsense” and a “hoax.”[12]

On November 17, 2020, Krebs said in a tweet that “59 election security experts all agree, ‘in every case of which we are aware, these claims (of fraud) either have been unsubstantiated or are technically incoherent.'”[13] Trump fired Krebs via Twitter the same day, because the “recent statement by Chris Krebs on the security of the 2020 Election was highly inaccurate, in that there were massive improprieties and fraud”. Trump provided no evidence of this fraud.[14][13]

Later that month, a lawyer for the Trump campaign, Joseph diGenova, called for Krebs to be “drawn and quartered. Taken out at dawn and shot”. DiGenova’s specific criticism was that Krebs “thinks the election went well”.[15][16] Krebs responded to diGenova’s tweet in an op-ed in The Washington Post, saying “I am not going to be intimidated by these threats from telling the truth to the American people.”[17]

On December 8, Krebs filed a civil lawsuit against diGenova, the Trump campaign, and Newsmax TV, accusing them of “defamation, intentional infliction of emotional distress, aiding and abetting, and civil conspiracy”. He said that he has received “a barrage of threats and harassment” as a result of diGenova’s comments and “faces a genuine risk of imminent harm”.[18]

On January 10, 2021, Krebs suggested that Trump should resign the presidency following the 2021 storming of the United States Capitol.[19]