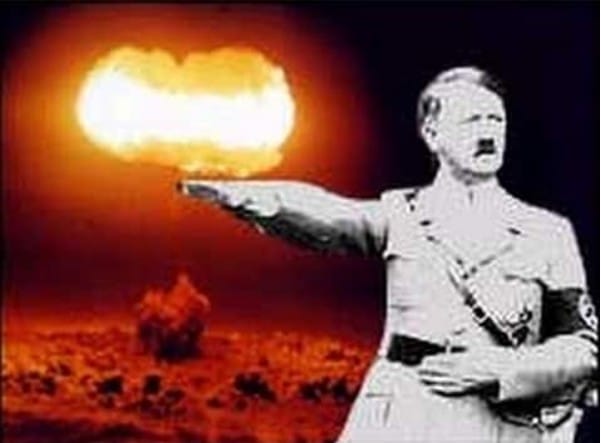 One of the most widely known and well-established facts of the 20th century is that the Manhattan Project was the first successful development of a nuclear weapon.

However, as more time passes and more research is done into the subject, it is becoming clear that the established narrative is nothing more than a fairy tale and the truth is stranger than anyone would accept as fiction.

As incredible as it sounds, the true story involves secret deals with Nazi Germany, smuggling of vital resources via U-boat, and German scientists providing the key final components needed to make the bomb work.

The heart of the story is the race to produce enough fissile material to build the bombs and the established narrative of heroic efforts by the US is very far from the truth.

The race to produce the fissile materials

The engineering challenges were immense, as were the material requirements – a copper shortage lead to the US treasury loaning 14,700 tons of silver bullion in order to complete the electromagnetic coils of Y-12. Y-12 became fully operational in March 1944 and the first shipments of enriched uranium were sent to Los Alamos in June 1944. Production of fissile material was very slow, so that by 28th December 1944, Eric Jette, the chief metallurgist at Los Alamos made the following gloomy report:

“A study of the shipment of (bomb-grade uranium) for the past three months shows the following….: At present rate, we will have 10 kilos about February 7 and 15 kilos about May 1.”

With such a paltry stockpile of enriched uranium, far below that needed for a uranium-based atom bomb and with this stockpile being depleted by the decision to develop more plutonium for an alternative bomb, the entire enterprise of the Manhattan Project appeared destined for defeat.

If the stocks of weapons-grade uranium in early 1945 after almost three years of research and production were about half of what they needed to produce just one atomic bomb, how then did the Manhattan Project acquire the large remaining amount of enriched weapons-grade uranium 235 needed to feed the Hanford reactors that produced the plutonium for the Gadget test device and also complete the Little Boy bomb dropped on Hiroshima in August 1945? Furthermore, how did they solve the pressing problem of the fuses for a plutonium bomb?

Somehow, they solved their materials shortage and on the 16th of July 1945, the Gadget test device was exploded in the New Mexico desert at the Alamogordo Bombing and Gunnery Range, part of the White Sands Proving Ground. ‘Gadget’ was a Y-1561 device very similar to the Fat Man bomb dropped on Nagasaki and used 6.2 kilograms of plutonium to produce a blast equivalent to 20 kilotons of TNT. The nuclear age was born.

While almost all research at Los Alamos since June 1944 had been focused on the implosion-type plutonium weapon that resulted in Gadget and Fat Man; a smaller team worked on a far simpler uranium-based design. In contrast to the plutonium implosion-type nuclear weapon, the uranium gun-type weapon was straightforward if not trivial to design. The concept was pursued so that in case of a failure to develop a plutonium bomb, it would still be possible to use the gun principle.

The design used the gun method to explosively force a hollow sub-critical mass of uranium-235 and a solid target cylinder together into a super-critical mass, initiating a nuclear chain reaction. This was accomplished by shooting one piece of the uranium onto the other by means of four cylindrical silk bags of nitrocellulose powder. The bomb contained 64 kg (141 lb) of enriched uranium.

The design specifications for ‘Little Boy’ were completed in February 1945. Three different contractors were used to produce the components so that no one would have a copy of the complete design. The bomb, except for the uranium payload, was ready at the beginning of May 1945. The uranium 235 projectile was completed on the 15th of June and the target on the 24th of July.

While testing of the components was conducted, no full test of a gun-type nuclear weapon occurred before the Little Boy was dropped over Hiroshima. The weapon design was simple enough that it was only deemed necessary to do laboratory tests with the gun-type assembly. Unlike the plutonium implosion design, which required sophisticated coordination of shaped explosive charges, the gun-type design was considered almost certain to work.

The partly assembled bombs without the fissile components left Hunters Point Naval Shipyard, California, on the 16th July aboard the cruiser USS Indianapolis, arriving at Tinian Island on the 26th July. The fissile components followed by air on the 30th of July. On the 9th August, B-29 Superfortress Enola Gay dropped Little Boy over Hiroshima, resulting in a 15 kiloton blast that destroyed the heart of the city.

The shortage of Uranium is suddenly overcome

The age of nuclear weapons had been ushered in, but the mystery remained – where did the enriched uranium needed come from? By the 1st of May 1945, only 15kg of enriched Uranium-235 had been produced and much of it had been directed into production of plutonium.

Clearly, a new supply of enriched uranium-235 had been found sometime after the beginning of May 1945. To find the answer, we have to examine the events of May 1945.

On the 14th of May 1945, the German long-range Type XB U-boat U-234 surrendered to USS Sutton just south of the Grand Banks and was escorted to Portsmouth Naval Shipyard. US intelligence summary NSA/USN SRMN-037, RG 457 written on the 19th May listed U-234‍ ’s cargo as including drawings, arms, medical supplies, instruments, lead, mercury, caffeine, steels, optical glass, and brass. The fact that the ship also carried a number of gold-lined containers stenciled U-235 and containing 540kg of uranium remained classified until after the end of the Cold War decades later.

The 1,200 pounds (540 kg) of uranium disappeared; researchers concluded it was most likely transferred to the Manhattan Project’s Oak Ridge diffusion plant. However, 560kg of uranium oxide would only have yielded approximately 7.7 pounds (3.5 kg) of enriched weapons-grade U-235 after processing; this was around 5% of what was required to build the Little Boy uranium fission weapon.

Furthermore, Uranium oxide is not radioactive enough to require shipping in gold-lined containers, only enriched uranium would require such shielding. Therefore we can safely conclude that the Uranium taken from U-234 was enriched, weapons-grade material ready to be worked into the fissile components of the Little Boy bomb.

The story of the German atomic bomb programs and their extensive Uranium enrichment program would take a whole book to tell in any detail, however, the basic facts are that in 1940 the Germans had seized the Belgian stockpile of high purity uranium ore mined in the Congo; German scientists had developed a chemical enrichment process many times more efficient than the process used by the Manhattan Project with the result that by the end of the war the Germans possessed a large stockpile of weapons-grade material.

Realizing the war was lost, Martin Bormann, almost certainly with the support of Adolf Hitler, had begun secret negotiations with the British and Americans to buy safe passage to South America for the leading Nazis including Hitler and Eva Braun. Bormann traded Germany’s finest military, engineering, and scientific secrets for the escape to freedom of many top Nazis, himself, and Hitler included.

As well as providing the Uranium to complete Little Boy, U-234 also brought what was needed to make the Fat Man plutonium bomb work in the form of Dr. Heinz Schlicke, an electrical engineer and Kriegsmarine officer who had invented a new type of optoelectronic fuse. He is taken to a secret POW camp at Fort Hunt, Virginia.

By this time it had become apparent that there were significant and seemingly insurmountable problems in designing a plutonium bomb, for the fuses available to the Allies were simply far too slow to achieve the uniform compression of a plutonium core within the very short span of time needed to initiate uncontrolled nuclear fission.

However, with Dr. Schlicke and a number of his fuses in their possession, the US was now able to complete their plutonium bomb.

Therefore, we can state with certainty, based on the simple historical facts, that without the German uranium and fuses, no atomic bombs would have been completed before 1946 at the earliest.