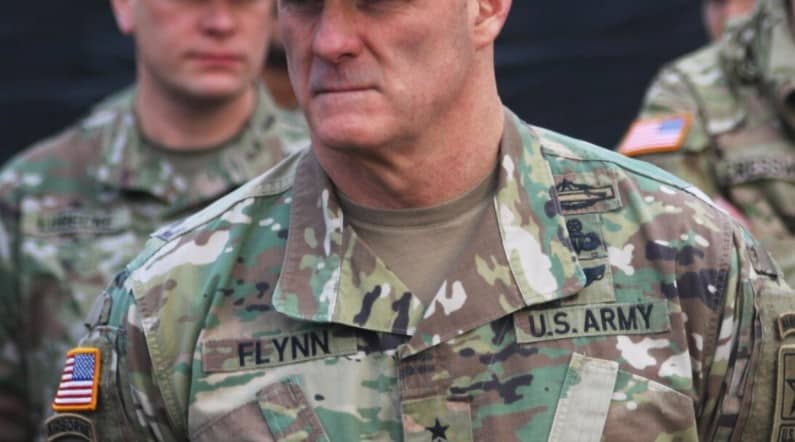 VT: A key piece of the puzzle is being covered up, the role of Charles Flynn, brother of Michael Flynn, one of the organizers of the events of January 6.

The Pentagon was caught erasing his name from the lists of decision makers that we now know held up the military response that would have saved the capitol from being overrun by GOP paramilitaries.  From CNN…

The Army is now acknowledging that Lt. Gen. Charles Flynn, the brother of President Donald Trump’s former national security adviser Michael Flynn, was in the room for one of the key January 6 phone calls in which DC government and US Capitol Police were asking for National Guard troops to quell the unfolding violence at the US Capitol.

The decision-making has come under scrutiny as city and Capitol Police officials have alleged that the Pentagon was slow to respond, while the Pentagon and Army maintain they never denied or delayed requests for the National Guard.
In official timelines released by the Department of Defense in the wake of the riot, Charles Flynn, the deputy chief of staff of the Army, was not listed as participating in any of the calls that day about mobilizing the National Guard to respond to the riot.

The Senate homeland security committee and the Senate rules committee is now starting their second joint hearing on the security failures that occurred during the Capitol insurrection.

And this from the Guardian…

In his prepared opening remarks, William J. Walker, the commanding general of the DC National Guard, said it took army leaders more than three hours to approve a request for Guard troops to be deployed to the Capitol on 6 January.

“At 1:49pm I received a frantic call from then chief of US Capitol Police, Steven Sund, where he informed me that the security perimeter at the Capitol had been breached by hostile rioters. Chief Sund, his voice cracking with emotion, indicated that there was a dire emergency on Capitol Hill and requested the immediate assistance of as many guardsmen as I could muster,” Walker said in his prepared remarks.

“Immediately after the 1.49pm call with Chief Sund, I alerted the army senior leadership of the request. The approval for Chief Sund’s request would eventually come from the acting secretary of defense and be relayed to me by army senior leaders at 5.08pm – three hours and 19 minutes later. We already had guardsmen on buses ready to move to the Capitol.

Consequently, at 5.20pm (in under 20 minutes) the District of Columbia National Guard arrived at the Capitol. We helped to re-establish the security perimeter at the east side of the Capitol to facilitate the resumption of the joint session of Congress.”

The delay is particularly alarming given that Mike Pence missed clashing with insurrectionists by a matter of minutes, around 2.15pm on 6 January.