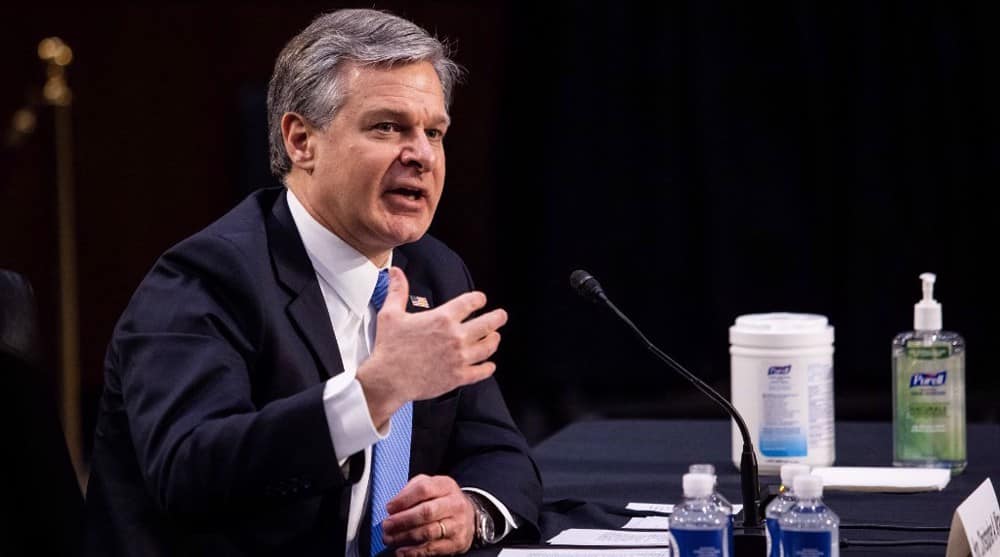 [ Editor’s Note: Christopher Wray finally got his day to say what he wanted about the Trumpers’ attack on the Capitol in an un-muzzled Congressional hearing.

It also gave him a chance to poke a hole in the Trumpsters’ ‘Antifa did it’ feeble theatrical attempt both on Insurrection Day and in the follow up media echo chamber.

The QAnon folks are also 100% aboard the con that the attack was carried out by Democrats and Antifa dressed up as Trumpsters. But where they goofed is that no Democrats have been arrested or even identified on social media, given the online videos.

Yet, lack of evidence has never prevented Trumpsters from making any allegation they ‘liked’ if they felt that repetition made it a reality, to them anyway. The huge string of court losses did not affect them at all, a strong hint that Koolaid was on the scene.

These people are a corrupt politician’s dream come true, the ones that will follow you to hell and back, but where in Jim Jones’ case in the jungle in Guyana, it was a one way gig. I felt horrible for the parents poisoning their own kids, and hope the devil gave them a just reward for that nasty deed.

Unlike Jones, who just killed all of his flock, Trump and his crew want to poison America. Now we will see if Congress can get a domestic terrorism act passed to give our security people some solid guidelines to follow… Jim W. Dean ]

The director of the US Federal Bureau of Investigation (FBI) says the acts of a mob of former President Donald Trump supporters during an attack on the US Capitol building on January 6 constituted “domestic terrorism.”

FBI Director appeared before Congress on Tuesday to answer questions regarding the deadly attack on Capitol Hill by Trump supporters.

“That siege was criminal behavior, pure and simple. It’s behavior that we, the FBI, view as domestic terrorism,” Wray told the Senate Judiciary Committee.

It was the first formal statement from the FBI about the status of an ongoing investigation of the attack.

Investigators say the perpetrators of the attack carried deadly weapons inside the Capitol building, including spears, sledge hammers, tasers, bear spray, and, in at least one case, a modified handgun.

“I was appalled that you, our country’s elected leaders, were victimized right here in these very halls,” Wray told the lawmakers, who were grilling him over the attack.

He promised the Committee that he would hold all the perpetrators accountable.

On the day of the attack, and before the raid was carried out, Trump told his loyalists in Washington, DC to show their support for him and asked them to “stop the steal” as lawmakers were in the process of confirming his defeat. Trump has been claiming to this day that he won the election and that it was stolen from him.

Trump was impeached by the US House of Representatives a historic second time for the instigation of the attack.

Five people were killed in the raid, including a police officer who reportedly died after inhaling bear spray used against him by one Trump supporter. So far, more than 300 individuals from the mob have been charged on criminal counts ranging from conspiracy to attacking police and obstructing Congress.

At least 18 people associated with the far-right “Proud Boys” group have been charged, and nine people tied to the anti-government militia known as the Oath Keepers are facing charges that they conspired as far back as November to storm the Capitol and block Congress from certifying Trump’s defeat.

Wray told lawmakers in his testimony on Tuesday that the claim that the rioters were fake Trump supporters who belonged to the left-leaning antifa movement — short for anti-fascist — were false.

Senate Judiciary Committee Chairman Dick Durbin blamed the US government for doing too little too late to fight the far-right extremists who perpetrated domestic terrorism.