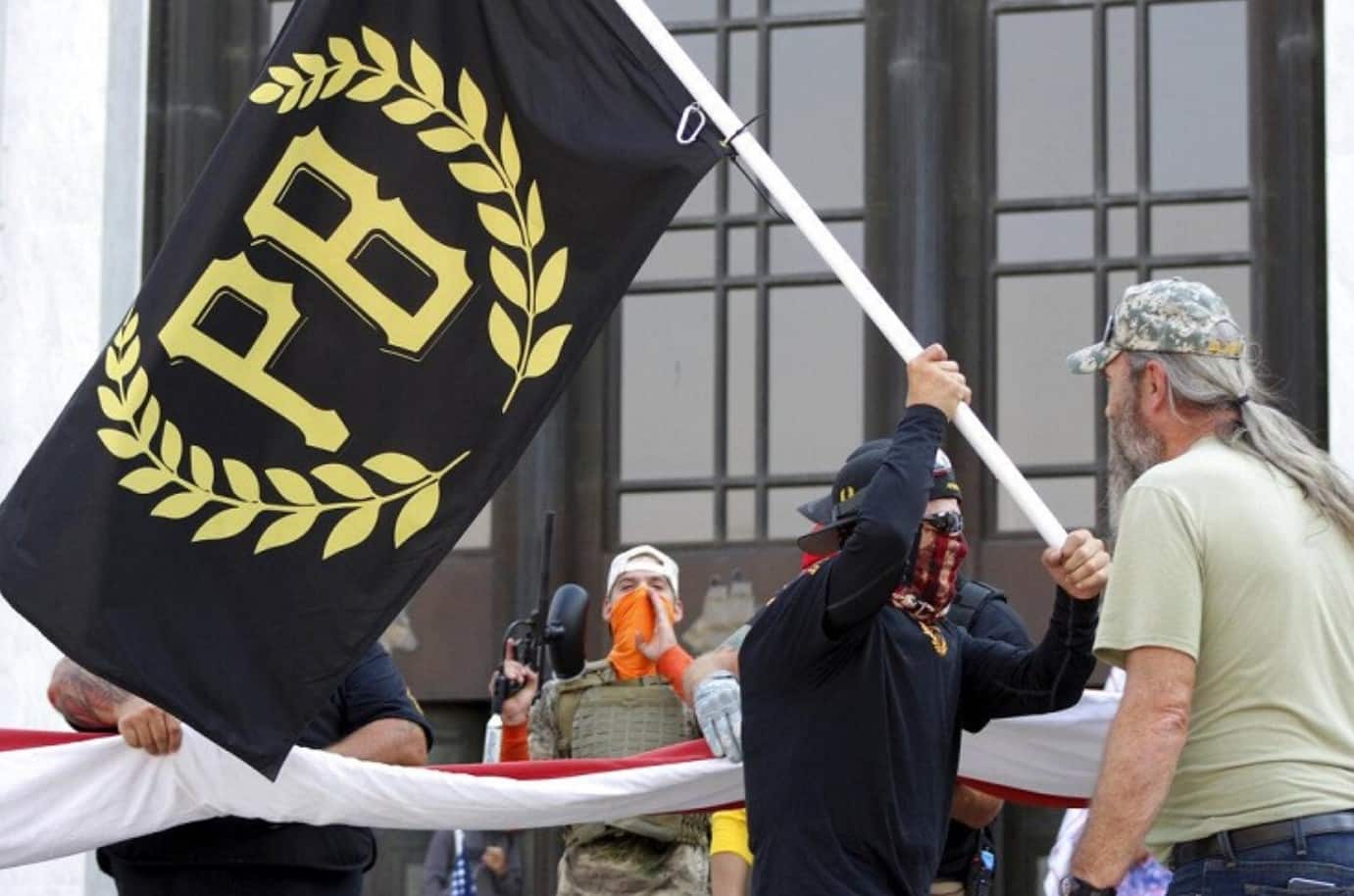 By Gordon Duff and New Eastern Outlook of the Russian Academy of Science (EST. 1816)

[ Editor’s Note: I added in this classic George Carlin video at the end of the article due to Ferdinand’s comment,  “All there in a 4 minute blurt of genius”. We always love to see readers adding in comments help take an article deeper…Jim W. Dean]

The world largely stopped trusting America under Trump, with some exceptions, certainly Israel and Saudi Arabia. Even with Trump gone, the fear of Trump returning is pushing nations like Iran into a negotiating stance on the JCPOA nuclear deal that is looking increasingly hopeless.

Europe is certainly terrified of the possible return of Trump or someone like him in 2024 and, because of this, looks at reproachment with the US as a temporary measure at best.

Politically, the US is not simply unstable, it has been shown to have a large bloc of violent and radicalized mostly “poor whites” willing to disbelieve everything the mainstream media says.

These same radicalized elements have deeply infiltrated the military, police and the FBI and have broad support from powerful financial elements as well.

We saw it all before, such as with the “Business Plot” in 1934 when large corporations tried to overthrow the US government using radicalized and disgruntled World War I veterans.

That goal was to put a leader in power in Washington as much like Adolf Hitler as possible. Many if not most historians would agree that Donald Trump is that “Hitleresque” figure.

An election ended Trump, for now anyway, but did it really change anything?

We are going to look at this and other ramifications of Americans’ trend toward totalitarianism and extremism.

The deals Trump cut with Saudi Arabia, despite knowing MBS was complicit in the Khashoggi murder or with the UAE on behalf of Israel, were largely predicated on Trump guaranteeing a second term.

You see, these deals are worthless if the US reenters JCPOA and sanctions are taken off Iran.

For the past 4 years, the United States, under Donald Trump, has backed out of nearly every agreement it has entered. Before Trump, Bush 43 saw need to abandon others, such as the International Criminal Court, in order to insulate a regime gone mad, that swept the world into decades of bloodletting after the events of 9/11.

Were historians to compare Trump and Bush 43 on the currently popular “Fascism scale,” which one really emulated Adolf Hitler?

One issue that separates Bush and Trump is 9/11. The mainstream media loves smearing anyone, almost anyone, that asks hard questions about 9/11, and there are so many hard questions.

Donald Trump was one of those who asked those hard questions when he took issue with the promoted narrative of 9/11 back in 2016:

After several statements from Trump about “controlled demolition,” the media sought to downplay and ignore it, a very curious tactic for a media that generally took every opportunity to belittle or smear Trump.

He has made other statements as well, but the insinuation is clear, that the Bush administration orchestrated 9/11 in order to push forward a radical agenda intended to create a police state at home, while looting the Middle East of its resources.

Suffice it to say that the Trump years, certainly a confusing and contradictory time, opened the door to considering the possibility that events such as 9/11 and, in particular, 9/11 itself, are never what they seem.

Joseph Biden has won four years in office. He will be 82 when his term is up. Thus far, he has erased many of the most cruel and egregious injustices Trump inflicted on America’s vulnerable, but it won’t be enough.

You see, Trump isn’t gone. Four years won’t erase the destruction wrong by the Fascist juggernaut that overwhelmed America. Behind the populist rhetoric, powerful financial interests seeded themselves into every aspect of American government, taking control of every regulatory group and most of the nation’s courts.

Nearly 40% of America’s protected wilderness was given to corporations under Trump.

In some areas of the country, freed of regulation by Trump acolytes, prices for natural gas and electricity have skyrocketed, tripling in some states, or as in Texas, increasing dramatically. From CBS News:

Brazos Electric Power Cooperative, which serves 16 distribution member co-ops that cater to more than 1.5 million Texans, said Monday that it accumulated $2.1 billion in bills during the severe cold that hit Texas between February 13 and 19.

As temperatures plunged and snow and ice whipped the state over Valentine’s Day weekend, much of Texas’ power grid collapsed, followed by its water systems. Tens of millions huddled in frigid homes that slowly grew colder or fled for safety. With gas-fueled power plants offline, wells frozen, a nuclear power plant shut down and iced-over wind turbines, the state experienced a severe electricity shortage, and wholesale prices for electricity spiked as high at $9,000 per megawatt-hour.

A normal price for electricity at the wholesale level is around $30 per megawatt-hour according to official sources.

The point, of course, is that there is no “populism,” simply the same kleptocracy seen time and time again under one guise or another, the real “ground zero” for the United States; maintaining poverty at home through propaganda and manipulation while using military power to loot the world.

The “return to normalcy” that NATO and the EU are now praising so loudly may well be not just extremely temporary, it may not exist at all.

The perception, and perceptions are, nowadays, mistaken and even fanciful, is that Trump was an isolationist and “grifter” who used foreign policy to push his own ideas while enriching himself with handouts from Saudi Arabia, Israel and China.

Others, including some in government, including those who are now running investigations, believe Trump has been an agent of a foreign power, tasked with destroying the United States.

The rationale behind that is an eye opener. Almost no one that lives in the US, Trump backers, Biden backers, those who are disappointed in both, is happy with the kind of nation America has become.

An America Blind to Itself

After losing the election, Donald Trump hasn’t gone away. Oh, the flags and banners are mostly gone, and to most Americans life is continuing, such as it is, with well over 500,000 dead and a crippled economy.

There is fear, fear that whatever Trumpism is or was, will return. State after state is passing legislation restricting voting rights while the US Supreme Court threatens to make mail in voting illegal.

Trump is gone but the tyranny he brought and the Bush era tyranny that made him possible is there, as are the billionaires behind it all. Forbes magazine outlines some of it, but more are popping up each day, as investigations reveal Trump’s web of convoluted personal finances that few believe will eventually land him in prison as we have just seen with Nicholas Sarkozy.

A study of history, and few Americans know anything of history, would reveal that America was always intended to be not just an oligarchy but a kleptocracy.

In 1913, the same year as the Federal Reserve Act, Colombia University historian Charles Beard published his consummate history of the American constitution. From Wikipedia:

“An Economic Interpretation of the Constitution of the United States argues that the structure of the Constitution of the United States was motivated primarily by the personal financial interests of the Founding Fathers. Beard contends that the authors of The Federalist Papers represented an interest group themselves. More specifically, Beard contends that the Constitutional Convention was attended by, and the Constitution was therefore written by, a “cohesive” elite seeking to protect its personal property (especially federal bonds) and economic standing. Beard examined the occupations and property holdings of the members of the convention from tax and census records, contemporaneous news accounts, and biographical sources, demonstrating the degree to which each stood to benefit from various Constitutional provisions. Beard pointed out, for example, that George Washington was the wealthiest landowner in the country and had provided significant funding towards the Revolution. Beard traces the Constitutional guarantee that the newly formed nation would pay its debts to the desire of Washington and similarly situated lenders to have their costs refunded.”

According to Beard, the land speculators and grifters of the 1780s, people now esteemed as “Founding Fathers” or “the Federalists,” stacked the deck against the American people, an effort that has led to what is now seen today.

The US Supreme Court, though its own decision, decided what its powers are. Supreme Court justices openly cavort with criminal oligarchs and warlords who have been shown, time and time again, to control the court and use it as a wrecking bar against Americans’ flagging democracy.

Did it ever flourish?

When one looks back to an America that supported the “Open Door” policy in China or the end of colonialism in Africa and elsewhere, were those stated policies ever more than a “pipe dream?”

What is key is this, there is certainly a world order, one that is, with equal certainty, multipolar. Trump taught us what economic war can look like, but taught us the futility, as well. The US economy is at its lowest ebb in its history, while its stated economic enemies under Trump rule, South Korea and China certainly, are doing far better.

Trump’s America handled economic war on the world with the same skill as it handled the COVID virus.

Then there’s this, is Biden better? Is there a plan?

And, worse still, if there is a plan, with America nearly engaged in a civil war, can any plan ever be implemented, or can any American action ever be trusted again?

For many around the world, unless something changes significantly in the United States, that answer is a resounding “no”.