Pizza outlawed in Georgia To Suppress the Vote

by Greg Palast for Buzzflash

[ Editor’s Note: Greg Palast is a muckraker in the old context, the kind we use to see in the big city news rooms before those publications had the kibosh put on them via loss of advertising by major companies.

This trend was eventually traced back to the advice of people friendly with a small country in the Mid East, the ad agencies that handled the major accounts. The threat of losing an account like General Motors had instant effect.

Georgia, and the Atlanta metro area had built itself up quite a reputation as a modern progressive city. While I was living there in the mid 80’s, it had become the mecca for rising black professionals.

I was surprised to read in the Atlanta Constitution one day that one of the biggest sources of black professionals moving into Atlanta was California, partly due to the lower cost of living, expanding professional job market, and lots of big city amenities.

Another article shocked me even more, a feature about the first ‘all black’ residential community on the East side of town, not something advertised as such, but where black professionals had formed a community where they would be “among their own’.

About the same time, news stories emerged that black students in colleges were pushing for their ‘own dorms’, wanting to take a pass on being mixed with white students. Why?…the same reason as above. They simply said they wanted to be among their own, so as for example, not having to listen to ‘white music’ in a mixed dorm.

But this turned out to just be a brief tweet in the news. Media quickly was advised by the civil rights minders that the latter did not want to see news coverage on this changing dynamic, and it stopped.

But Jim Crow is back in spades now, right out in the open with Georgia’s legislature leading the way by unapologetically passing new laws to suppress non-white voting. We will now have another round of court cases going to the Supreme Court.

I can’t make this up. The state of Georgia passed a law this week, HB 531, that outlaws handing out pizza slices and water to voters waiting for hours to vote. 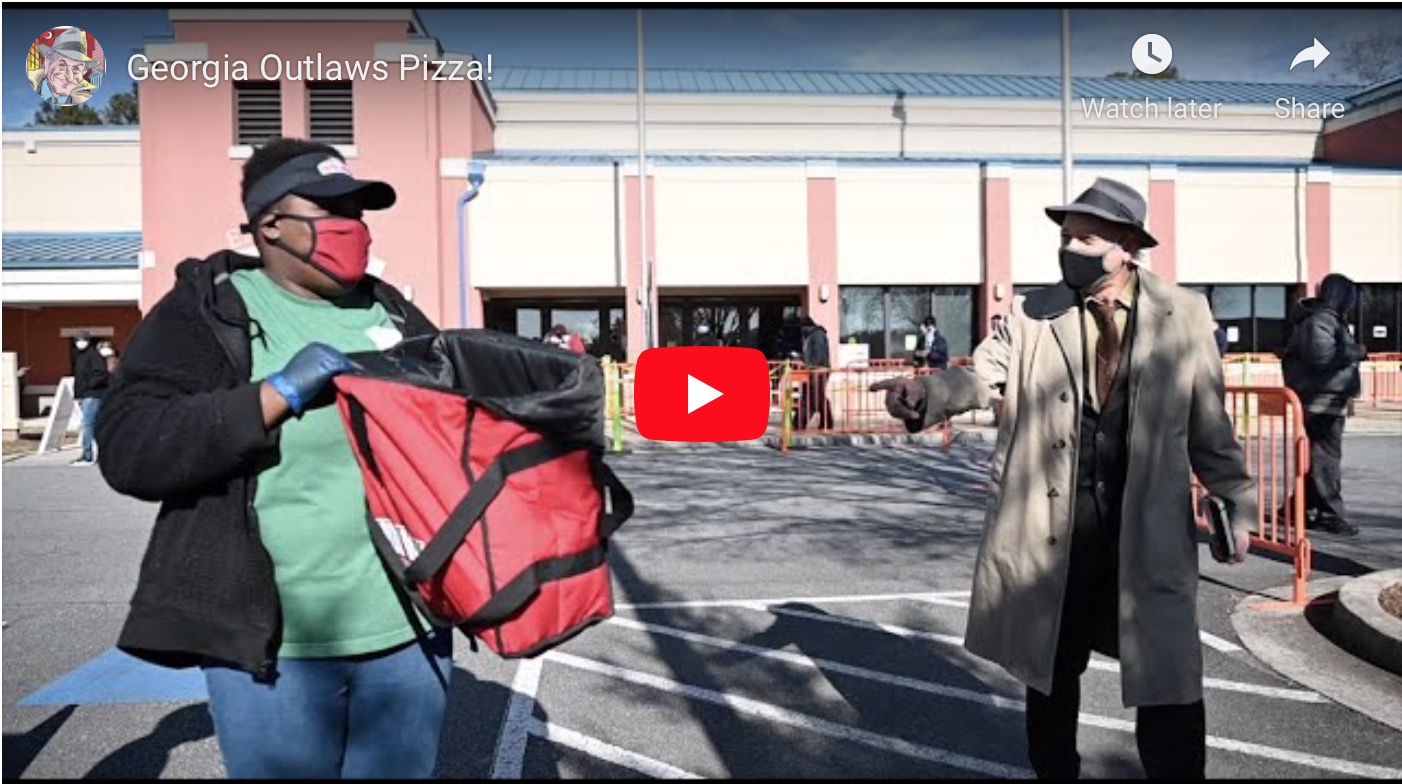 Investigative Reporter Greg Palast confronts illegal pizza pusher at Georgia polling station.
(photo: Jordan Freeman for Palast Investigative Fund).
But Georgia’s Republican Secretary of State Brad Raffensperger objected to the law because, he said, his office had already ruled that pizza at the polls is a crime. Before the Georgia US Senate run-offs, Raffensperger threatened groups that,

“offering food, drinks, or other items of value to voters waiting in line or those who have already voted is forbidden under Georgia law (OCGA § 21-2-570).”

Anyone handing pizza to a voter, according to Raffensperger, “shall be guilty of a felony.” No kidding.

I took my team to Georgia to investigate—and indeed, I found a whole gang of vote-manipulating criminals in Cobb County, an Atlanta suburb. They brazenly wore their gang colors, hats marked “Papa John’s.” I caught them, on camera, handing out calzones and water to voters standing in long lines in the Georgia sun.

(Calzones, a kind of pocket pizza, are as illegal at Georgia polls as heroin or crack, and, I can tell you, after tasting the evidence, just as addictive.)

As you can see on this film, I confronted the pizza pirates. “Are you trying to bribe voters?”

I tried to get the number of their “Papa,” but they claimed they didn’t know how to reach Mr. John, the El Chapo of melted mozzarella.

I was curious: Why were the lines so long? Was it some scheme by the pizza pushers to hook more addicts?

Turns out, the Republican-controlled elections board of Cobb County had shut down six of the eleven early voting stations. Coincidentally, all six of the voting stations closed were in African-American neighborhoods.

But voting rights lawyer Barbara Arnwine didn’t think it was a coincidence. Observing the growing line of voters there in Cobb County, Arnwine told me, “This is vote suppression!” meant to dissuade Black voters who would now have to drive up to 20 miles to cast a ballot. 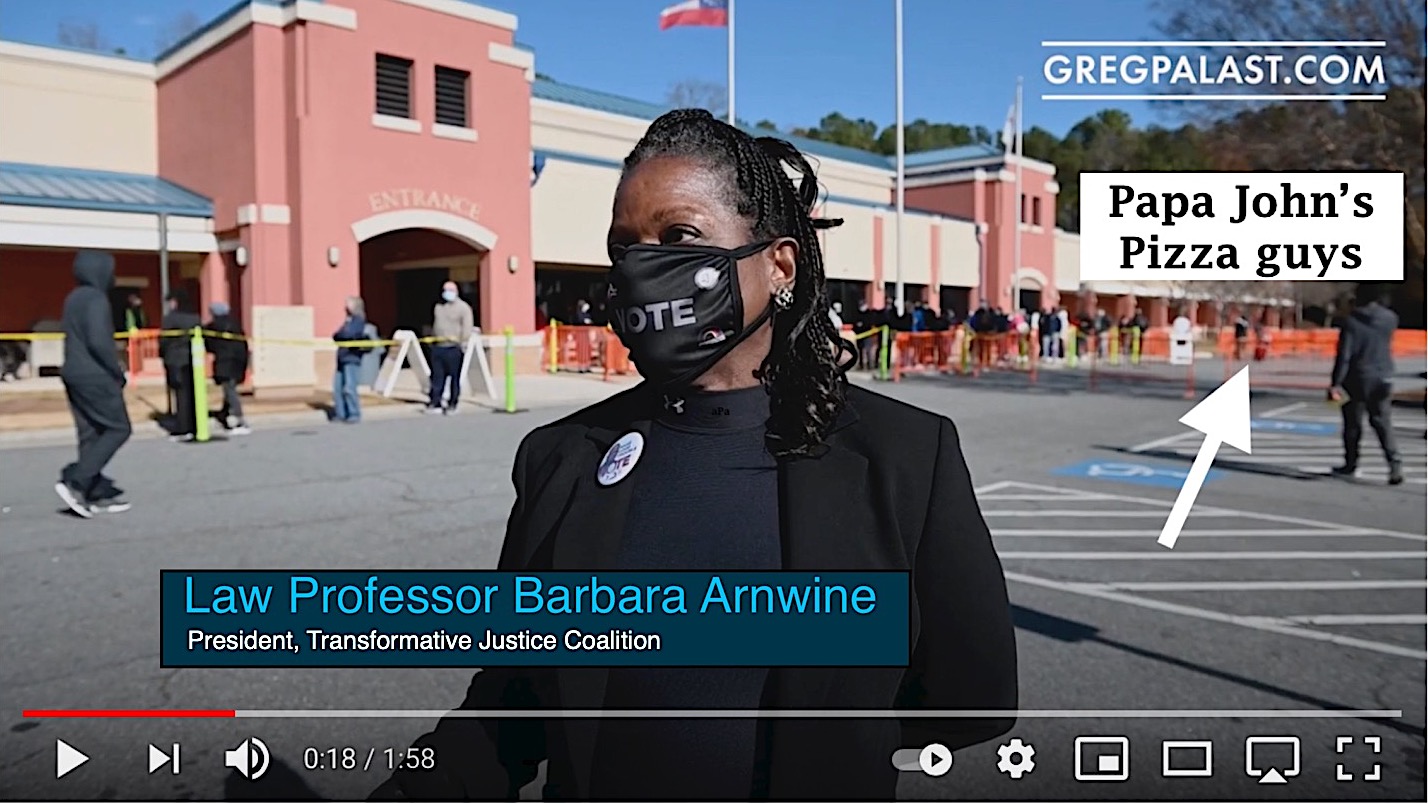 Voting Rights Attorney Barbara Arnwine in front of Cobb County, GA lines for early voting. (PIF/Freeman)
Rev. Jesse Jackson says Arnwine, founder of the Transformative Justice Coalition, is the nation’s top voting rights attorney. But, I feared, she could be just a front for the Papa John’s calzone cartel.

Arnwine complained that the Republicans reduced polling stations for the US Senate run-offs to five, “Knowing that during the general election they had three hour lines with eleven voting places.” And she added, “They didn’t cut one white polling site.”

Arnwine said that closing the early voting locations—a pattern seen across the state–caused voters of color to jam the lines at the remaining polling stations, leading to waits of up to several hours—tempting some to turn to the crime of drinking bottled water.

Our team investigated her claim, visiting one of the closed stations. And indeed, we found a voter there, Bradley Grayson, surprised his poll was shuttered. Nevertheless, despite the obvious preference of GOP officials, this African-American stubbornly insisted he would vote.

Two years ago, we encountered one voter, Christine Jordan, then 92 years old, after she’d waited in line to vote in Georgia. Jordan, Martin Luther King’s cousin, was refused a ballot because she’d been purged from the rolls by then Sec. of State Brian Kemp. My question was, if Mrs. Jordan had waited in line for two hours and accepted a bottle of water, or worse, a calzone, would she have been an accessory to this felony crime?

I called the Office of the Secretary of State to ask him if they wanted our evidence of “Papa” John’s crimes? So, far, no response.

It’s not just punishing voters with thirst and starvation. Altogether, the dozens of changes to the law passed by the Republican-controlled legislature this week seems aimed at making voting all but illegal for Georgia’s citizens of color. Some low-lights of the bill:

Gerald A Griggs, Attorney for Black Voters Matter and the NAACP calls Raffensperger the, “Vote Suppressor-in-Chief“. And now we can add, “Pizza Suppressor.”

Griggs, who represents both the Palast Investigative Fund and Black Voters Matter, is leading an all-star team of voting rights lawyers, including Arnwine, CK Hoffler, Jeanne Mirer and Fred Gray (famed for defending Rosa Parks) in suing the Secretary of State of Georgia to return 198,000 voters to the rolls whom Secretaries Kemp and Raffensperger wrongly removed from the voter rolls.

A federal court has ordered the state to turn over to plaintiffs Black Voters Matter and others the secret files that targeted these voters, a list suspiciously overweighted with minority and young voters, the Jim Crow purge system that blocked Mrs. Jordan and others from voting.

The purge was critical to Kemp’s win over Stacey Abrams in the gubernatorial race in 2018. But in 2020, a campaign by Black Voters Matter, Transformative Justice Coalition and others to contact purged voters identified by data uncovered by the Palast Investigations Team, helped preserve the voters’ choice in Georgia’s 2020 presidential election and US Senate run-offs.

Sec. of State Raffensperger is resisting returning voters to the rolls, even when these voting rights groups have identified, name by name, citizens wrongly targeted. The Sec. of State’s office falsely expunged citizens’ voting rights on grounds they’d moved their residences when, in fact, nearly 200,000 had not moved.

The Palast team interviewed several of these voters at the homes from which they’d supposedly moved.

All parties are aware that the Court halting the voter roll purges and restoring these voters’ rights will have a profound impact on the upcoming 2022 gubernatorial race in which Stacey Abrams is expected to run, and the simultaneous re-run of the US Senate race for the seat just won by Senator Rev. Raphael Warnock.