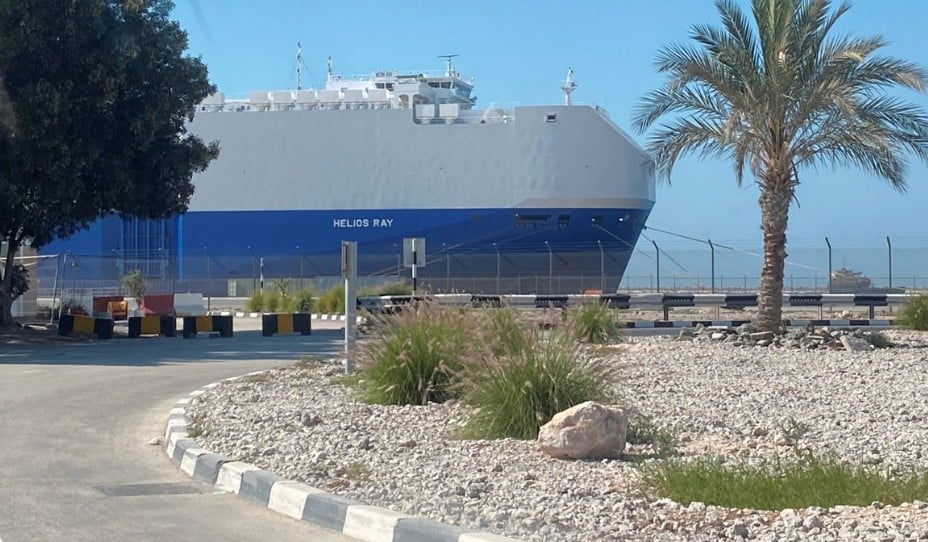 An Israeli-owned cargo ship earlier said it had suffered holes in both sides of its hull after a suspected blast while it was in the Sea of Oman, with Israeli Prime Minister Benjamin Netanyahu hastily accused Iran of attacking the ship, as Tehran categorically rejected the charge.

Iranian Ambassador to the United Nations Majid Takht Ravanchi has warned of consequences for Tel Aviv over any possible miscalculated measure in connection with last week’s incident in the Sea of Oman involving an Israeli ship, reports PressTV.

Without offering any evidence, Israel’s Prime Minister Benjamin Netanyahu has accused Iran of attacking Israeli-owned MV Helios Ray, a Bahamian-flagged roll-on, roll-off vehicle cargo ship, in the Gulf of Oman on 25 February, with the explosion raising security concerns in the region.

Netanyahu told the Israeli public broadcaster Kan the incident “was indeed an act by Iran, that is clear”.

“The incident has all the characteristic of a complicated false flag operation carried out by actors in order to pursue their malign policies and to advance their illegitimate objectives,” wrote Takht Ravanchi in a letter addressed to UN Secretary General Antonio Guterres on Friday.

The top Iranian diplomat underscored that Israel, by regularly levelling accusations and threats at Iran, is “playing victim to distract attention away from all its destabilising acts and malign practices across the region.”

​Iran’s UN envoy urged the international community not to lose sight of the “crimes, brutalities and threats” committed by Tel Aviv, particularly “its occupation of Palestine and parts of other countries”.

Israel’s “persistent military adventurism” in the volatile Middle East region was condemned by the diplomat, who stressed that Tel Aviv must “be held accountable for all such unlawful and reckless activities and also be reminded that it will bear all consequences as a result of any possible miscalculation”.

The blast struck the Israeli-owned MV Helios Ray as it was sailing out of the Middle East to Singapore on 25 February, leaving the crew unharmed. However, the vessel sustained two holes on its port side and two on its starboard side, just above the waterline, according to US defence officials. The damage sustained did not result in the pollution of the waterway.

​MV Helios Ray was in dry dock facilities at Dubai’s Port Rashid on Sunday, to receive repairs following the alleged blast. On Wednesday, it left the port, sailing along the Omani coast toward the Arabian Sea.

​It remains unclear what caused the blast on the Helios Ray, yet Israel’s defence minister and army chief indicated they deemed Iran responsible for an alleged attack on the vessel.

“Iran is the greatest enemy of Israel, I am determined to halt it. We are hitting it in the entire region,” AP reported Israeli Prime Minister Benjamin Netanyahu as saying.

Iran responded by saying it “strongly rejected” the claim that it was behind the explosion.
In a press briefing, the foreign ministry spokesman, Saeed Khatibzadeh, said Benjamin Netanyahu was “suffering from an obsession with Iran” and described his charges as “fear-mongering”.

Khatibzadeh also accused Israel of taking “suspicious actions in the region” targeting Iran in recent months to undermine the 2015 nuclear deal, and vowed a response.

“Israel knows very well that our response in the field of national security has always been fierce and accurate,” he said.

Iran has previously been accused of masterminding mysterious explosions damaging ships in the Gulf of Oman. Thus, the US, despite lacking proof, blamed Tehran for a series of explosions targeting six cargo ships between May and June 2019.

The United Arab Emirates launched a joint investigation probe with US and France, with the initial assessment determining that holes near or below all the ships’ waterlines were probably caused by explosive charges.

Initial findings of the international probe submitted to the United Nations Security Council (UNSC) by the UAE permanent mission to the UN in a joint statement with Saudi Arabia and Norway on 6 June 2019 stated “strong indications that the four attacks were part of a sophisticated and coordinated operation carried out with significant operational capacity.”

However, the statement failed to name any suspected perpetrator.