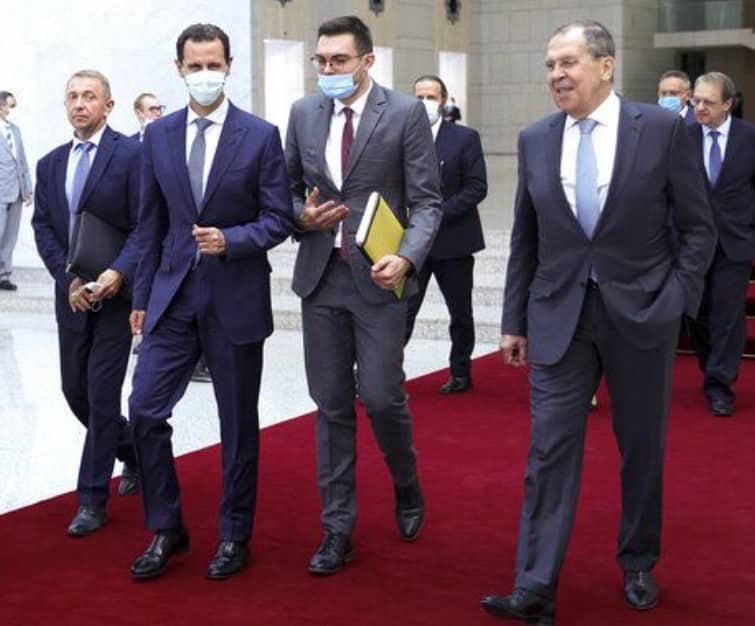 Syria’s return to the Arab League is emerging more and more clearly. This was notably confirmed by Sergei Lavrov’s Arab tour, which has just ended. An important diplomatic work at the origin of this reversal of the petromonarchies initially hostile towards Damascus, explains the specialist of the Middle East Roland Lombardi.

“Russia is engaged militarily in Syria to save the country. Today, it is a question of having a return on investment of this active and costly policy “.

At the microphone of Sputnik, the specialist of the region Roland Lombardi analyzes the Syrian part of the Arab tour of the Russian Minister of Foreign Affairs carried out from March 8 to 12. An intense week of meetings with his Qatari, Saudi and Emirati counterparts.

And this, only three months after a series of visits to Moscow by the heads of diplomacy of these same countries. An unprecedented rate of mutual contacts.

“Unlike that of the West, Russian policy is not based on ideology or commerce. She is listened to and respected for her pragmatism and realism. Lavrov’s arrival confirms Russia’s influential role in the region, ”says Roland Lombardi.

And the Syrian question occupies one of the central places in these multidimensional discussions between Russia and the Gulf countries.

Towards the return of Syria to the Arab League

Syria, which these days commemorates 10 years since the start of the devastating war, is in the grip of Western sanctions. The Westerners obviously counting on their positions. In a resolution adopted on Thursday, the European Parliament opposed any normalization with Assad’s Syria.

Since the Russian intervention at the behest of Bashar al-Assad in 2015, the latter’s government has held on, then reclaimed “useful Syria”, where the majority of the population is concentrated. Still escaping him is the jihadist pocket of Idlib, the northern border with Turkey occupied by Ankara and the oil areas in the east, under American control.

“By going to the Gulf, the Russian minister is trying to convince his partners of the benefit of Syria’s return to the concert of nations”, analyzes the geopolitologist.

Indeed, Sergey Lavrov considers that the return of Syria to the Arab League (whose participation was suspended at the start of the Syrian civil war in 2011) would contribute to stability in the whole region. “I can only welcome the progress in the collective opinion of Arab countries on the need for Syria’s return to the Arab League,” the minister said during his tour. We are always for the conjunction of efforts and not for disunity ”.

And the Gulf countries seem to accept it. In the wake of Sergei Lavrov’s visit, Saudi Foreign Minister Adel al-Joubeir said “Syria deserves to be back in the Arab arena. We support all efforts to resolve the crisis ”.

His Emirati counterpart said that it was necessary “to overcome the obstacles that stand in the way of cooperation with Damascus”. Mohamed bin Zayed, strongman of the United Arab Emirates, for his part, declared that “the return of Syria in its regional context is essential”.

As for Qatar, Minister Lavrov’s third stopover, the country has been participating for a year in a tripartite format on Syria, of which Russia and Turkey are also part. This structure is also used to find solutions to the Syrian settlement in accordance with UN Security Council resolution 2254.

“I can only welcome Qatar’s willingness to help improve the tragic situation in Syria […] this reflects the desire to help a fraternal Arab country,” Lavrov remarked after a meeting with his counterparts. Qatari and Turkish on the sidelines of his tour on March 11. At this meeting, these two former fierce opponents of Bashar al-Assad recalled “the importance of preserving the sovereignty of the Syrian Arab Republic”.

Syria: the Gulf turnaround, the work of Moscow?

These diplomatic efforts and the investments that should result from them will undoubtedly help Syria to rebuild itself. But several unknowns remain. The head of the Emirati diplomacy Abdullah bin Zayed Al Nahyane noted, “the main obstacle, it is the economic sanctions”, referring to the American law “Caesar” which literally suffocates the Syrian population and which de facto prohibits any cooperation with Damascus. And this is what greatly hinders Syria’s return to the Arab League, according to Sheikh Abdullah. As a reminder, the United Arab Emirates was the first Arab state to reopen its embassy in Damascus in December 2018.

“All the Arab Gulf States were initially for the departure of Bashar al-Assad. They funded militias, terrorist groups. But since the Russian intervention, these countries know that they have lost and readjust their policies, ”recalls Roland Lombardi. Indeed, since King Salman’s trip to Moscow in October 2017, Riyadh has reportedly considered Russia to be an integral part of the solution to the Syrian conflict. Since Moscow’s involvement, Syria is on the verge of once again becoming “accessible to its Arab neighbors,” generalizes Roland Lombardi.

Aware that this war is dragging on, Russia would therefore seek to influence diplomatically on the Syrian file, Judge Roland Lombardi.

“After the military, there is diplomacy, which in turn prepares the economy, investments, reconstruction, aid. Russia therefore facilitates future investments from the Gulf, but also from China ”. Investments that Syria needs so badly after ten years of destruction. The cost of its reconstruction is estimated at between 250 and 400 billion dollars.