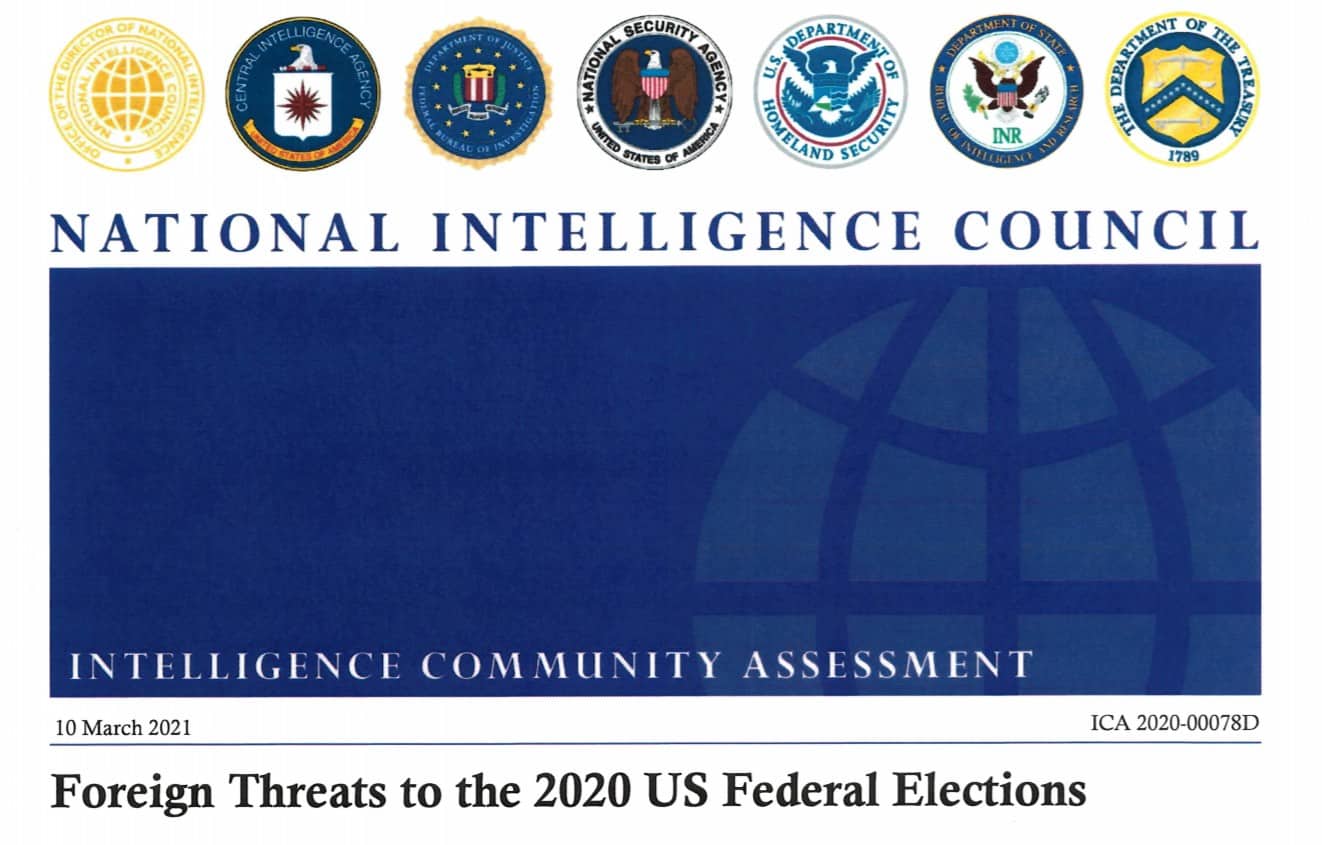 VT: In November 2020, the US Department of Justice under William Barr accused VT of supporting Joe Biden for US President as part of a Russian influence operation against the United States. A report, released this week by the Director of the Office of National Intelligence, however, totally supports VT’s assertions that it was targeted for opposing Russian interference, not the other way around:

Cited as proof, as requested by disgraced former Attorney General William Barr, at the request of Trump personal attorney Rudy Giuliani, were the following, taken from DOJ documents:

According to the DOJ, republishing the Duff article in the US is proof that VT was involved in a Russian influence operation to promote Joe Biden against Donald Trump.

A similar DOJ program was tasked with proving Biden was supported by China as well.  From Reuters:

The assessment was made in a 15-page report into election interference released by the Office of the Director of National Intelligence. It underscored allegations that Trump’s allies played into Moscow’s hands by amplifying claims made against Biden by Russian-linked Ukrainian figures in the run-up to the Nov. 3 election. Biden, a Democrat, defeated Trump, a Republican, and became president on Jan. 20.

The report also punctured a counter-narrative pushed by Trump’s allies that China was interfering on Biden’s behalf, concluding that Beijing “did not deploy interference efforts.”

“China sought stability in its relationship with the United States and did not view either election outcome as being advantageous enough for China to risk blowback if caught,” the report said.

The new report said Putin knew of and “probably directed” the election interference efforts. As an example, Putin “had purview over the activities of Andriy Derkach,” a Ukrainian lawmaker who played a prominent role in the effort and has ties to Russian intelligence, the report said.

And now from Politico, outlining how Derkach worked personally with Rudi Giuliani in promoting efforts against Biden (and the United States) while acting as a Russian intelligence officer:

Derkach, who was previously identified as a malign actor by the intelligence community, met with President Donald Trump’s lawyer Rudy Giuliani in Ukraine in December, as Giuliani mounted an effort to obtain derogatory information on Biden’s relationships in Ukraine. On Thursday, the administration went even further in tying Derkach to the Kremlin.

“Derkach, a Member of the Ukrainian Parliament, has been an active Russian agent for over a decade, maintaining close connections with the Russian Intelligence Services,” Treasury found. “Derkach has directly or indirectly engaged in, sponsored, concealed, or otherwise been complicit in foreign interference in an attempt to undermine the upcoming 2020 U.S. presidential election.”

VT asserts that the DOJ was a prime asset, on behalf of Russia, in promoting this false narrative.

The NEO article cited, written by Gordon Duff and published in English and Russian for an almost entirely Russian audience, begins as follows: 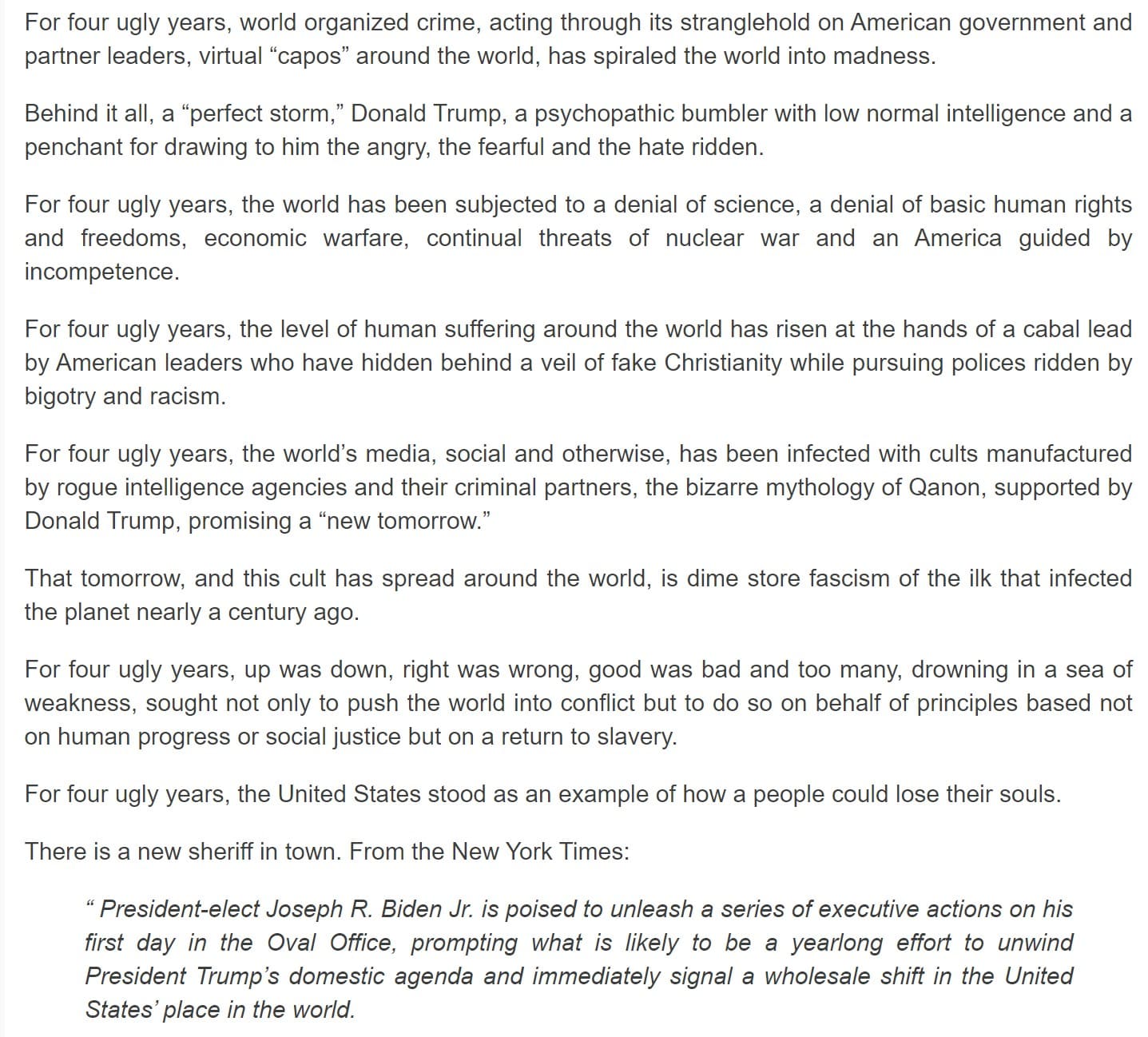 The Trump DOJ contended, as disputed by the Office of National Intelligence in their March 10, 2021 report, that any press organization that openly criticized Trump’s policies and favored Joseph Biden must be Russian, an assertion that runs directly the opposite of common sense.

Additional investigations by the FBI’s Domestic Terrorism and Counter Intelligence Divisions are finding the same ties, to Russia through Derkach, Giuliani and other Trump insiders including several presidential pardon recipients, tied to the concurrent “Stop the Steal” efforts that led to the violence of January 6, 2020.

Direct ties between those who organized the January 6 event, some who financed it and those meeting with Russian intelligence assets, as described by the ONI report, are under investigation.

Additionally, pro-Trump organizations, not just the White Supremacist militias but the NRA and others, have been accepting money from Russia, through Bitcoin but also through illegal contributions as with the $30 million Russia laundered into the Trump campaign through the NRA.  From Vanity Fair:

The F.B.I. and special counsel Robert Mueller are investigating meetings between N.R.A. officials and powerful Russian operatives, trying to determine if those contacts had anything to do with the gun group spending $30 million to help elect Donald Trump—triple what it invested on behalf of Mitt Romney in 2012. The use of foreign money in American political campaigns is illegal. One encounter of particular interest to investigators is between Donald Trump Jr. and a Russian banker at an N.R.A. dinner.

The Russian wooing of N.R.A. executives goes back to at least 2011, when that same banker and politician, Alexander Torshin, befriended David Keene, who was then president of the gun-rights organization. Torshin soon became a “life member,” attending the N.R.A.’s annual conventions and introducing comrades to other gun-group officials. In 2015, Torshin welcomed an N.R.A. delegation to Moscow that included Keene and Joe Gregory, then head of the “Ring of Freedom” program, which is reserved for top donors to the N.R.A. Among the other hosts were Dmitry Rogozin, who until last month was the deputy prime minister overseeing Russia’s defense industry, and Sergei Rudov, head of the Saint Basil the Great Charitable Foundation, one of Russia’s wealthiest philanthropies.  Read more…here

After all, Russia’s primary publication, RT and Sputnik, as outlined in the ONI report, smeared Biden and blindly backed, not only Trump but Fascist and White Supremacist organization.  The level of bias toward Trump shown in the Russian media was and is overwhelming.

That the DOJ chose to put forth assertions that rival QAnon and many of Trump’s most outrageous statements is, in itself, an indication of pro-Russian bias by the Trump/Barr Department of Justice.

The handling and suppression of the Mueller Report, the misrepresentations and censorship would support this as well.

The US Department of Justice improperly censored portions of the Mueller report dealing with potential criminal charges and Russia’s hacking of the Democratic National Committee, a federal judge ruled Wednesday.

In response to a complaint brought by BuzzFeed reporter Jason Leopold, US District Judge Reggie Walton ruled that Attorney General William Barr’s department must release the redacted segments — including portions related to the 2016 Trump campaign’s interest in DNC emails stolen by Russia — by November 2, a day before the US election.

According to BuzzFeed, the ruling means the Justice Department “will be obliged to unveil at least 15 previously blacked-out pages from volume one of special counsel Robert Mueller’s 448-page report” on Russian electoral interference.

In March 2020, the same judge, appointed to the bench by former President George W. Bush, chastised Attorney General Barr for having issued a “distorted” and “misleading” summary of the Mueller report.

Washington (CNN)The US intelligence community has assessed that Russia attempted to interfere in the 2020 election by conducting influence operations aimed at “denigrating President Biden’s candidacy and the Democratic Party, supporting former President Trump, undermining public confidence in the electoral process, and exacerbating sociopolitical divisions in the US,” according to a new report released by the Office of the Director of National Intelligence Tuesday.

The landmark intelligence report provides the most comprehensive assessment of foreign threats to the 2020 elections to date, detailing extensive influence operations by US adversaries including Russia and Iran that sought to undermine confidence in the democratic process, in addition to targeting specific presidential candidates.
But while the report concludes that multiple foreign adversaries did attempt to interfere, it also notes there are “no indications that any foreign actor attempted to alter any technical aspect of the voting process in the 2020 US elections, including voter registration, casting ballots, vote tabulation, or reporting results.”
That echoes what the Department of Homeland Security’s cyber arm said the day after the 2020 presidential election. “We have no evidence any foreign adversary was capable of preventing Americans from voting or changing vote tallies,” CISA said at the time.
Russia’s efforts to influence the 2020 elections feature prominently in the report, which details how “proxies linked to Russian intelligence” were used to push unsubstantiated claims about Biden to into the American mainstream.
“A key element of Moscow’s strategy this election cycle was its use of proxies linked to Russian intelligence to push influence narratives — including misleading or unsubstantiated allegations against President Biden — to US media organizations, US officials, and prominent US individuals, including some close to former President Trump and his administration,” the report says.