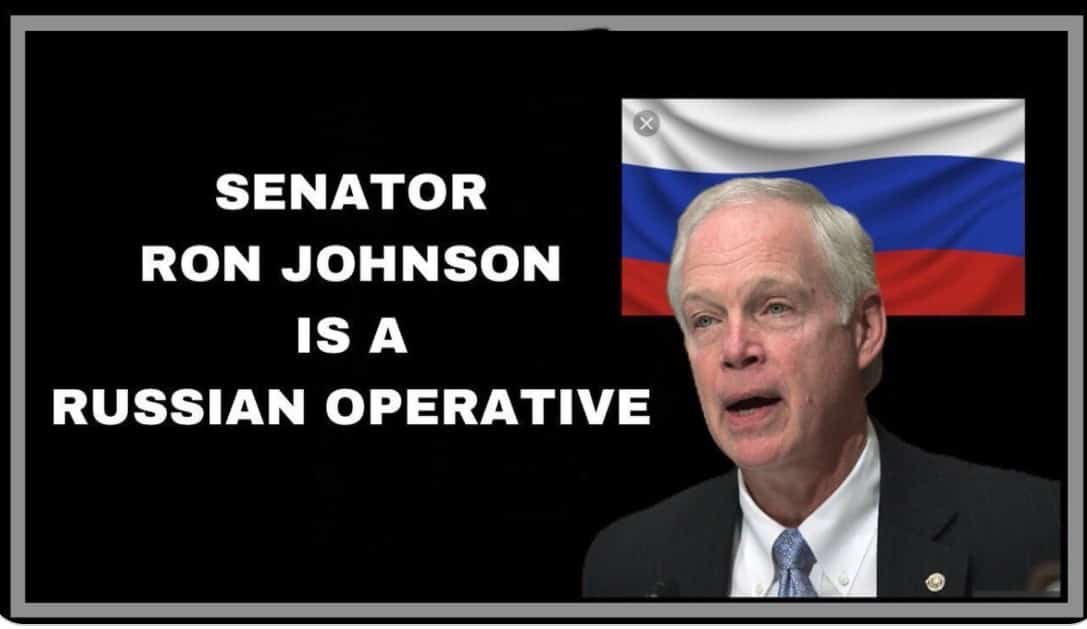 VT: The facts about Ron Johnson’s ties to not only Oath Keepers and Proud Boys but Russian intelligence as well, as reaffirmed by the March 2021 ODNI report, was well known in 2020.

VT’s own investigations, which are regularly monitored by the FBI who has asked to keep briefed on our progress, show both Oath Keepers and Proud Boys to have strong ties to Russian intelligence through Trump’s network exposed by the ODNI.

But the real meat is here in this Just Security report and the fact that Trump’s Department of Justice not only enabled key Trump assets and 4 senators to openly work for Russia but allowed Russia to infiltrate the FBI and police organizations around the US.

by Ryan Goodman and Asha Rangappa

Broadcast from Russia on July 4:

Earlier this month, Johnson defended himself on a local Wisconsin news station saying, “What have I published, what have I reported on, that is not true, that is any form of Russian disinformation? There has been nothing.” Similarly, in his 11-page letter, Johnson asserted, “It is neither me, Chairman Grassley, nor our committees that are being used to disseminate Russian disinformation.”

The senator surely knows better, and his 11-page defense of his actions reveals it. Published on Monday, Aug. 10, the letter itself contains apparent products of Russian disinformation.

Fellow Republican Senators — including the previous and current Chairs of the Senate Intelligence Committee Sens. Richard Burr and Marco Rubio — have warned Senators Johnson and Chuck Grassley that their Ukraine investigations could aid the Kremlin. Johnson and Grassley appear committed to going further down that path regardless, taking some of their Republican colleagues down with him.

We provide a roadmap for understanding this disinformation operation currently in progress, using U.S. elected officials as a vehicle.

6. Andrii Derkach, a pro-Russian Ukrainian lawmaker, identified by U.S. intelligence as running a disinformation campaign in conjunction with the Kremlin to damage Biden’s candidacy in support of Trump in the 2020 election

7. Andrii Telizhenko, former Ukrainian diplomatic aide; reportedly identified by the FBI as a conduit for Russian disinformation to damage Biden in the 2020 election

Russia’s many paths to Sen. Johnson

There are three channels of Russian disinformation that have apparently affected Sen. Johnson’s Ukraine-related investigations.

Channel 2. Russian-linked Ukrainian operatives spreading disinformation via media outlets, which have been picked up and expressly relied upon by Sen. Johnson.

In this piece, we will discuss the first two channels together because of how they relate to Johnson’s 11-page denial.

Before doing so, let’s fairly quickly dispatch with the two Ukraine-related conspiracy theories that Sen. Johnson is “investigating.” These are both conspiracies that have reportedly been advanced as part of the Kremlin’s disinformation campaign via Russia-linked Ukrainian operatives.

Johnson’s investigations include a conspiracy theory that Ukraine was involved in election interference in 2016 to defeat Trump, an idea that emanates in large part from an article by Kenneth Vogel in Politico in January 2017. The main thrust of the somewhat circuitous article is that Ukrainian officials were working with the DNC to promote Hillary Clinton.* This bold claim appears to be almost entirely sourced by one person: Andrii Telizhenko. (More on him, below)

Since its publication over three years ago, Vogel’s account has been debunked by several outlets, including fact checks by the Associated Press, BBC, Washington Post (here, here, here), and the New York Times (where Vogel is now a reporter). Even Politico has backtracked on Vogel’s reporting, as others have observed. Nearly two years after his article appeared, Politico reported, “No evidence has emerged to support that idea.”**

In addition, during the impeachment hearings, current and former senior US officials debunked the conspiracy theory involving Ukraine and the 2016 election, under oath.

That includes the State Department’s top Ukraine expert George Kent (“no factual basis”), Fiona Hill (“a fiction”), Lt. Col. Alexander Vindman (“I am, frankly, unaware of any authoritative basis for Ukrainian interference in 2016 elections”), Ambassador Marie Yovanovitch (“those elements that you’ve recited don’t seem to me to be the … kind of a plan or a plot of the Ukrainian government to work against President Trump”), and David Hale (in Senate hearings in Dec. 2019 saying he is not aware of any evidence that Ukraine interfered in the 2016 election).

Shokin was fired at the request of then-Vice President Biden, who did so with the knowledge and backing of President Obama, members of the U.S. Congress (including Sen. Ron Johnson), and the European Union, all of whom had deemed Shokin too corrupt to promote rule of law reforms that were a condition of U.S. aid. Indeed, the US team explicitly pressured the prosecutor’s office because it had blocked UK and Ukrainian investigations of Burisma.  read more…

How Sen. Ron Johnson’s Investigation Became an Enabler of Russian Disinformation: Part I

The Life and Adventures of Ron Johnson: His Journey Through “Multiple Untruths” to the Fable of Obamagate