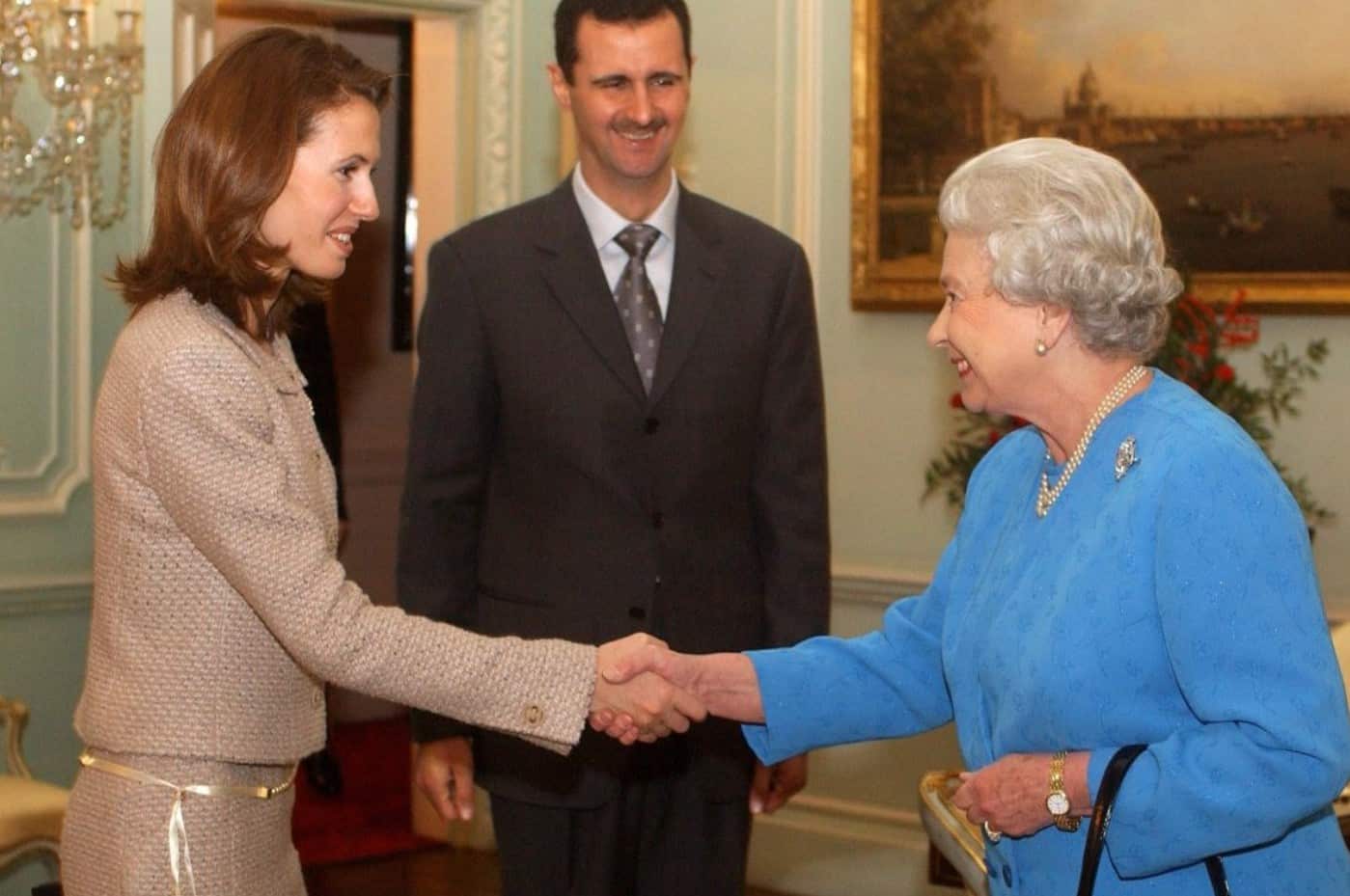 VT: If there were ever one person without guilt on this earth, it is Syria’s first lady, simple as that.

The charges come from Tony Cadman, a self ordained human rights advocate whose solution for the Palestinian conflict requires total submission, and nothing else, to apartheid Jewish only authority in Israel.

Cadman is seeking this vicious attack on Syria’s first lady in response to Israel facing war crime charges with the ICC.  Cadman is a stated enemy of the UN’s ICC, the only legitimate international authority in this arena.  Britain’s disgraced and scandal ridden London Metropolitan Police, with a long history of pedophilia, by long we mean over 100 years.

What many who rush to judge are stepping into is a centuries old battle to establish representative government in the Middle East and the opposing Freemason groups who created Islamic extremism and terrorism and its secret partnership with Likudist Zionism.

The Syrian first lady has been accused by a London based law firm of terrorism and war crimes, which stem from her support of the Syrian Arab Army (SAA), through her speeches, meeting with and comforting the mothers of slain soldiers, and meeting with the women’s branch of the SAR.

The crime she is accused of is patriotism, and support of the legitimate armed forces of the government of Syria, who have battled Radical Islamic terrorists, such as groups affiliated with Al Qaeda, and the Islamic State (ISIS).  The SAA has been fighting groups that are recognized by the UN, US, and EU as terrorist groups.  The UN charter states all members must fight terrorism wherever they find it.

The British-born wife of Syria’s President, Bashar al-Assad, is facing possible terrorism charges and the loss of her British citizenship after the police opened a preliminary investigation into claims she has incited, aided, and encouraged war crimes by the Syrian government forces.

She is being investigated in response to legal complaints alleging her speeches and public appearances in support of the Syrian army implicate her in its crimes, including the use of chemical weapons.

The London Metropolitan Police war crimes unit began its inquiries into Asma al-Assad earlier this year and is determining if there is enough evidence to launch a full investigation.

“The evidence compiled, in our view, legally speaking, far exceeds what may be considered reasonable comment or mere propaganda and amount to the incitement, encourage and/or aiding and abetting of war crimes and crimes against humanity,” said Toby Cadman, the joint head of chambers at Guernica 37.

“What she is suspected of doing is having incited acts that have resulted in death in Syria. Meeting with troops, making public statements, glorifying conduct of the army that has resulted in half a million deaths and the use of chemical and other forms of banned weapons. It is not just that she is the wife of the president, our allegations are she has actively campaigned and actively participated in those crimes and so she must face justice,” Cadman said.

Asma Akhras was born in 1975 in Acton, in west London, and educated in London before becoming Syria’s first lady in 2000.

She was employed by the investment bank JP Morgan and worked in Paris, New York, and London, where she specialized in mergers and acquisitions.  She had been working two years when she resigned to be married.

The Syrian Arab Army (SAA) is the national military force.  The soldiers are drafted from all able-bodied Syrian males who are at least 18 years of age and not enrolled in University.  The fighting force is Syrian exclusively and foreigners or mercenaries are prohibited. Like any national army, they are fighting to defend their land and families. Service is mandatory, and those serving are from every community in Syria: Christians and Muslims.

The forces are protecting the borders from invasion, and civilians from terrorists or foreign occupations.  The civilians of every country on earth are depending on their national army for protection and defense.  A civilian might be able to defend their home and family with a rifle, but they would be defenseless facing a tank confiscated by a terrorist group, or a Turkish military helicopter, like what occurred in Kessab on March 21, 2014.

Kessab, a Christian village in northern Syria, was attacked, invaded, and occupied for three months by the US-sponsored Free Syrian Army (FSA), along with their allies, Al Qaeda foreign terrorists, who used Turkey as their transit point.

It was the SAA who fought the international terrorists for three months and liberated the village, where the terrorists had raped, maimed, kidnapped, and looted.

War crimes of the ‘rebels’

The US-sponsored and supported FSA have committed war crimes and atrocities, which were reported by western media sources as early as 2012. The US tried to portray the FSA as ‘freedom fighters’ and ‘moderate rebels’; however, they beheaded, ate the flesh of humans, and instituted Sharia law (Islamic law) in areas they controlled.  They were never secular, or moderate, as evidenced by their early banner “Christians to Beirut, Alawis to the grave.”

The FSA lacked the support of the majority of the Syrian people.  They had a loyal base, those following the ideology of the Muslim Brotherhood, which is based on the same Radical Islamic principles as ISIS. The FSA supporters were a minority in Syria, and this led to their defeat and demise. They were banking on the SAR breaking down and defecting to the FSA, but that never happened.  Once the FSA began to be defeated by the SAR, they called on their allies Al Qaeda, and international terrorists from the four corners of the earth began flooding into Syria from Turkey.

In 2014, the Islamic State (ISIS) took control of a large portion of Syria. The SAR fought ISIS but became weak due to fighting on several fronts, not only ISIS but the Al Qaeda affiliate in Syria, Jibhat al-Nusra.  In late 2015 the Russian military arrived to fight alongside the SAR to fight ISIS, as well as Jibhat al-Nusra, which is designated as a terrorist group by the UN, US, and EU.

Idlib is the last terrorist-occupied area in Syria, and Hayat Tahrir al-Sham holds about two million people as human shields.  The group had formerly been named Jibhat al-Nusra, but after the UN, US, and EU had designated them a terrorist group, they changed their name since the US had been supporting them as ‘rebels’ in Idlib. The name change was to re-brand them and allow the US and their Arab Gulf allies to continue supporting the terrorists.

In May 2013, Carla Del Ponte, a former Swiss attorney-general and prosecutor with the International Criminal Tribunal for the former Yugoslavia (ICTY), said evidence points to the ‘rebels’ using sarin gas.  She was a leading member of a UN commission of inquiry.

In April 2018 veteran Middle East war correspondent Robert Fisk went in search of the chemical claims made in Douma.  Fisk had maintained an anti-Assad stance throughout the war, but he went to Douma with open eyes, looking for the truth. What he found there was the other side of the video shown around the world. After interviewing doctors, nurses and bystanders he found the gas video was patients overcome not by gas but by oxygen starvation in the tunnels and basements in which they lived, on a night of wind and heavy shelling that stirred up a dust storm.

The terrorists had everything to gain from using chemicals on civilians, to elicit a military response from the US against the SAR.  Though chemicals were proven to be used, there has never been any proof that it was the SAR who used them.

The accusations against Asma al-Assad are about judging the legality of the SAR.  In any war, there are the innocent who are affected by being caught in the middle.  To judge the actions of the SAR in Syria, the people of Aleppo, Homs, and Damascus must be consulted. The question of who liberated their neighborhoods from armed terrorists will be answered by, “the SAR”.  If the SAR were believed to be gassing civilians, wouldn’t the civilians in Syria be in fear and loathing of the troops? Yet, most civilians remained in Syria, weathering the war, and sending their sons, brothers, and husbands to the SAR.  Some who left Syria were politically opposed to the Syrian government, but the majority left as economic migrants, seeking a safe place free of terrorism, and the opportunity of an income.

The accusations brought by Guernica 37 in London are part of the western pressure on the Syrian government, which began in March 2011 in Deraa.  Syria was never a civil war; it was a foreign-backed project for ‘regime change’ drafted in Washington, DC., Paris, and London.