by Phil Butler, with New Eastern Outlook, …and the Institute of Oriental Studies of the Russian Academy of Sciences, a research institution for the study of the countries and cultures of Asia and North Africa.

[ Editor’s Note: Trump, who suckered a segment of American voters with his con of “draining the swamp,” followed that up in office by not stimulating the economy with big infrastructure spending. He gave big business a big tax cut, and it used a major portion of the bonus funds to do big stock buybacks to run their stock prices up.

The hedge fund guys were all aboard the Trump ‘insiders’ train. He then used smoke and mirrors to keep the public distracted from whose pockets the stock pumping money went into. That Obama had left him a relatively good economy became a buried footnote. 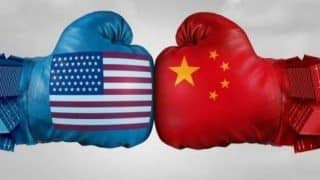 Trump, knowing he needed a bad guy to stand up to so he could get foreign policy media attention chose the easiest mark, China, due to the lopsided trade deficit. I was among those basically on board, as China has pilfered US intellectual property on a huge scale.

China knew this, too, and was amenable to making compromises. But then Trump pushed the envelope on the 5-G machine. As he was working the EU over at the same time on our upside down balance of trade, he went full bore anti-China 5G in the West, which struck a positive chord there.

Canada was onboard the no Chinese 5G in a jiffy. That allowed Trump to portray himself as protecting the rest of the world from Chinese technological dominance, despite much of that having been based on their leadership having prioritized domestic development over military. As Phil Butler notes in his piece below, who has heard anything about China’s Mars mission, banished from Western media?

So what Trump and the US military did was work together to create new external enemies to replace the forever war on terror scam that has about run its distance. The Russia-China devil has become their new cash cow.

Forget trying to tag me as a Russian or China lover. I have no contacts our passions other than wanting to tour the museums someday.

I am old enough to have seen the military bogeyman con in my lifetime that trumps investing more in the non military economy, like fixing the ridiculous health care system we have, when there are European models we could borrow that are much better.

But that would knock a lot of those big medical company political donators off the funding list for our Congress. As Talking Heads said in their song, “Same as it ever was…same as it ever was.”… Jim W. Dean ]

If I were China, I’d abandon Earth for a friendlier planet in another corner of the galaxy. Have you read the news from Google lately? The rulers of the internet just don’t have anything good to say about the Chinese. And I mean nothing at all.

Isn’t it strange to anyone else? I mean, how can anyone in the west hope to have cordial political relations with a country so implausibly hated?

China has built the world’s biggest navy now, and CNN is seeding the American airwaves with fear over what Beijing is going to do with it. Heavens to Murgatroyd, what if they do the same thing America does with her navy? Another news headline reads, “Chinese Hacking Spree Hit an ‘Astronomical’ Number of Victims.”

On this one, White House press secretary Jen Psaki (yes, her again) which means the Biden administration is already getting set to try and put the squeeze on the Chinese from Washington.

The US State Department has lodged an official complaint, and the Japanese are whining because their citizens are experiencing post-trauma over the swabbing test. God forbid if a New York lawyer gets hold of a swab victim from America!

In other news, China is now teaching masculinity to boy citizens in a move to ensure nothing but tough guys roam there. No, I am not kidding. NBC even dug up a young boy who was so shaken by being called “too girly”, to infuriate California ultra-liberals over another country daring to address gender roles in such a way. I guess.

Why is this even a story? But, the answer is simple. Anything that makes “them” undesirable, makes “it” okay for the rudderless American idealists out there. What about letting “them” make their minds up about gender, equality, and stop pressuring the world to conform to the liberal order’s extremes? Ah, that’s another story.

China’s winning the digital currency race. China is leading the brain-computer fusion race. China’s carbon emissions will go through the roof unless “we” do something. China needs a baby boom (yeah, really) or they will die out. Beijing has a plan to take over the world post-pandemic (New York Times).

And the US Senate has approved a bill to tighten controls on China-funded Confucius Institutes on US university campuses. I could go on, and on, and on, and on, but you get it. The hardest thing to find these days is a positive story about the Chinese. And the bad press has taken a toll.

Unsurprisingly, a new Pew Research Center survey shows “Americans’ opinions of China have soured in recent years.” Cue the bubble-brained blonde Atlanta newscaster with both hands beside her head cooing “No, say it isn’t so!”

In this report, about 4% of the respondents had some positive response on China, most of those being about the country’s long traditions and culture. As you might expect, people who said they follow the news on China were twice as likely to say something bad about the country.

Finally, even when the good news about China or Russia does appear in the western press (3 pages into Google News), there’s always the sub-plot, the insinuation that these countries are not as good as western nations. Take a Yahoo! Finance report on Russia, China, and India filling the void for COVID-19 vaccines for poorer countries.

The story makes the life-saving drugs a political football and sits the WHO and western authorities in judgment to, as the story puts it tells us the WHO is going to bring the Russians and the Chinese up to snuff with stringent global regulatory standards.

Oh, and I forgot to mention that the United States State Department is now applauding Germany’s plan to patrol the South China Sea this year! This, from Stars & Stripes, the US military magazine, makes me realize that the line between western media and military propaganda no longer exists.

Just to be different, I think it’s important that I report here that China is now Europe’s leading trading partner supplanting the United States. China’s Generation Z is emerging as the most economically advantaged and empowered generation in Asia, and most of the world.

And China’s Tianwen-1 Mars mission is already sending back fantastic images and data from the red planet. I’ll bet not one of my colleagues in America bothered to search down 14 pages in Google News to find this good China story. But you read it here on NEO. Yes, China can fly to Mars. No, the Chinese are not some banana republic. And yes, our media is brainwashing Americans to keep us scared, angry, and pretty stupid.

Hey, maybe the Chinese are planning to leave Earth for friendlier pastures!