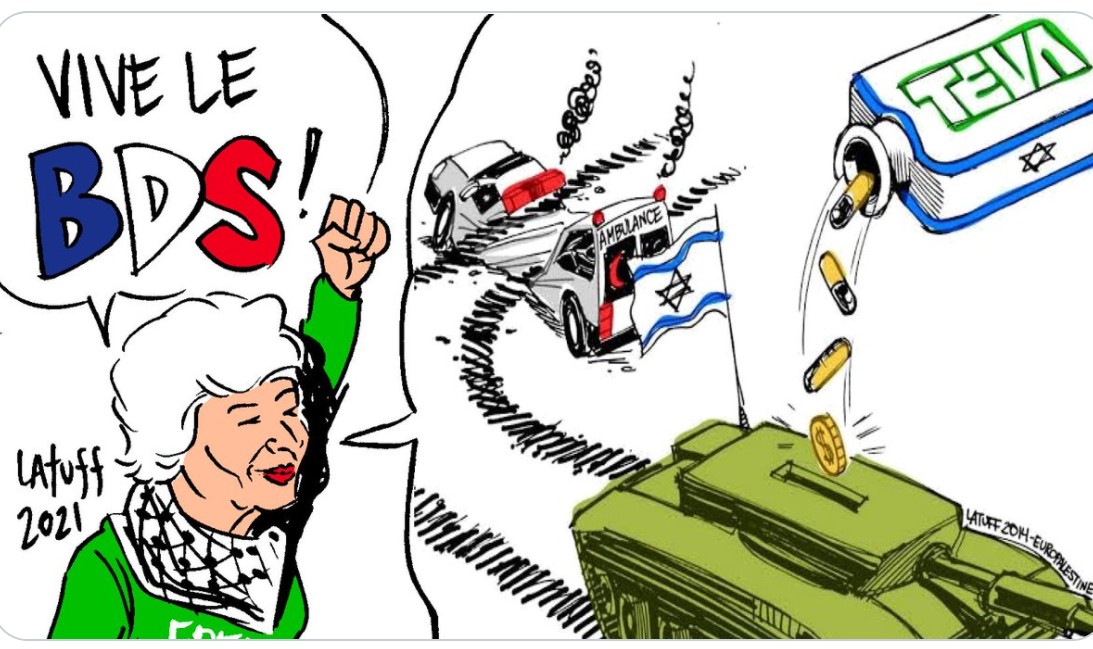 The FBI is going to be after VT again for publishing this….

French activist Olivia Zemor has gone on trial in Lyon after making an online appeal in 2016 for a boycott of Israeli pharmaceutical giant Teva company.

She appeared in court on March 16 over publishing a call by Collectif Palestine 69 on EuroPalestine website, urging readers to boycott Teva, the largest Israeli pharmaceutical corporation by market value.

Zemor, an active advocate of the Boycott, Divestment, and Sanctions (BDS) movement against Israel, was sued for “defamation” by Teva after she accused the company of complicity in apartheid and occupation.

In comments to French newspaper Le Courrier de l’Atlas, she said, “Through its financial contribution to Israel, this pharmaceutical giant contributes to the financing of military operations in Gaza and to the development of colonization in the West Bank and East Jerusalem, in defiance of the rights of the Palestinian people and of international resolutions.”

Therefore, she added, it is necessary to call for the company’s boycott.

15 March, French embassy, London, @IJAN_Network joined @FAApartheid to hand in a letter to the ambassador in defence of Olivia Zémor president of @Europalestine1 facing charges in Lyon court tomorrow for publishing a call to #BoycottTEVA. Solidarity with Olivia! Free Palestine! pic.twitter.com/0aWjXRMzCQ

However, Frédéric Jeannin, lawyer for the pharmaceutical company, denied the accusation, claiming that “Teva is not involved in a geopolitical, ethnic or religious conflict, and these actions hamper its economic activity.”

Activists from Australian Friends of Palestine rallied outside the French Consulate in Adelaide in support of Olivia Zémor, a French activist and critic of Israeli abuses against Palestinians, who is facing charges for calling to boycott the Israeli pharmaceutical company Teva. pic.twitter.com/4rnPl9j1w8

On the day of Zemor’s trial, activists gathered outside the courtroom to condemn the French government’s attempts to silence criticism of Israel and those who speak out against the oppression of Palestinians.

They argue that the European Court of Human Rights last year affirmed the right to boycott Israel and that this ruling invalidates the French prosecution of Zemor, who is the president of the EuroPalestine solidarity group.

Activists from Australian Friends of Palestine rallied outside the French Consulate in Adelaide in support of Olivia Zémor, a French activist and critic of Israeli abuses against Palestinians, who is facing charges for calling to boycott the Israeli pharmaceutical company Teva. pic.twitter.com/guBiHsUeX0

French Justice Minister Eric Dupond-Moretti is accused of “a blatant violation of the decision” by distributing a circular to prosecutors urging them to take action against activists supporting the BDS campaign.

Teva, one of the world’s largest manufacturers of generic drugs, provides millions of pounds in tax revenue to the Israeli regime and its military.

The company is accused of “joining hands with the French state to aggressively seek to shut down and silence international voices of conscience for exposing corporate complicity and profiteering from the Israeli occupation regime.”

People have been asked to show solidarity with Zemor by writing to French embassies and consulates and holding protests outside them.

Palestinians have for decades called on civil campaigns against Israel, organized under the BDS umbrella.

The BDS movement was initiated in 2005 by over 170 Palestinian civil society organizations, unions, as well as cultural and rights groups, including all major political parties, trade and academic unions that were pushing for “various forms of boycott against Israel until it meets its obligations under international law.”

Thousands of volunteers worldwide have since then joined the nonviolent campaign, which calls for people and groups across the world to cut economic, cultural and academic ties to Tel Aviv, to help promote the Palestinian cause.

Israel claims that the movement is a strategic threat and accuses it of anti-Semitism – a claim that activists firmly deny, calling it an attempt to discredit them.

The BDS, which adheres to peaceful resistance, intends to exert pressure on the Israeli regime to adhere to international law and human rights by lobbying various states, institutions and individuals to understand its oppression of Palestinians and take action as a result.