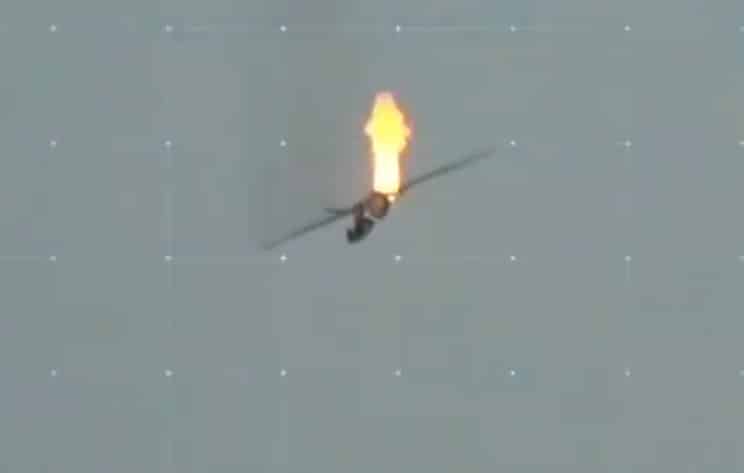 This grab taken from a video released by the media bureau of Yemen’s Houthi Ansarullah movement on March 24, 2021, shows the interception of a sophisticated US-built MQ-9 Reaper drone over Yemen’s central province of Ma’rib.

Yemen has released footage of the moment when Yemeni army forces, supported by allied fighters from Popular Committees, intercept and target a sophisticated US-made MQ-9 Reaper drone as it is flying over the country’s central province of Ma’rib.

The media bureau of Yemen’s popular Houthi Ansarullah movement released on Wednesday the video of Yemeni air defense forces and their allies shooting down the unmanned aerial vehicle with a surface-to-air missile over the Sirwah district the previous day.

Over the past few weeks, Ma’rib has been the scene of large-scale operations by Yemeni troops and allied Popular Committees fighters, who are pushing against Saudi-sponsored militants loyal to Yemen’s former president, Abd Rabbuh Mansur Hadi.

Sultan al-Sama’i, a member of Yemen’s Supreme Political Council, said on Saturday that Yemeni army troops and Popular Committees fighters will liberate the neighboring provinces of Shabwah and Hadhramaut after establishing full control over Ma’rib.

The US military occasionally launches drone and air strikes against purported positions of militants affiliated with Al-Qaeda in the Arabian Peninsula (AQAP) terror group.

Yemeni forces destroy an armed drone of the Saudi-led coalition in the skies over Yemen’s western province of Hudaydah.

The turboprop-powered, multi-mission MQ-9 Reaper armed drone reportedly can fly for more than 27 hours between refueling at speeds to 240 knots at altitudes to 50,000 feet.

The medium-endurance unmanned aerial vehicle can also carry payloads as heavy as 3,850 pounds, including 3,000 pounds of external stores like Hellfire missiles.