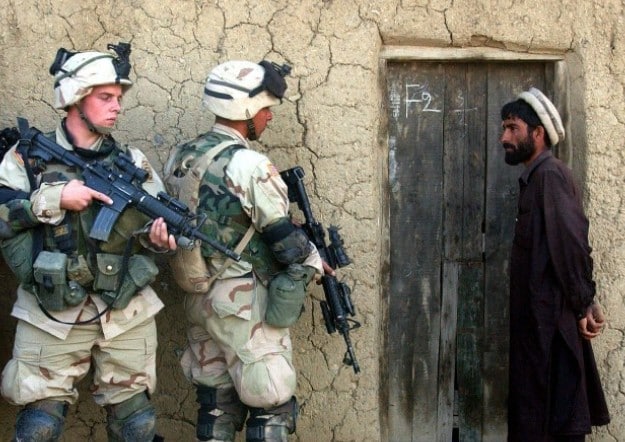 As the May 1 deadline on withdrawing troops from Afghanistan approaches, Washington’s foreign-policy elite is once again deluding itself, this time to think that if U.S. troops are kept in Afghanistan a bit longer, a deeper civil war can be evaded, the Taliban can be kept in check and the gains Afghans have achieved in urban areas can be protected.

The reality is, whether or not Biden withdraws or not, Afghanistan is likely to spiral into more violence. The only variable Biden actually controls is whether American soldiers will be the target of that violence or be safe at home with their families.

My colleague Adam Weinstein and I write about this in Time Magazine today. Your thoughts are welcome.

BY TRITA PARSI AND ADAM WEINSTEIN

Secretary of Defense Lloyd Austin’s impromptu visit to Kabul over the weekend where he claimed the United States seeks a “responsible end” to the war followed Secretary of State Tony Blinken’s letter to Afghan President Ashraf Ghani and a leaked U.S. peace plan.

These moves have made one thing clear: Washington’s foreign-policy elite is once again deluding itself, this time to think that if U.S. troops are kept in Afghanistan a bit longer, a deeper civil war can be evaded, the Taliban can be kept in check and the gains Afghans have achieved in urban areas can be protected.

The reality is, whether or not President Biden withdraws all U.S. forces by May 1 in accordance with a U.S.-Taliban agreement, something he describes as “tough,” Afghanistan is likely to spiral into more violence. President Biden must accept the logical conclusion of this reality: The only variable he can control is whether American soldiers will be the target of that violence or be safe at home with their families.

The grim reality is there is no “responsible” alternative to withdrawing from Afghanistan. A recent report by a congressionally mandated Afghanistan Study Group proposes that a U.S. withdrawal should be conditions-based.

That is, it should occur only after violence plummets, intra-Afghan negotiations make significant progress and the Taliban cut all ties with al-Qaeda. That may sound good on paper, but a unilateral decision to blow past the May withdrawal deadline will destroy an already beleaguered peace process and Washington will find itself drawn back into a violent counterinsurgency.

It will annul the U.S.-Taliban agreement, which, despite its flaws and failure to bring peace to Afghans, led to a year without a single U.S. combat death, and leave President Biden to once again await American caskets at Dover Air Force Base.

The war will go on endlessly, and as such, the choice will not be one of violence versus peace in Afghanistan, but which Afghans experience the most violence.
Staying in Afghanistan may temporarily stave off the Taliban from capturing Afghanistan’s largest cities, but violence will surge in the countryside where the majority of Afghans live.

President Biden will invariably be asked to send additional troops to Afghanistan or compensate with airstrikes as the Taliban amps up its insurgency even more. Rural Afghans will find themselves stuck in the crossfire as a scorned Taliban squares off against a reanimated U.S.-led counterinsurgency backed by deafening airpower. The war will go on endlessly, and as such, the choice will not be one of violence versus peace in Afghanistan, but which Afghans experience the most violence.

Another option the Biden team is considering is to use international pressure to persuade the Taliban to accept a one-time extension of the U.S. troop withdrawal deadline by at least six months to achieve some semblance of a peace deal. Blinken’s letter suggests that aspects of this option are already under way and he proposed a meeting in Turkey between the Taliban and various representatives of the Afghan government to push toward a peace deal. Turkey confirmed it will host this summit in April.

This path is offered as an alternative to retaining a small counterterrorism presence that will inevitably fall prey to mission creep. Proponents of this plan convincingly argue that significant progress toward a political settlement is unlikely to occur prior to May 1. The Biden Administration appears to be going a step further by proposing an interim government as part of its leaked peace plan.

This is a high-stakes, high-reward plan. If it succeeds, then it offers the possibility of a full U.S. withdrawal from a more stable Afghanistan, a reliable counterterrorism partner in Kabul and the minimal conditions necessary for foreign aid. But that’s a very big “if” and analysts warn it will likely fail.

In fact, President Ghani already signaled his rejection of the U.S. peace plan according to reports that he will announce his own, including new elections conditioned on a ceasefire that the Taliban is likely to reject.

The Taliban is adamantly opposed to delaying the withdrawal of foreign troops. Any chance of altering their position will require regional drivers of the war like Pakistan to use leverage against the Taliban that may not exist and that Islamabad is unlikely to deploy even if it does.

Pakistan recently joined Russia, China and the United States in a joint statement urging the Taliban to forego a spring offensive, but it’s unclear whether this public pressure will translate into action. Iran’s cooperation will also be needed at a time when formal channels of communication have been dormant for four years. And Washington and Kabul will likely have to provide their own concessions.

An acquiescence by the Taliban to an extension will only take things back to square one. The violence, corruption, cronyism and distrust that plague Afghan negotiations today will still exist in six months. The Biden Administration will then find itself even more invested in an intractable and volatile conflict, having forfeited a clear pathway out in May.

These catch-22s lead us to the only viable path forward, which is to accept that the U.S. military cannot dictate the end state in Afghanistan. The longer the Biden Administration delays in making the inevitable decision to withdraw, the more precarious a position it will place U.S. troops, NATO allies and, ultimately, the future of Afghanistan.

President Biden has made his priorities in Afghanistan clear in the recent past. When asked in February 2020 if he felt he would bear responsibility if the Taliban retook control of Afghanistan, he replied, “The responsibility I have is to protect America’s national self-interest and not put our women and men in harm’s way to try to solve every single problem in the world by use of force.”

Pulling U.S. troops out by May will fulfill this duty by removing young Americans from the crosshairs of the last 20 years of war. True, without U.S. troops, the Taliban may have little incentive to participate meaningfully in negotiations with the Afghan government and a civil war reminiscent of the 1990s may very well ensue.

Many young Afghans may feel abandoned by the United States. But intra-Afghan negotiations have made little progress even with the presence of foreign troops and staying will only tie Washington to equally violent outcomes that it cannot control. Just last week, a helicopter carrying Afghan special forces members was shot down by a local militia purportedly raised to protect the local community from groups like the Taliban.

When it comes to ending the violence, Biden has a better chance of achieving sustainable progress through regional diplomacy than through open-ended war, even if things get worse before they get better.

We don’t envy Biden’s dilemma. His worry about being blamed for post-withdrawal violence is understandable. That images of gleeful Taliban fighters flashing across American television screens will cost him politically is undeniable. But delaying a withdrawal will not alter this reality, it will only compound it.

Instead, Biden should worry about the political cost of squandering the best opportunity yet to end America’s longest war. He should continue to facilitate diplomacy but without using U.S. troops as collateral.

If Biden chooses to stay, every dead soldier, every family broken and every opportunity wasted to build back better at home will rest on his shoulders and taint his legacy. America’s endless war in Afghanistan will become Biden’s war.