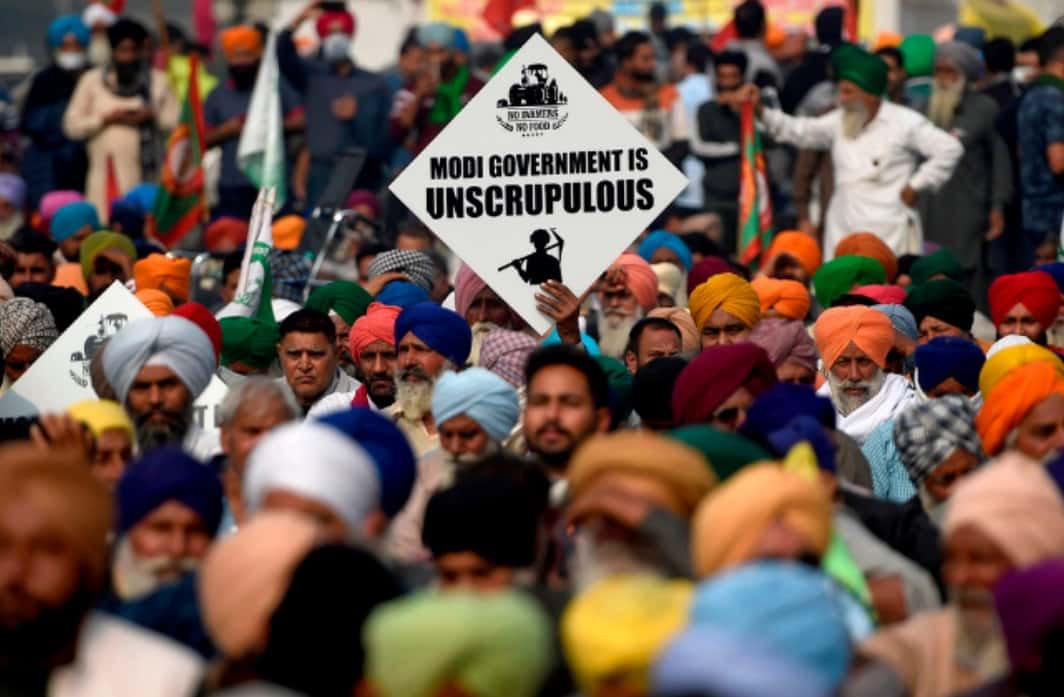 Farmers’ unions launched a nationwide shutdown and strike amid large-scale protests, while the Indian government blocked the Internet access in several districts of a state bordering India’s capital, following violent clashes between police and farmers.

On November 26, last year, over 12 million farmers from the northern states of Punjab and Haryana, and neighbouring New Delhi set up protest camps in and around New Delhi to force the government to repeal laws which they say put them at the mercy of private companies and destroy their livelihoods.

During Indian Republic Day on January 26, 2021, farmers’ tractor rally turned violent, with protesters and police clashing with each other, while some protesters were spotted wielding swords. Instead of the Indian tricolour flag, the farmers hoisted the banner Nishan Sahib on the Red Fort complex in the capital—a flag of the Khalistan movement for an independent state for Sikhs in Punjab.

Despite the suicide of five farmers and hunger strike, the deadlock between farmers and Centre has been continuing with no side willing to concede ground.

The government argued that the new laws will give freedom to farmers to sell their produce outside regulated markets and enter into contracts with buyers at a pre-agreed price.

Farmers’ associations’ stand is that the legislation does not guarantee the acquisition of farm produce through state-run organizations which guarantee a minimum support price, thus leaving them at the mercy of corporations which are now expected to enter the country’s troubled farming sector.

The opposition parties, including many non-BJP-ruled state governments backed the demonstrations and have called the laws anti-farmer and pro-corporation, while insisting on the central government to accept the farmers’ demand to roll them back.

Notably, the Shaheen Bagh protest by Muslim women was dealt by incentives of talks and coercion through state machinery, taking help from Indian courts, which are already compromised by the extremist outfit RSS.

In this regard, India Today wrote: “Protest over the three farm bills at Delhi borders has brought back the memory of the Shaheen Bagh agitation over the Citizenship Amendment Act (CAA)… The protesters squatting at Shaheen Bagh in Delhi demanding repeal of the CAA alleged that the government passed the law showing acute high-handedness…In case of the farmers’ protest over the farm bills, the protesters accuse the government of the same high-handedness”.

Some so-called top analysts like Shekhar Gupta are calling Modi not to budge from his reformist policies, after all what can 2 % of Sikh population in 1300 million strong India do to Modi. They actually projected Modi’s macho image by quoting how he has confronted China and Pakistan in Ladakh and Balakot.

Indian media which projects stance of Modi’s flawed policies by the stalwart of the biased parties such as RSS and BJP tried to link Pakistan and China with Sikh farmers with a view to dent the cause of farmers’ movement.

A former assistant director of the Finance Commission of India, Ritesh Kumaar wrote in an article, “Narendar Modi has left India’s economy a shattered mess…Managing the economy hasn’t been Modi’s only fumble…Modi approved a disastrous banknote demonetization scheme aimed at eradicating the black market economy and clamping down on tax evasion. In addition to the chaos it created, the scheme ruined the prospects of hundreds of thousands of farmers and small to medium enterprise owners”.

Nevertheless, a number of Indian celebrities-Bollywood stars have, also, supported the protests of farmers.

The farmers’ movement has found resonance on social media, and among the influential Sikh community in Punjab and overseas.

In the recent past, thousands of people mostly Sikhs protested in favour of the farmers outside the Indian embassy in London and some other countries.

Several US lawmakers have voiced their support for the ongoing protests.

In this respect, Congressman Doug LaMalfa said: “I stand in solidarity with the Punjabi farmers in India protesting for their livelihoods and protection from misguided, manipulative government regulations.”

Canadian Prime Minister Justin Trudeau reiterated his support of Indian farmers, “calling the police crackdown on the farmers protests concerning”, elaborating: “they should be allowed to stage peaceful protests…Indian ministry of external affairs shamelessly reacted to a very basic question of human rights.”

A group of 36 cross-party parliamentarians in UK have written to British foreign secretary, asking him to make representations with his Indian counterpart about the impact on British Punjabis, affected by the demonstrations of farmers against new agriculture reforms.

Recently, Indian media reported that in various districts of Haryana state, many farmers have destroyed wheat crops in protest against the agriculture laws.

As Modi’s regime has not abrogated the agricultural laws, the farmers clarify that their commitment to continue the protests remains unshaken.