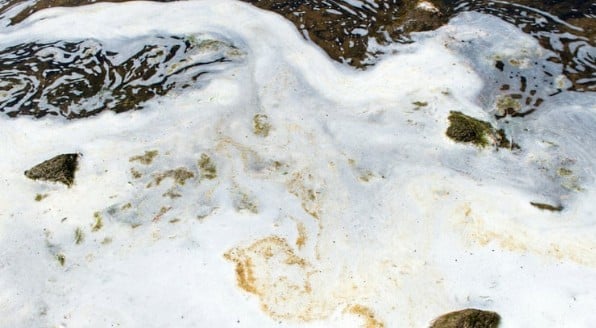 Guardian: One of the most enduring, indestructible toxic chemicals known to man – Aqueous Film Forming Foam (AFFF), which is a PFAS “forever chemical” – is being secretly incinerated next to disadvantaged communities in the United States. The people behind this crackpot operation? It’s none other than the US military.

As new data published by Bennington College this week documents, the US military ordered the clandestine burning of over 20m pounds of AFFF and AFFF waste between 2016-2020. That’s despite the fact that there is no evidence that incineration actually destroys these synthetic chemicals. In fact, there is good reason to believe that burning AFFF simply emits these toxins into the air and onto nearby communities, farms, and waterways. The Pentagon is effectively conducting a toxic experiment and has enrolled the health of millions of Americans as unwitting test subjects.

https://t.co/c1ckzxUspX
Oh, THEY KNOW that BURNING AFFF, WHICH IS LOADED WITH PFAS, could be generating toxic plumes and impacting neighborhoods but somehow they only ban it in "certain cities"?

AFFF was invented and popularized by the US Armed Forces. Introduced during the Vietnam War to combat petroleum fires on naval ships and air strips, AFFF was the whizz kid of chemical engineering that forged a synthetic molecular bond stronger than anything known in nature. Once manufactured, this carbon-fluorine bond is virtually indestructible. Refusing to become fuel, this herculean bond overpowers and tames even the most incendiary infernos.

Synthetic carbon-fluorine chemistry, now classified as per- and poly- fluorinated compounds (PFAS), are coming into focus today as fuelling an unprecedented environmental crisis. After the briefest moment of practical utility, PFAS compounds come to haunt life with roving mobility, torpid toxicity, and a monstrous immortality. As we now know, exposure to trace amounts of these “forever chemicals” is strongly linked to a host of cancers, developmental disorders, immune dysfunction, and infertility. Exposure has also been linked to aggravated Covid-19 infections and weakened vaccine efficacy.  read more…