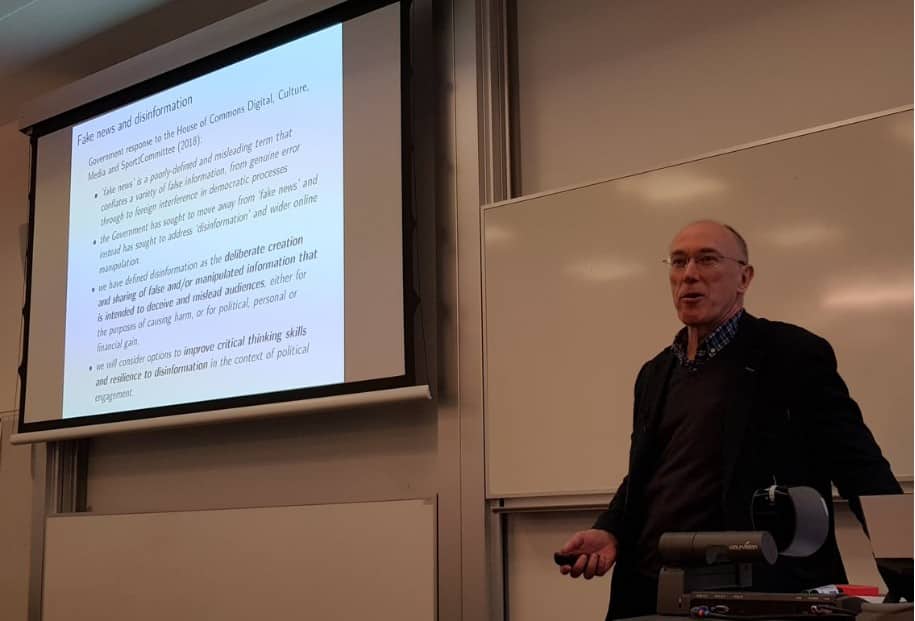 RT: A UK professor investigating a Western-funded group gathering evidence against Syrian officials was contacted by his target’s staff posing as a Russian agent. The communications were framed as potentially traitorous by the media.

The BBC wrote a lengthy piece blasting Edinburgh University Professor Paul McKeigue, a member of a group of academics called the Working Group on Syria, Propaganda and Media (WGSPM). The group seeks to expose Western efforts to shield from public scrutiny a long-term campaign to destabilize and topple the Syrian government.

It was just a matter of time before Paul McKeigue and David Miller were targeted and discredited for asking too many questions about the Syrian Civil War, Salisbury attacks, and other issues close to the security services.

A sad state of affairs.https://t.co/CUWLcgxdqy

For three months, McKeigue was in contact about CIJA with a person calling themselves ‘Ivan’ and hinting that they were working for a well-informed organization with headquarters in Moscow. The fake Russian intelligence officer was actually people working for CIJA and its founder, William Wiley, the BBC reported.

This was Paul Mckeigue giving a lecture on disinformation at Edinburgh University. Days of freedom of speech are clearly over.https://t.co/rl5nvDnZyG

Wiley, who McKeigue suspected of being a CIA agent, says he ran the sting operation to learn what McKeigue knew about his organization. He says he was worried that a former employee would leak to the WGSPM.

“This wasn’t some kind of revenge operation. It was driven entirely by concerns for our security, and ultimately our findings justified those concerns,” he told the BBC.

“Aside from protecting our sources, witnesses and our personnel, we need to protect our reputation. Because if our reputation is dragged through the mud, our funding will stop. And if the funding stops that will have a highly negative impact on justice.”

The ‘not-revenge’ expose goes to great lengths to paint McKeigue as a conspiracy theorist with a grudge against the ‘justice-seekers’ from the CIJA and no second thoughts about hurting people. If Ivan were indeed a Russian agent, who knows what harm would befall people who McKeigue identified as working on the West’s behalf, the BBC suggested, implying that Russian intelligence needed this type of direction from the professor.

Interestingly, one of the individuals discussed in the communications in this way was BBC journalist Chloe Hadjimatheou, the author of the expose. One can only compliment her for being held in such high regard by her employer that it doesn’t doubt her ability to cover in a balanced and fair manner a man who called her “a dim-witted person who has been flattered into taking on something beyond her competence,” according to her report.

The sting was described in fewer details but along the same lines by the Times. It cited a former UK military officer whose name popped up in the communications, as accusing McKeigue of “treacherous activity.” The newspaper previously called the WGSPM “apologists for [Syrian President Bashar] Assad.”

Despite its length, the BBC story does miss some details that would provide crucial context about the conflict between McKeigue and Wiley and their respective groups. For example, the BBC didn’t mention that the funding Wiley was worried about comes from Western governments, including the US, UK, Canada, Germany, Denmark, the Netherlands, Norway, and the EU.

The BBC only briefly mentions the alleged chemical weapons incident in Douma in 2018 to inform the readers that McKeigue said, “the Syrian regime might not have been responsible for” it, contrary to what “inspectors for the Organisation for the Prohibition of Chemical Weapons (OPCW) concluded.”

At least some OPCW inspectors who were at the scene of the incident actually suggested otherwise, but their opinions were allegedly silenced by the watchdog and didn’t make it into its final report. McKeigue’s WGSPM happens to be the publisher of a leaked engineering assessment by OPCW inspector Ian Henderson, which said evidence his team found in Douma pointed to a staging of the purported attack.

ALSO ON RT.COMOPCW chief must ‘find the courage to address’ Douma coverup allegations, says group including 5 senior ex-officials of watchdog

More whistleblower testimonies and documents have since emerged to back the allegation that the OPCW wrote its final report to justify the missile attacks which the US, UK, and France carried out in retaliation for the purported Syrian Army atrocity. The watchdog responded by describing the whistleblowers as rogue elements and refused to conduct an open review of the scientific evidence underlying its conclusions about the incident.

McKeigue himself acknowledged that Wiley ran “a clever deception operation” against him and suggested it was meant to distract him from looking into alleged financial irregularities in CIJA and Wiley’s businesses. The CIJA founder baited him by citing his alleged CIA affiliations, which may or may not be real, the professor said.

“The people on the other end of this sting managed to get me to reveal information provided by others that was not intended to be shared, along with other information that may have been embellished. This was a failure on my part for which I accept responsibility and have apologized to those concerned,” McKeigue wrote in a personal statement.

Commenting on his willingness to talk to a purported Russian spy, McKeigue said he had no access to British state secrets, so the possible affiliation wasn’t of much concern. “I cultivate contacts with all sorts of people who have relevant information, including anonymous sources and some identified sources whose activities I do not endorse,” he explained.

The WGSPM responded to the publications by saying they exemplified “smear campaigns and hatchet journalism” waged in the West to silence dissent on the Syrian war.