by Salman Rafi Sheikh, …with New Eastern Outlook, …and the Institute of Oriental Studies of the Russian Academy of Sciences, a research institution for the study of the countries and cultures of Asia and North Africa.

[ Editor’s Note: Is this Biden reinventing Trump’s unipolar power dominance via a two step Biden unipolar power move in Asia with allies in tow, so they are available for cannon fodder use when deemed necessary to keep US trade fluctuations down?

What is important in this Biden plan story is to take a broad overview. By pulling allies into a coalition, he is positioning them for bullet magnets in case of hostilities. So one has to ask, why would they want this exposure when they can just be trade friendly countries with China and sit on the sidelines during a war?

China has no real invasion capability at this point, and has been spending its military money on a defensive navy as protection against the massive US navy firepower. It is also building a strong retaliatory defense as a first strike deterrent. If you want to talk about a threat, that is an undeniable one.

Within this context, to call China’s Navy expansion a threat is just hoaxing the American people to support an aggressive policy by the US to move into a first strike decapitation capability to threaten China.

As for why our own government would want to create a Neo Cold war against someone, the answer is the usual one. The uber wealth interests, who have their hooks deep inside our government, can see themselves making a shit load of military funding money ‘confronting China’, and also Russia, if the peacetime economy is looking dim for them.

NATO is doing a similar move pushing up to the Russian border via Ukraine. Then we have the US wanting the EU to be more dependent on US energy, not for their own security, but so we can have that advantage over them in a time of need.

And, there is the not discussed item that for Biden’s much hyped infrastructure spending to create high paying jobs here, US products based on such will be much less marketable overseas.

Biden needs a cover to always have sanctions put on China so Americans can’t buy Chinese, even if it is better, because sanctions run up the costs.

Economists have always warned that such contrived market moves fail in the long run.

But for countries with a huge military and unlimited borrowing power, which the super rich love, a slow peacetime trade market can always be replaced by a profitable war time market in a jiffy. Think false flag. You just have to press the right buttons… Jim W. Dean ] 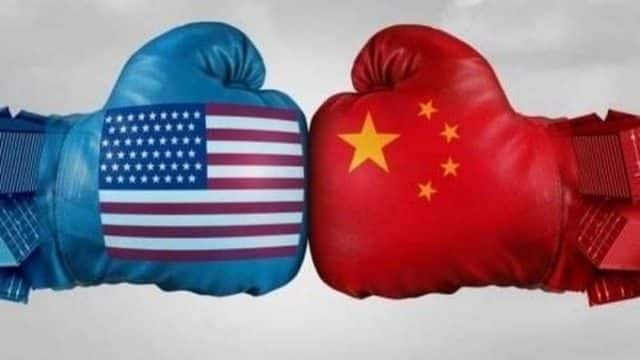 While the recently held QUAD summit-meeting did not mention China directly, there is little gainsaying that the basic thrust of the group is against China.

Although there are internal disagreements on whether to tackle China through military means or otherwise, or whether to keep this grouping strictly anti-China or not, the Biden administration has no doubts.

For them, the QUAD is a ‘Asia Pivot 2.0.’ and that the very survival of the US in Asia & the Pacific depends on selling a ‘China threat’ and subsequently placing itself as the primary bulwark against it; hence, the hurriedly done arrangements to hold QUAD’s first ever summit level meeting.

In other words, at the heart of Biden’s “China Strategy” is the imperative of rebuilding ties with allies in Asia & the Pacific, especially those frustrated by Trump’s policies, and then assembling a grand anti-China coalition.

Therefore, while the QUAD summit did not mention China as the rival, the so-called “The Spirit of the QUAD” is more than categorically specific about establishing a US led regime of rules governing Asia & the Pacific.

“The spirit” is about making the QUAD “strive for a region that is free, open, inclusive, healthy, anchored by democratic values, and unconstrained by coercion.” As such, while the summit did not mention China, it still addressed China directly. Indeed, this was more about making China “hear.”

“the more China hears not just our opprobrium, but a course of opprobrium from around the world the better the chance that we’ll get some changes. We have a number of steps we have taken, or can take, going forward to include for those directly responsible for acts of genocide, gross human rights violations – sanctions, visa restrictions, etc.”

Again, while the QUAD summit was not overtly anti-China, the Biden administration’s follow up visits to Asia & the Pacific are very much focused on building and cementing anti-China alliance.

For instance, the US Defense Secretary Lloyd Austin said on Saturday March 13 that he was traveling to Asia to boost military cooperation with American allies and foster “credible deterrence” against China, adding that “China is our pacing threat” and that “Our goal is to make sure that we have the capabilities and the operational plans and concepts to be able to offer credible deterrence to China or anybody else who would want to take on the US”

Criticising the Trump administration’s ambivalent policies that concerned themselves with ‘trade war’ and ‘deal making’, Austin said while the US competitive edge has eroded, “We still maintain the edge and we’re going to increase the edge going forward.”

The key to increasing the edge is through alliances. It is the alliances that, as Austin emphasised, “give us a lot more capability and so one of the big things the Secretary of State and I want to do, is begin to strengthen those alliances — great alliances, great partnerships to begin with.” This will be the key to furthering US interests in Asia & the Pacific against China.

Accordingly, Austin’s visits to Japan and South Korea are most likely to focus on repairing the damaged done to their ties by the Trump administration.

While Japanese officials are sure to seek assurances from Austin that the US military would come to Japan’s aid in the event of a conflict with China over the Senkaku Islands, his time in Seoul is expected to be consumed with the question of whether to resume regular large-scale military exercises with South Korea, which Trump had abruptly cancelled.

Already, the two countries have reached a cost-sharing agreement for stationing American troops in South Korea, a presence that Trump had also threatened to end.

Austin’s full-scale visit to Asia & the Pacific also includes India, another QUAD member and a country at its lowest point in relations with China in decades after deadly clashes last year. Austin’s visit, therefore, will be particularly focused on utilizing the existing tensions between India & China to the US’ advantage.

The US, as it stands, cannot let these opportunities un-utilized; for, such opportunities allow them [the US ] to inject themselves in conflict zones in ways that, instead of de-escalating tensions, serve US interests first and foremost. If the US needs India as an ally against China, it needs to convince the Modi regime that India’s survival against China demands partnership with the US.

Again, the fact that the Trump administration stood virtually aloof in the last year India-China border skirmishes did a great deal of damage to India’s belief about the extent to which it could rely on the US. Austin’s mission will be, first and foremost, focused on rebuilding India’s belief and assuring the Indian government of the inevitability of the US support for their survival against China.

There is little gainsaying that the core focus of the Biden administration’s foreign policy is China. This is evident not only from the first ever summit level meeting of the QUAD, but also from Lloyd Austin’s first ever overseas mission as the Pentagon Chief.

What it shows is that the Biden administration, which is still less than two months into the presidency, is in no hurry to change of the course of tense relations with Chain set by the Trump administration.

In fact, the Biden administration is not only building on the same tensions, but is also utilizing its relatively more “responsible”, more “democratic” and more “stable and predictable” outlook as compared to the previous administration to woo their somewhat estranged allies into a sort of “global coalition” that Mike Pompeo had sought, and failed, to build and lead.