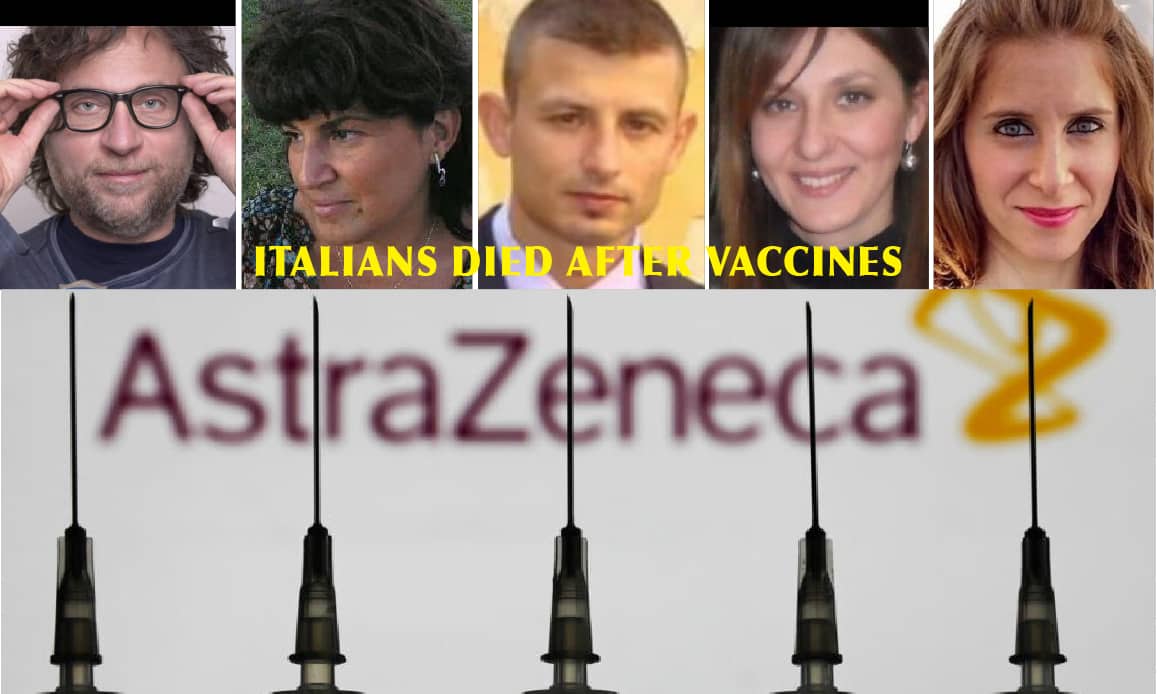 From now on, anyone who will have serious or fatal physical damage from taking the AstraZeneca vaccine will find it hard to sue the Cambridge multinational (born from the merger of the Swedish Astra with the British Zeneca) because the company has changed the name of its serum and also in the leaflet (never was a name more appropriate for the information leaflet on drugs …) he entered the risks of thrombosis which led to the precautionary suspension of the administration in 12 countries of the European Union and, as of yesterday, also in Canada, for under 55yo.

At the same time a twist arrived from Germany, among the first to block the administration last March 16 after the cases of mysterious blood clots then restarted after the o of the EMA / European Medcicines Agency).

On Tuesday, March 30, 2021, Berlin changed the rules for administering the AstraZeneca coronavirus vaccine following new cases of circulatory problems (thrombosis) found in some newly vaccinated people. From Wednesday, the AstraZeneca vaccine will only be given to people over 60, while people under the age of 60 will only be able to get the vaccine by taking the risk and after a careful examination of their clinical situation and the risks associated with the vaccine.

The decision was made by the German government and health ministers of all federal states after the Standing Commission for Vaccines (STIKO) changed its recommendations on the use of the vaccine. In turn, the Commission released the new recommendations after the Paul-Ehrlich-Institut, the government agency that deals with the safety of medicines, highlighted new cases of a rare form of thrombosis in people who had received the vaccine. AstraZeneca. The new cases of thrombosis, Spiegel wrote, concern 31 of the approximately 2.7 million people in Germany who received the AstraZeneca vaccine, and most of them occurred in people under the age of 60.

This happens after the NIAID (the American National Institute for Infectious Diseases) had asked the London company for clarification in reference to obsolete data provided for the request for health authorizations necessary for marketing in the USA.

Many Thrombosis after Vaccines: 3 Carabinieri Soldier dead. But AstraZeneca & Italy Business Must Go On. EMA said…

«AstraZeneca’s anti-Covid vaccine has changed its name to ‘Vaxzevria’. The name change was approved by EMA on 25 March following a request from the Anglo-Swedish pharmaceutical group, we read on the website of the European drug agency, in which the new leaflet of the drug. Among the side effects, the “very rare” cases of thrombosis are added». In Italy and EU happened to young people.

This was written by the Italian agency ANSA, one of the main mainstream media, which wisely ignored the dramatic events of young teachers and soldiers in perfect health who died after vaccination with the antidote AstraZeneca, reported by many national media, not to upset the population in connection with a vaccine based on the chimpanzee vector Adenovirus, tested for the first time in medical history against a human virus. Right in Italy!

This media line appears to be really oriented in order to avoid repercussions for the Italian manufacturer of the vector Adenovirus, the Advent srl of the IRBM Park Science in Pomezia (Rome) financed for years before the pandemic by the governor of Lazio Nicola Zingaretti, as if it possessed skills of clairvoyant like Bill Gates who announced the Coronavirus outbreak in 2015 while funding the dangerous SARS virus experiments at the Wuhan Institute of Virology.

The same prophecy was also made in 2018 by Avril Haines, former deputy director of US CIA counter-intelligence during the Obama administration, expert in bio -weapons, and promoted to National Director of US Intelligence by the new president Joseph Biden, well funded in the election campaign by Pfizer, who is enriching himself on the vaccine developed with the active ingredient of BioNTech, in which Gates is a great investor, also megadonor of the American Democratic Party.

It is therefore obvious that theItalian Minister of Health Roberto Speranza, who together with the AIFA (Italian Medicines Agency) immediately authorized the resumption of the administration of the AstraZeneca vaccine after the hasty ok of the EMA (European Medicines Agency), is in perfect lin  with the Italian PD, the majority party of Mario Draghi’s new government, as well as center-right governors such as the President of the Piedmont Region, Alberto Cirio, who after promptly suspending the use of the AstraZeneca serum, rejoiced as soon as the pharmaceutical authorities they have restored use.

In other countries of the world, however, the same hasty and adventurous initiative is not shared. The Russia Today network reports this with great evidence. “Canada has suspended its use of AstraZeneca’s coronavirus vaccine for those younger than 55, pointing to safety concerns following a number of reports of serious blood clotting among recipients in Europe” writes RT.

The move comes after a recommendation from Canada’s National Advisory Committee on Immunization on Monday, which called for a pause to buy time to evaluate the safety concerns, namely over a rare blood clotting condition known as vaccine-induced prothrombotic immune thrombocytopenia, or VIPIT.

“There is substantial uncertainty about the benefit of providing AstraZeneca Covid-19 vaccines to adults under 55 given the potential risks associated with VIPIT,” said Shelley Deeks, who serves as vice-chair of the National Advisory Committee.

The recommendation was prompted by new data out of Europe suggesting the risk of blood clotting in AstraZeneca recipients could be as high as one in 100,000, far above the one in 1 million figure previously estimated by researchers, Deeks said. She added that most of the European patients experiencing clotting were women under the age of 55, and that the fatality rate among those who develop blood clots is as high as 40%.

Because the AstraZeneca jab is not expected to make up a large proportion of Canada’s overall vaccine supply, however, the Committee said the country’s immunization drive “will not be significantly delayed” by the pause.

The head of Manitoba’s provincial vaccine taskforce, Joss Reimer, said that while “we don’t know yet exactly how common this side effect is,” it is better to err on the side of caution.

“While we still believe the benefits for all ages outweigh the risks I’m not comfortable with ‘probably’. I want to see more data coming out of Europe so I know exactly what this risk-benefit analysis is,” Reimer said.

More than a dozen countries across Europe have temporarily suspended their rollout of the AstraZeneca vaccine as reports of blood clots cropped up, though several have since resumed after EU health authorities declared the vaccine safe and not related to the clotting issues, which in some cases were fatal.

Despite the all-clear given by European regulators, however, a research team from Germany’s Greifswald University Hospital recently claimed to have found a link between the vaccine and blood clots. The researchers said an immune response to the jab could lead to the formation of antibodies that are normally stimulated when an organism needs to heal a wound through blood coagulation, potentially creating blood clots, particularly in the brain.

But the decision of Canada and Germany follows those of Norway which, like Denmark and other Scandinavian countries, had maintained the suspension despite the positive opinion of the EMA.

The Norwegian government has confirmed media reports that it will continue to suspend the use of the heavily criticized AstraZeneca Covid-19 vaccine, and has promised a decision will be made in three weeks.

“We have decided to continue the pause and make a new decision by April 15,” said Camilla Stoltenberg, Director General of the Norwegian Institute of Public Health, on Friday, as she addressed speculation around the AstraZeneca vaccine.

“We have started several processes to map out whether there is a causality and to have a better basis to establish the real risk and a cost-benefit analysis for different age groups. To get more knowledge, it is necessary to have more time,” the health service chief told broadcaster NRK.

The decision comes a day after the Danish health authority said the country will extend the temporary suspension of the AstraZeneca Covid vaccine for another three weeks, as it cannot rule out a connection between the serum and blood clots.

With the change of name from AZD1222 to the trade name Vaxzevria, the multinational vaccine company, partner of Gates in the COVAX project in the Big Pharma cartel, has removed a big problem: it has admitted the “very rare” risk of thrombosis. Therefore, making those who decide to accept the inoculation of their vaccine aware. As happened to the human guinea pig João Pedro R. Feitosa, the 28-year-old Brazilian doctor who died during clinical trials for reasons kept secret for reasons of health patent by AstraZeneca.