[ Editor’s Note: Biden has been in a poor perceived game of showdown with Iran as to who would blink first on making a concession to renew the JCPOA. Biden is playing Mr. Tough Guy to avoid being roasted by the Repubs for ‘bowing down to Iran’, hence letting the Repubs block solving the problem, which is their goal.

It is a no brainer that Iran cannot, and will not conceed anything before the US rejoins the deal. To do otherwise would wave the green flag that it is willing to make more concessions to get some of it funds released to ease its sanctions pain but remain in a ball and chain position on the rest.

And worse, with the Iranian elections coming up, if Rouhani were to conceed, that would put huge wind into the political sails of the Iranian conservatives who will be much harder to deal with, if they will deal at all.

The Iranian election process will knock them out of negotiating probably all through the summer, and Biden will have a big flop in his foreign policy record to take the shine off his other accomplishments, like saving us from the Trump criminal politicos that basically abandoned the Covid battle to concentrate 100% of their efforts on saving  the disgraced Trump regime, that went down in flames with the key stone cops Capitol fiasco.

The reality now is the US is NOT in the JCPOA, and it is dreaming that from the position of being reneger it is going to assume the upper hand in telling Iran what it has to do.

If Biden blows this he has more to lose than the Iranians. Biden has to prove his integrity, not Iran. The latter has said that when the US honors the deal, Iran will dial back its nuclear activity to the beginning status, and then the US has to honor its trade commitments of the JCPOA. Iran is not going to pay twice for anything.

If Biden and Bliknen think they are going to get Iran to renegotiate the deal, they will look like a Trump and Pompeo in different suits, and they will not want that moniker around they neck. Biden has more to lose, and he knows it… Jim W. Dean ] 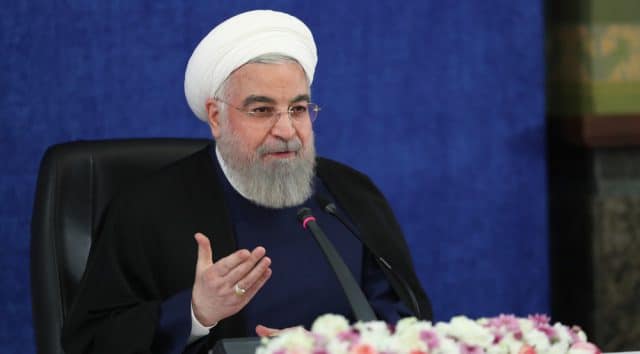 President Hassan Rouhani has criticized the new US administration’s foot-dragging on a return to compliance with the multilateral nuclear deal with Iran that it abandoned in 2018, saying Washington has so far failed to seize the “golden chance” for a “win-win bargain.”

“As Leader [of the Islamic Revolution Ayatollah Seyyed Ali Khamenei] announced, if they (the US) return to the JCPOA, Iran will also return to its commitments,” Rouhani said on Thursday, referring to the nuclear deal by the acronym of its formal name, the Joint Comprehensive Plan of Action.

“This would mean a win-win bargain for the region and the entire world, which would benefit them. The Americans were not able to understand that and failed to seize this golden opportunity. They have been dragging their feet, and we have been getting messages and news, which show this new [US] administration is far from the reality about Iran,” the president added.

He said the American officials’ “lack of knowledge” about Iran is ridiculous, adding that if they could get to know the great nation of Iran, its great civilization, and its golden homeland, they would treat the nation with humility.

The fate of the JCPOA, signed between Iran and the P5+1 group of countries — the US, UK, France, Russia and China plus Germany — after years of diplomacy and intensive negotiations, remains unclear mainly due to the US measures, including its reimpostion of sanctions on Tehran.

Joe Biden, the current president of the United States, has repeatedly spoken of a willingness to rejoin the Iran deal, but, in practice, it has so far been sticking with Trump’s futile pressure campaign. Washington says Tehran should return to full compliance with the deal before the US comes back.

Iran, however, says the US should first lift all the sanctions put in place under the Trump administration before the Islamic Republic returns to full compliance. Tehran believes it was the White House that complicated the circumstances by the pullout, which in turn prompted Iran to take remedial measures.

Elsewhere in his remarks, Rouhani reminded all those who call the JCOPA one of the most significant international agreements that it is the Iranian nation which has been shouldering the burden of the deal since Washington’s withdrawal about three years ago.

Pointing to an economic war being waged by enemies on the Islamic Republic, the president said, “We did not begin this war. Even after this war was imposed on us, we continued to fulfill all our commitments [based on the JCPOA] for a full year,” describing the patience as “the biggest honor of the Iranian nation in moral, political and historical terms.”

The Iranian nation has proved to the world that it is not after war and that all of the country’s nuclear activities have been for peaceful purposes, he added.

“It is now the P5+1’s turn to fulfill their duty under the current circumstances,” Rouhani said, warning the six major countries that every single day of their delay in abiding by their obligations based on the JCPOA and the UN Resolution 2231, which endorses the deal, would be detrimental not only to them but the entire world.

“We will continue on the path of production, development, morality and constructive interaction to the end,” the Iranian president said.