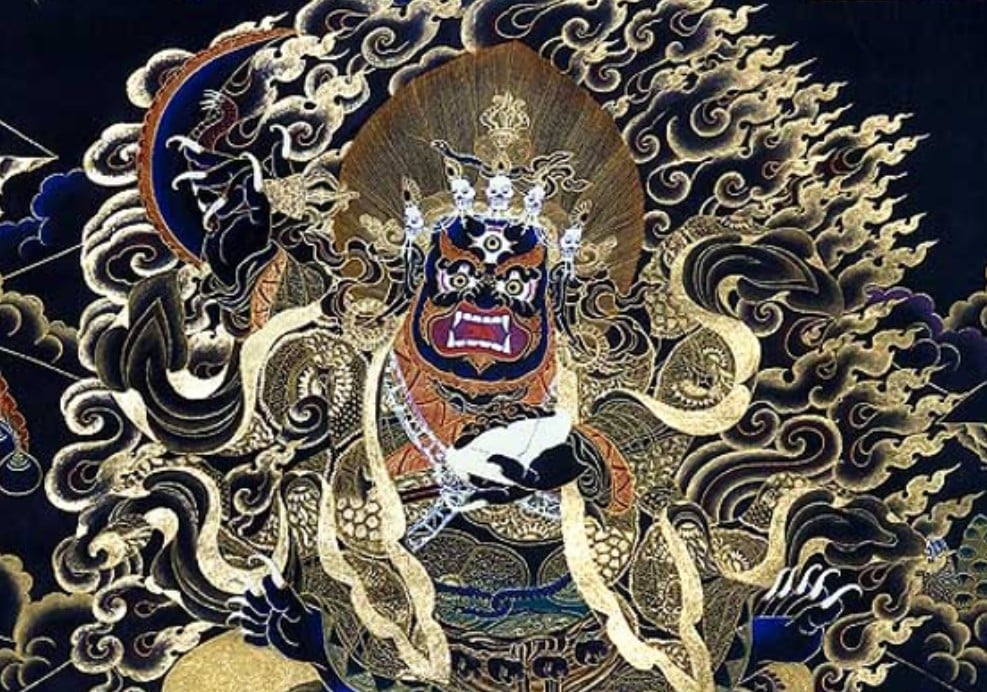 Guest Post: by Joe Wentrup
For Mahakala, the enlightened demon

When Pope John Paul II visited Cuba in 1998, he crowned the patron saint of Cuba, the Virgen de la Caridad de Cobre (Virgin of Charity of Copper). Every Cuban knew that as a matter of fact he was not crowning the catholic virgin, but the orisha who was represented by her: Oshún, our deity of sensuality, fertility, lakes and rivers. What the Pope knew and very few Cubans understood was, that a catholic virgin always represents Isis, the Egyptian deity of sensuality, fertility, lakes and rivers. A circle finally closed. 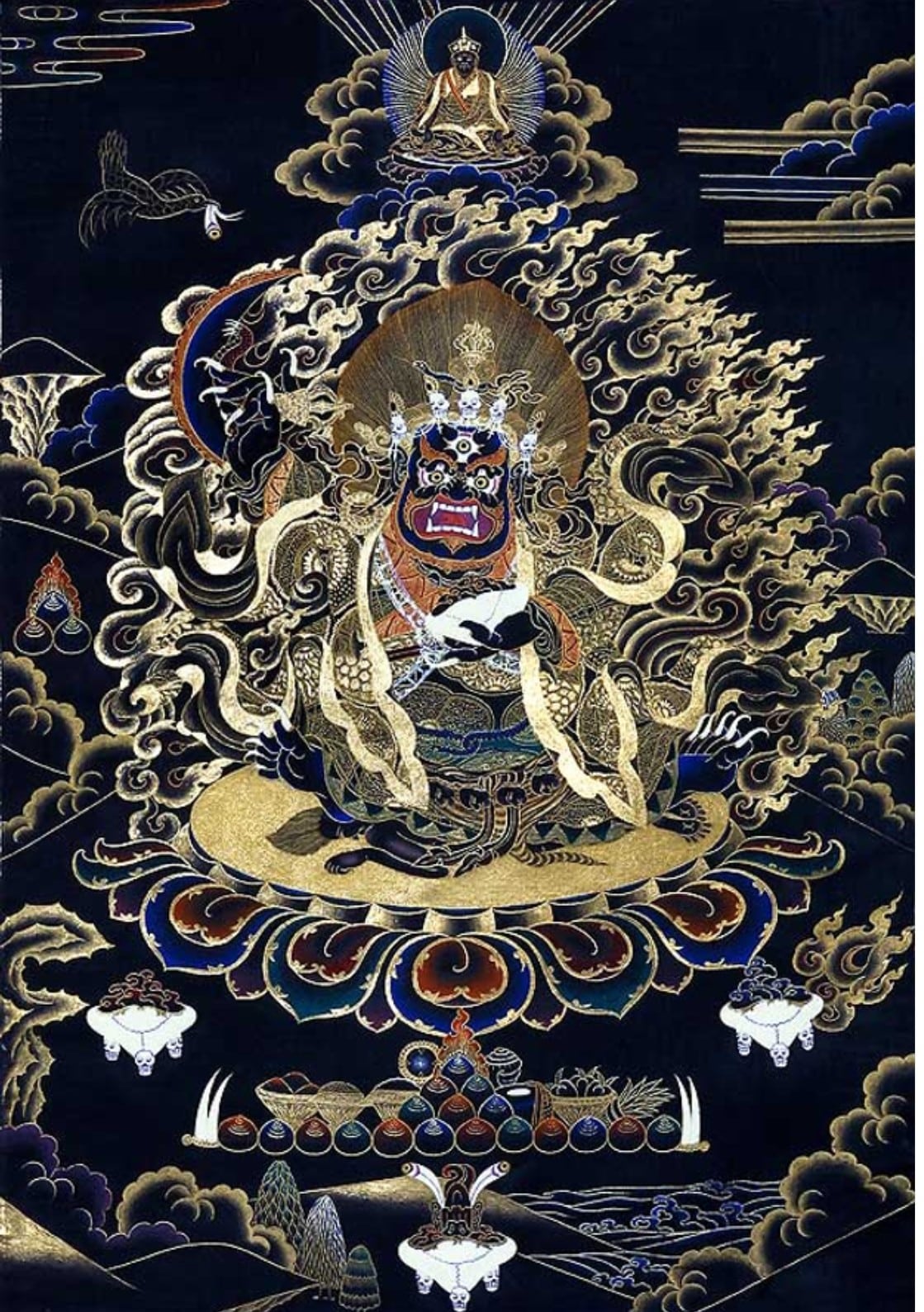 When Fidel Castro in 1961 declared the socialist character of the revolution, many were surprised. Some had thought he was a fascist, due to the Spanish Jesuits who used to educate the children of the wealthy. Others had the suspicion he was a CIA-asset, used to set up a new front in the Cold War. He was certainly more a Jesuit than a fascist. If he was a CIA-asset, I guess it was him who used the CIA. Because every Cuban would risk a war, even a nuclear one, even this sick, cold and still persisting one, to set their country free because Castro was, above all, a Martian, a follower of José Martí.

To understand Cuban thinking and mythology, you don’t have to be a communist, nor a catholic, nor a Spaniard. But you have to grasp the mind of José Martí. It was him who defined that special form of inclusive Cuban patriotism: Patria es humanidad. He died for this fatherland in a fight where Cubans had to pit machetes against well armed soldiers. They were close to victory against the Spaniards, when the US blew up the Maine in the harbor of Havana and joined the war to “help” Cuba. A trick the US pulls off about every twenty years. Cuba became a semi-colony, a state that only ended with the revolution. Another circle finally closed.

Cuba is a catholic country that isn’t catholic, a communist one that isn’t communist, and a country with frequently opposing African, Chinese and Native American roots, though in the end it is something totally different. Much like other Latin American Countries, one might think. But in Cuba the old hierarchy of money, race and church is too weak to maintain the classic order. Its multiple layers melt horizontally into a multidimensional amalgam of opposite beliefs that coexist without the traditional suppression and defamation (except everything that gets torn up by that brainless political dichotomy, which in Cuba is becoming less and less important).

This amalgam, built upon Martian thinking and multiple ethnical, religious and political frontlines, is the ground on which the young gods stand only recently freed from folkloric kitsch and limits of race and class. Cuba is the only western country where pagan gods dwell in huts AND palaces. Their origins go back to the colonies from where the powers took their slaves. The Spaniards exploited Nigeria and took the highly developed Yoruba. Their belief system, after fusing with Catholicism, became regla de ocha or Santería. But one can easily tear apart this syncretism and discover purer states. In fact, in Cuba survived more orishas than in Nigeria, where one of the two highest deities is under grave threat of todays monotheism: Oloddumare, the female counterpart of Olofi; both too far away from human existence for communication, not to speak intervention.

This happens instead with the orishas, divinities of different aspects and very human strengths and weaknesses. In fact, they all mount back to human beings, be it divine incarnations or exceptional humans. One of them is Oshun, the fertile river goddess, deep in love with Shango, the warrior dancer, lord of thunder and war. You can count a dozen of them easily, though there are many more. They are attended by priests, but a clerical hierarchy does not exist, everybody can become a santero, while it is reserved to heterosexual men to become a babalawo. In everyday life though, their ability and authority is not much different. Both have the power to initiate the adept, the orisha’s presence being assured by recipients with ritual content, frequently a stone from a river forming part.

While Santería generally works with white magic, there’s a strong influence from voodoo which swept to our shores from the neighboring island of Haiti. It’s my impression that voodoo differentiates less between gods and demons than Santería does and that Malachi Martin is probably right when he points to the weakness of Haitians to be easily obsessed by entities. The cause might be that there’s less dialogue. In voodoo, there exists plenty of headroom for trickery on both sides and you can’t always tell who you’re dealing with. The gods, or loas, are rather treated as abstract energies that can be directed by branches of certain trees and bushes (I wonder if the similar looking fasces, which gave fascism its name, had a similar function). And there are also stones. And there’s blood.

Morally and spiritually, this can become an indissoluble contradiction, because in santería, one has to feed the orishas. Until the Third Temple is erected, Havana is the world’s capital of blood sacrifice and a portal to gods … and demons. In Cuba, voodoo is known as palo monte or palo mayombe and black magic is mostly derived from that practice. Adolfo Constanzo rendered invisible the deliveries of Mexican drug cartels and didn’t shrike back from human sacrifice. On the run, surrounded by police, he saw on TV how they burned his protecting altar and only then decided to die by an aid’s bullet. Fidel Castro, during the Angolan war, is said to have visited his African ally where he bathed in the blood of an elephant, obtaining the power to kill at distance. I would drop this into the urban legend drawer, if it was not for the person that told me so.

Again, we live in a multilayered and multidimensional world, where the same fact can be right and wrong. Absolute truth is unknown, as it is in the arts. My wife’s father was a born Haitian, occultist and Freemason. He was also the director of a dancing company. Lidia Cabrera, the most important chronologist of palo monte, was a poet, as is Rogelio Martínez Furé, maybe the deepest in the knowing alive. My wife, when she entered santería, was told she had to find her father’s stone. We’re still looking for it.

Music, arts and gods walk hand in hand. If they let go, they enter demon land…

Jack Heart -We are living in a post-apocalyptic era where the only constant is the millstone of isolation that weighs down upon the sentient like the world on the shoulders of Atlas. Speak and no one hears, cry and no one cares, laugh and surely you are as mad as those who have brought us here. Those Who Would Arouse Leviathan is an inside account of how and why they did. Long Island is “an evil dirty place.” The Montauk Project, Flight 800, and the Amityville Horror, I am a witness to all of them and this book is my testimony.

Amazon for eBook or paperback: https://www.amazon.com/Those-Who-Would-Arouse-Leviathan-ebook/dp/B08R29HHQR/

All I can envisage is smothering Hyman Roth. Does that mean I am deluded, or simply a 1970s family guy?

Actually its quite amazing Julian that America set gangsters Myer Lansky (Hyman Roth) and Lucky Luciano loose on these poor peasants to pimp off their daughters and turn Havana into the capital of decadence for Europeans and managed to sell it to the rest of the world as Capitalist prosperity. Unfortunately Lansky never did really get smothered and went on the build the beast we now call Israel with his pimps fortune…