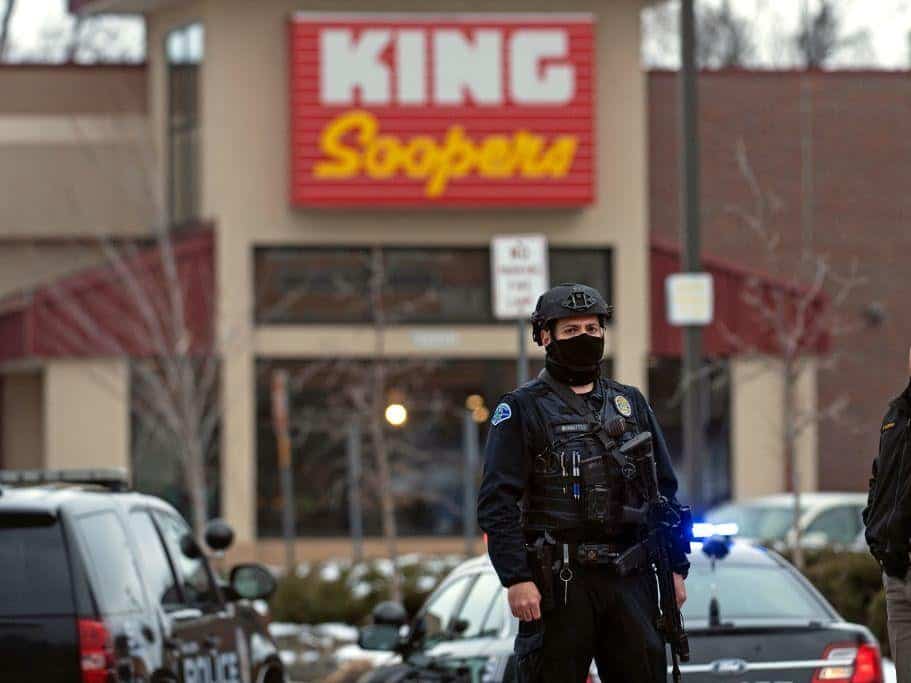 Happy Easter everyone! I hope this finds all y’all happy Easter bunnies. The shootings at the King Soopers supermarket in Boulder Colorado on March 22nd have led to predictable calls for gun control. Equally predictably the MSM have fallen hook, line and sinker for the lone gunman theory. No one is asking how Syrian American dual national Ahmad Al Aliwi Al-Issa managed to acquire enough ammunition to carry out the shootings or who put him up to it.

It is highly unlikely that al Issa woke up on the morning of the 22nd and decided that he would shoot up a supermarket. No credible motive for attacking a King Soopers store has been suggested. Had they short-changed him? Did he have a philosophical objection to BOGOF offers? It can’t have been their prices – I see that they’ve got some nice-looking strawberries on this weekend at only $3.49 lb.

Part of the Kroger chain, King Soopers has been a feature of the Colorado retail scene since 1947. Colorado is my favorite state and I’ve probably shopped in a King Soopers somewhere, possibly their Durango store. There is absolutely no reason why anyone would want to shoot them up, save possibly Walmart.

The only political beneficiaries are the Democrats and the Biden regime, which wants to scrap the Second Amendment. Evil though they might be however, no offense intended, it is difficult to see even the Democrats organising a mass murder in Colorado. Texas possibly, but not Colorado.

There doesn’t seem much doubt that Al-Issa was the shooter. He was arrested inside the store, having fired at police. He had two guns with him, a .224 cal. Ruger AR-556 pistol, with a 10.5” barrel, and a 9 mil semi-automatic, which he does not seem to have used.

I’m not being dogmatic about there being just one shooter – there have been numerous instances where the authorities have concealed the existence of other shooters, most famously at Vegas and Oslo. For the Oslo shooting the DVD’s Norwegian station even drafted a rambling pseudo-right-wing manifesto, which the naïve MSM lapped up.

Determining the number of shooters will depend upon ballistics analysis (firing angles, how many calibers used etc.), careful examination of the timeline (could a single shooter have fired all those shots?) and CCTV and satellite imagery. The latter of course is particularly useful in the case of outdoor shootings like Oslo. Muzzle flashes usually show up nicely!

The Ruger pistol is a short-barrel version of their excellent assault rifle. It’s a powerful, albeit short-ranged weapon. It’s unlikely that Al-Issa came up with the choice of gun, indeed he may not even have paid for it. It’s quite normal for the sponsoring agency to provide the cash for the guns and ammo.

The Ruger may have been purchased lawfully (there’s very little information about the 9 mil) but what about the ammo? The MSM and half-crazed gun control advocates, if that is not a tautology, usually obsess about the guns and overlook the ammo.

Purchasing large amounts of ammo is illegal in many states and will attract attention in others. ‘I want to shoot up a supermarket, so I’ll need some extra boxes’ is the sort of request that will get you arrested in Colorado. It would even get you arrested in Texas, except possibly in Midland.

Not much is known about Al-Issa, except that’s he a Syrian who came with his family to the States aged about three. On what basis, one wonders? Reading the MSM you would think that the US Embassy in Damascus handed out visas in the old days with the rations. At the moment in fact there isn’t even a US Embassy, just a US interests section in the Czech Embassy.

There needs to be a detailed check into his background. Is there an ISIL connection, for example? Are the family vulnerable to threats? Al-Issa is being portrayed as a nutter, but there’s no evidence that he’s ever voted Democrat or believed in global warming.

Nutters are popular. No prison time and no detailed inquest into motives. The classic alleged nutter was John Hinckley Jnr, who tried to assassinate President Reagan at the Washington Hilton on March 30th 1981.

The assassination was of course set up by Bush 41 (affectionally known in the Intelligence Community as “Der Obergrüppenführer”), who had a connection to Hinckley, whose father Jack is rumored to have been connected to the CIA. As I point out in Spyhunter the traditional role of the Vice-President is to preside over the Senate, attend funerals and arrange for the assassination of the President.

Several theories were advanced about Hinckley – that he was heterosexual, obsessed with Jodie Foster and a schizophrenic. I’m not buying any of them.

The plan to assassinate President Reagan was hatched long before the election. Bush 41 had arranged for the sand filters on the helos in the Iranian hostage rescue operation to be removed, leading to their crashing. He knew well in advance that the Reagan-Bush ticket was likely to prevail in November 1980. He also knew that he wasn’t popular enough to win the nomination against the great Ronald Reagan.

There was plenty of time to groom Hinckley. Interestingly the psychiatrist treating him in the pleasant town of Evergreen Colorado concluded that he wasn’t mentally ill. Dr Hopper was probably right. The Jodie Foster obsession could easily have been manufactured. There is no evidence that Hinckley ever had a successful sexual liaison with a woman. The possibility that he was gay doesn’t seem to have occurred to anyone.

The evidence for Al-Issa being insane is not particularly strong. Insanity can easily be faked, not least if a deal has been done and doctors have been asked not to scrutinize an inmate too closely.

Al-Issa and Hinckley share one other thing in common: FBI protection. Al-Issa joins a long list of mass-murderers known to the FBI but not stopped by the Bureau. Hinckley wasn’t even interviewed by the Fibbies when he tried to board a plane in Nashville Tennessee in October 1980 with three handguns!

I know that security has been tightened up since but even in 1980 I would have expected three handguns in your cabin baggage to attract a certain amount of attention. ‘Please fasten your seatbelts, secure your tray tables and make sure that your handguns are safely stowed in the overhead lockers.’ ‘I want to get off now, hell, this is worse than United’

Don’t eat too many eggs!