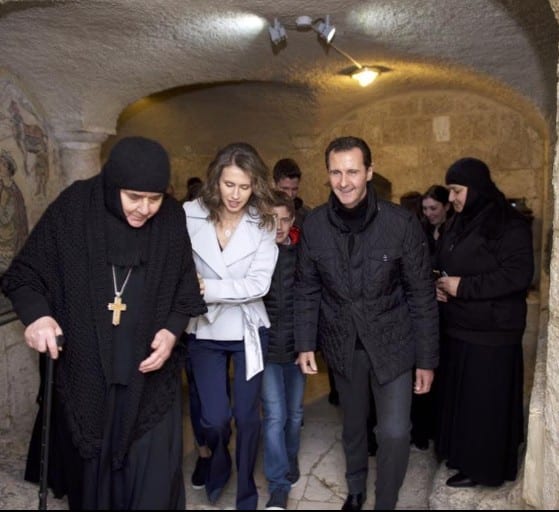 Syrians know that their survival is because of Assad

The Western public just has to get used to it – Assad’s not going anywhere, and not because of what Russia or Iran says, but because he’s Syrians’ choice.

Syria’s President Bashar Al-Assad went with his wife Asma to a Christmas Mass concert in Damascus. For many people in the West, the photos that soon appeared of Bashar and Asma hugging and being hugged by small children, old men and young women would probably cause consternation or apoplexy – if they were to see them.

In an analysis by David Macilwain, the Russian Insider, Macilwain added but this is unlikely, as Western media would exercise its duty of care to protect people from such an upsetting sight, and the public disorder that might result.

It shouldn’t worry however that people’s perception of the Syrian leader might change for the better; it is simply not possible for this to happen, any more than it is possible that Syrians would change their minds about President Assad.

The Western media apparatus has strange standards of propriety – often finding it necessary to obscure the images of the wrong people. When some footage emerged of the now infamous ‘heart-eating rebel’, it was not his face which was blurred out to protect his identity but the body of the poor Syrian soldier this ‘freedom fighter’ had just disemboweled.

Showing how little things have changed in the two years since that event – one that should have been a ‘wake-up call’ for the ‘Free Syrian Army’s’ Western cheers squads – we saw a repeat of it only weeks ago following the shooting down of Russia’s bomber by Turkey.

In deeply shocking footage of the Turkish insurgents celebrating over the bloodied body of the Russian pilot they had just murdered, it was his identity our media chose to protect us from.

And those media – CNN Turk and Fox news – had no compunctions about revealing the identity of the leader of this group despite it spoiling their whole story, as he was immediately identified as not even Syrian, and anything but a ‘moderate rebel’.
Again this echoed the story of ‘Abu the organ-eater’ – who was interviewed at the time by Paul Wood of the BBC, and given rather a sympathetic hearing for his- ”moderate cannibalism!”

When we consider how it is, how on earth it can be – that such false and misleading narratives about President Assad and the nature of the Syrian war still persist, we are examining the heart of the conflict.

Maybe the very simplicity of this narrative is the key, as it is one which could so easily take hold in the minds of the unthinking masses. No amount of argument or reasoning, or even the evidence of their own eyes seems able to dislodge it from the collective psyche.

It is not just a simple, but rather a simplistic narrative, like one in a fairy tale – ‘once there was a big and very very bad tyrant who lived in an ancient castle with his terrible family, and rained down fire upon his unfortunate subjects, who only wanted to be free to practice their faith…’ And it is a fairy tale.

Bashar Al Assad’s family are Alawite muslims, like a million others in Syria, and millions more across the border in Turkey. But Syria has long been a proudly secular society – the Syrian ‘Arab Republic’ – where such distinctions of religion or ethnicity are not a basis for discrimination.

Until the stirring up of sectarian tensions by the foreign fomenters of the armed insurgency many Syrians didn’t even know, or care about their neighbors’ religious affiliation – much as in the secular democracies of the West.

Emphasising this secular character of Syrian society, and quite contrary to the pervasive western fairy tales, the religious affiliations of both government and army members broadly reflect that of the community as a whole, with a majority being Sunni muslim. And apart from leading a government which is not ‘Alawite’, President Assad has led by example – his wife Asma is a Sunni muslim too.

Considering the attention given to ‘peace talks’ and plans for a ‘political solution’ to the Syrian conflict by Western governments, media and NGOs over the last four years, the passing of last week’s UNSC resolution with a ‘road-map’ for Syria’s future received astonishingly little attention.

The actual details of what was agreed received even less, and we might imagine this was partly because some parties agreed under duress and were loath to admit that they had actually agreed to a plan they had previously rejected. (The ‘duress’ could have been following Russia’s laying down the rules on who gets targeted in Syria, when the deployment of its SA-17 air defense system grounded US bombers supporting their ‘rebel forces fighing Da’esh’.)

Betraying the reality of the new plan, the media wasted no time in returning to familiar themes. ‘Russia was bombing ‘moderate rebels’ instead of Islamic State.’ ‘Russia was just propping up Assad’. ‘Assad was killing civilians again’. But we also had new interpretations on what had been agreed, before the ink was even dry on the paper, and before Kerry had time to contradict what he’d last said.

And one by one the leaders and representatives of the US, UK, France and Germany got back into the familiar groove – ‘Assad has lost all legitimacy’ – ‘a man who has killed his own people cannot be leader’ – ‘Assad can be part of the transitional government, before leaving’. How soon they forgot what even they had repeated, – as some great democratic aspiration – that ‘Syrians should decide who will be their leader’.

Which is of course what Sergei Lavrov, Vladimir Putin and Bashar Al Assad himself have been saying for years. And Syrians have already decided – Assad is their man, for now and into the future, helping to rebuild the society he has worked so hard to save from the terrorist armies of the ‘Western allies’.

Syrians know that their survival is because of Assad – not in spite of him.