[ Editor’s Note: We will give the younger Mr. Biden credit for doing the book, even if it was due to his wanting the money, as it might deflect attempts of the Trumpers to smear President Biden with the family black sheep.

This is even more silly is when you look at the Trump family, where you see that the fruit does not fall far from the tree. Hunter Biden is not worthy of any attention. Lots of famous people have had kids do the spiral down on drugs route. It sadly has been a commonly shared tragedy.

The Biden family seems to have millions, certainly not earned from public service, and certainly not much news about who the astute investor was. Hunter is not living in fear of not being able to pay his rent.

He has been the fortunate son, who came through his drug problem only to enter a new career as an influence peddler.

Dear Hunter. Do us all a favor. Go low key, stay out of the news, and give your family a break by doing so. You are lucky to have a supportive family.

Whenever your name comes up, it detracts attention from what your father is trying to do. The world is tired of the overrated offspring of major public figures thinking the world needs to acknowledge them as special.

If you don’t believe me just Goggle ‘rich brats’ and see what comes up. So please go away, until your father is no longer in office… Jim W. Dean ] 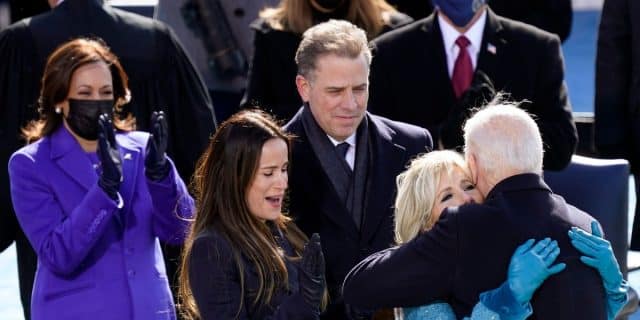 US President Joe Biden’s notorious son Hunter Biden has opened up about his drug addiction and other scandals, which dominated the US presidential election last year, in a new memoir.

The book, releasing this week, chronicles the 50-year-old’s struggle with substance abuse, personal scandals, unceremonious exit from the US military and shady dealings in Ukraine.

“I’ve bought crack cocaine on the streets of Washington, D.C., and cooked up my own inside a hotel bungalow in Los Angeles. I’ve been so desperate for a drink that I couldn’t make the one-block walk between a liquor store and my apartment without uncapping the bottle to take a swig,” writes the son of President Biden in the prologue of ‘Beautiful Things’.

“In the last five years alone, my two-decades-long marriage has dissolved, guns have been put in my face, and at one point I dropped clean off the grid, living in $59-a-night Super 8 motels off I-95 while scaring my family even more than myself,” he adds.

In a television interview on Sunday, Hunter said he was barely sleeping and consuming cocaine and alcohol after the death of his brother Beau in 2015.

“I spent more time on my hands and knees picking through rugs, smoking anything that even remotely resembled crack cocaine,” he told CBS, reminiscing about time when his father was the vice president.

“I went one time for 13 days without sleeping, and smoking crack and drinking vodka exclusively throughout that entire time,” said the Yale-trained lawyer and lobbyist.

The junior Biden, who was thrown out of the US Navy Reserve after failing a drug test, and struggled to overcome the addiction for years.

The problem only got worse after his elder brother succumbed to brain cancer in 2015, when his binge-drinking vodka grabbed headlines and became a subject of political controversy in the US.

Hunter’s drug addiction was raised by the former US President Donald Trump during the high-voltage presidential debate in September last year.

Trump: “Hunter got thrown out of the military. He was thrown out, dishonorably discharged…”
Biden: “That’s not true, he wasn’t dishonorably discharged.”
Trump: “… for cocaine use. And he didn’t have a job until you became vice president. Once you became vice president …”
Biden: “None of that is true.”
Trump: “… he made a fortune in Ukraine, in China, in Moscow, and various other places.”
Biden: “That is simply not true.”

In October last year, a New York Post article exposed Hunter’s shady dealings in Ukraine, which were found on a laptop that he apparently left in a Delaware repair shop in 2019.

Hunter was a director on the board of Burisma – a Ukrainian-owned private energy company while his father was the Obama administration’s pointman on US-Ukrainian relations.

“There’s a current Department of Justice investigation into your finances,” the CSB interviewer asked Hunter. “What is it about? Can you say anything?”

“I can’t. But I can say this, is I’m cooperating completely. And I am absolutely certain, 100% certain that at the end of the investigation, that I will be cleared of any wrongdoing,” he replied.

Hunter had in December last year put out a statement saying his “tax affairs” are under federal investigation, which brought his years of shady financial dealings back into limelight.

His finances are currently being investigated by the US Department of Justice, but speculation is rife that the Biden team is making all-out efforts to save him from legal action.