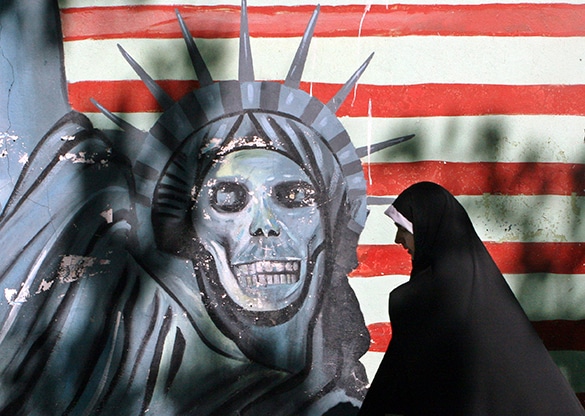 We knew that the military industrial complex, the Neocons, and former Trump administration officials and regime change proponents wouldn’t give up without a fight. We knew that they would come out with baseball bats and chainsaws trying to regain the narrative on the Iran nuclear deal. They have recently perpetuated one categorical lie after another so that the vast majority of Americans will not have access to the actual facts on Iran. Matthew Petti, a reporter at Responsible Statecraft and research assistant at the Quincy Institute, has shown how.

Several former Trump administration officials discussed their strategy for lobbying against diplomacy with Iran in the Biden era during a Friday discussion on the Clubhouse voice chat app.

The discussion was hosted by former National Security Council official Richard Goldberg, now a senior adviser at the hawkish Foundation for Defense of Democracies, to discuss the possible lifting of economic sanctions against Iran. The discussion was open for the public to listen to, but only speakers chosen by the moderators could participate.

Several former Trump administration officials and regime change proponents attempted to walk a tightrope between making a progressive case for pressure against Iran and portraying progressives as appeasers of anti-American regimes.

“A lot of people on the left are probably not even aware of the extent of human rights abuses, ecological abuses, labor rights abuses, women’s rights abuses, gay rights abuses that are going on,” said Len Khodorkovsky, who helped design the Trump administration’s messaging on Iran at the State Department. “Perhaps if some of the issues were reframed in those terms, there would be a much bigger coalition that would object to the current trajectory of the Biden administration’s policy.”

At the same time, Khodorkovsky claimed that left-leaning groups were often driven to “jump in on the side of the [Iranian] regime” by “anti-Israel” and “anti-Saudi/Emirati/Bahraini policy reasons.” He said that the Biden administration was “hellbent” on “undoing the last four years” of pressure on Iran.

Gabriel Noronha, another former State Department official, said that the Biden administration “seems to have an alignment with Russia and China.”

Mariam Memarsadeghi, head of the Tavaana E-Learning Institute for Iranian Civil Society, chimed in with a similar line. Memarsadeghi used to run the now-defunct Iran Disinfo Project, which was originally funded by the State Department to counter Iranian propaganda but lost its funding when it attacked American critics of Trump administration policy instead.

“If the foreign policy is supposed to be progressive, then Iran really should be a focus country, but instead the Biden administration, following the Obama approach, is closing its eyes to what’s happening in Iran,” Memarsadeghi said. “What it’s really doing is trying to satisfy a domestic constituency that’s really focused on these woke politics. It’s identity politics. It’s wokeism but projected onto the global stage.”

She added that “polarized” politics around foreign policy are “a threat to our national security.”

The Biden administration is now in talks to return to the Joint Comprehensive Plan of Action, a 2015 agreement between Iran and six world powers. Under the original deal, world powers had agreed to lift their embargo on the Iranian economy in exchange for strict limitations on Iran’s nuclear program.

The Trump administration broke from the deal in 2018 and began a campaign of “maximum pressure” that former national security adviser John Bolton says was aimed at overthrowing the Iranian government.

In the time since, Iran has increased its nuclear activities and the United States and Iran have nearly gone to war twice. The collapse of the Iranian economy sparked protests in November 2019, and Iranian security forces responded by shutting down the Internet and massacring hundreds of demonstrators.

Many Iranian dissidents within Iran disagree with the U.S. pressure campaign.

Sussan Tahmasebi, an Iranian women’s rights activist who now lives in the United States and leads the group FEMENA, argues that the pressure campaign has only worsened the situation.

“There has been a serious deterioration of human rights in Iran,” she wrote in a text message to Responsible Statecraft. “These broad economic sanctions haven’t improved the human rights behavior of the State, but they have made the economic situation worse for Iranians.”

Tahmasebi notes that the pressure campaign has “securitized” the regime’s approach to civil society activists, “who are regularly targeted and accused of collaborating with foreign powers,” while making it “very difficult for volunteer activists to continue with their activism, when they are pressed about meeting their own economic needs.”

“I’m not sure how sanctions are supposed to result in regime change without putting their greatest pressure on ordinary people, who as a result of worsening economic situation are expected to revolt and who will probably face a bloody crackdown,” Tahmasebi concluded. “The maximum pressure and regime change advocates have to be more transparent about how they envision sanctions will bring about their goals, without targeting and harming ordinary Iranians, and without military intervention.”

Biden administration officials have also called the pressure campaign a failure and vowed to return to the JCPOA as a springboard for diplomacy on other issues. A recent series of polls by the Chicago Council and IranPoll found that six in ten Americans and half of Iranians now support the deal.

Much of the Clubhouse discussion on Friday focused on attacking groups who favor the 2015 deal. Ellie Cohanim, formerly the Trump administration’s special envoy for combating antisemitism, contended that there was an “Iran Lobby” pushing the regime’s talking points.

Cohanim previously accused Jason Rezaian, an Iranian-American journalist who had been taken hostage and tortured by the Iranian government, of acting as a pro-regime mouthpiece.

Cameron Khansarinia, policy director of the pro-regime change National Union for Democracy in Iran, attacked diplomacy proponents by comparing U.S. pressure against Iran to the international campaign against apartheid in South Africa.

“You can only stand on one side, the Iranian people or the Iranian regime,” he said in the Clubhouse discussion. “If you’re wishy-washy, or saying, ‘well, we can only make things worse,’ that’s not true.”

“NIAC doesn’t exist in and of itself. It exists in a universe of like-minded propagandists,” Khodorkovsky added. He said that “one group that comes to mind” is the left-leaning pro-Israel organization J Street, which supports the 2015 deal.

The National Iranian American Council emailed a statement to Responsible Statecraft in response.

“NIAC welcomes and encourages debate, and believes everyone should have a voice, even if in disagreement with our policy positions. This said, polls show a vast majority of Americans, Iranian and otherwise, agree with our stance that the U.S. must return to the Iran nuclear deal,” the statement reads.

The statement accused several attendees of using “U.S. government resources to attack domestic opponents,” referring to the Iran Disinfo Project and other Twitter attacks on NIAC. It also claimed that FDD and other pro-regime change groups “hide the sources of their funding and may even receive funding from foreign agents attempting to manipulate our democracy.”

“It is tragic that these interests not only destroy Iranian lives and undermine Iranians seeking their own rights, but also undermining Americans who don’t want war,” it concludes. “We hope there can be an opportunity to engage in real dialogue on the issues within our community and that the expected debate on JCPOA return is actually about the merits rather than ideological posturing and attacks from enemies of democracy.”

Logan Bayroff, communications director for J Street, told Responsible Statecraft by phone that his organization “is very proud to work with a large coalition and a group of partners, including NIAC, in support of diplomacy.” He said that the Trump administration policies would have forced the United States and Israel to choose between “having to launch another disastrous and deadly war in the Middle East or having to accept an Iran armed with a nuclear weapon.”

“At this point, it’s frankly outrageous that [Trump administration officials] keep peddling their same nonsense arguments,” he said. “We’ve seen maximum pressure completely, utterly blow up in their faces. In every sense now, we are worse off now than we were under the JCPOA.”

“The decent thing to do is to admit defeat and quietly slither away,” Bayroff added.