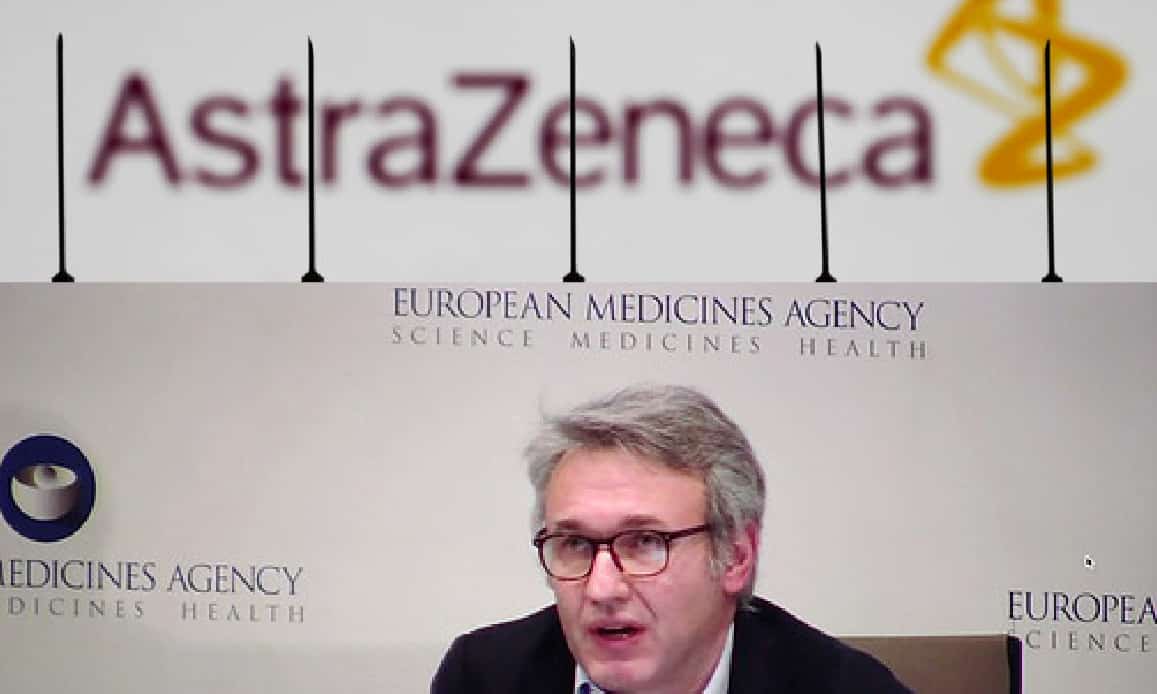 The “benefits” of the AstraZeneca vaccine “outweigh the risks”. The EMA reiterates this in a note at the end of its evaluation. “Rare events” of cerebral thrombosis “are very rare side effects” of the AstraZeneca vaccine. This was reported by the EMA in a note. “EMA reminds healthcare professionals and people receiving the vaccine to remain aware of the possibility that very rare cases of blood clots combined with low blood platelet levels occur within 2 weeks of vaccination,” writes the European Agency in the note. “So far, the majority of reported cases have occurred in women under the age of 60 within 2 weeks of vaccination. Based on the evidence currently available, specific risk factors have not been confirmed.” This is what the Italian press agency ANSA, which has always been a media sponsor of the AstraZeneca vaccine, half-Italian (read below to understand why), joyfully reports.

VT EDITOR – GuardianEurope’s drug regulator has denied it has already established a causal connection between the Oxford/AstraZeneca vaccine and a rare blood clotting syndrome, after a senior official from the agency said there was a link.

In a statement to Agence France-Presse, the European Medicines Agency (EMA) said on Tuesday it had “not yet reached a conclusion and the review is currently ongoing”, adding that it expected to announce its findings on Wednesday or Thursday.

In the cover photo, the EMA responsible for vaccine strategies Marco Cavaleri

“It is possible, for greater precaution, that the European Medicines Agency Ema indicates that for a certain category it is better not to use the AstraZeneca anti-Covid vaccine”. The Italian Undersecretary of Health Pierpaolo Sileri said on Radio 24, however, specifying that “this also happened for many other drugs” and that in the case of AstraZeneca the vaccine was used “in an extremely high number of subjects, while thrombotic events few reported are very few “.

The UK drug agency (MHRA) is also considering a proposal to restrict the use of the Oxford-AstraZeneca vaccine for young people. This was reported by the British television channel 4, citing informed sources. This occurs despite the fact that the vaccine, produced thanks to the vector of Chimpanzee Adenovirus provided by Park Science in Pomezia (Rome), is the only one of English origin, as the Anglo-Swedish multinational AstraZeneca has long been based in Cambridge.

Not only. A few hours later even worse happened in the United Kingdom where globalism reigns, but the mafia is not as close to politics as in Italy. “The University of Oxford has today suspended testing of its coronavirus vaccine in children while the authorities of regulations probe jab’s link with rare blood clots. A spokesman for the prestigious university said that the move was precautionary and that there were no health problems among the young people involved in the trial” reports the Mail Online.

“Oxford began testing the vaccine in children between the ages of 5 and 17 in February, with the aim of expanding the trial and testing it on 200 people. But scientists have stopped recruiting new volunteers, and it’s unclear how many children have already received a dose. Oxford is awaiting further information from the UK regulator, the Medicines and Health Products Regulatory Agency, before restarting the study, the Wall Street Journal reported. Marco Cavaleri, head of vaccines at the European Medicines Agency (EMA), said CVST – a brain block that can lead to stroke – occurs more often than expected in young people” adds the British newspaper.

The “bomb” was triggered by an interview given by Marco Cavaleri, head of the vaccine sector of the EMA (European Medicines Agency) to the Roman newspaper Il Messaggero. “It is now increasingly difficult to say that there is no cause and effect relationship between vaccination with AstraZeneca and very rare cases of unusual blood clots associated with low platelet counts.” He declared this speaking of the ongoing investigations on thrombosis cases recorded in the under 55, mostly women.

“In my opinion – he replies – we can now say, it is clear there is an association with the vaccine. What causes this reaction, however, we still do not know ”. “In summary: in the next few hours we will say that the connection exists, but we still have to understand how this happens.”

Germany has already understood this: which, after a study by the relevant scientific authorities, immediately blocked the AstraZeneca vaccine for the under 60s as Canada did for the under 55s, while Norway, Denmark and Olando interrupted its administration for the whole. population for a few weeks.

In Italy, on the other hand, its use continued to be encouraged despite the repeated deaths on which politicians and health professionals judged that there was “no correlation”, precisely in order not to eliminate the potential business of the supplier of the Adenovirus vector, Advent srl of the Park Science of Pomezia, financed in recent years by the governate of Lazio Nicola Zingaretti, former national secretary of the Democratic Party who supported the vaccination plans of the Minister of Health Roverto Speranza in both the Conte and Draghi governments.

Who will answer for the deaths if the EMA also confirms the danger tomorrow? In a normal company, the head of the vaccine’s strategies dr. Cavaleri would be fired on the spot. But since it is a pandemic emergency on which the Big Pharma controlled by Bill Gates and various powerful nations are making a profit, the horror show seems destined to continue on the skin of “human guinea pigs” only partially warned: from the modified package leaflet of the drug AstraZeneca which controls the rare risks of thrombosis, even lethal.

Gospa News, based on EudraVigilance data on adverse reactions to vaccines up to February, had raised the alarm since early March. But the EMA had confirmed the safety after a sudden stop and only two days of testing which had not led the Scandinavian countries to trust.

Even the dead are no longer enough to crush this trail of tragedies on the irrepressible wave not of the Covid-19 variants (for various experts caused by the reactions to the vaccines themselves) but of the billionaire business of the Big Pharma cartel (in the NGO One Nucleus) which also controls swab laboratories and clinical trials on drug safety since February 2020 despite an huge conflitc of interests. Where? In Cambridge, of course, the headquarters of One Nucleus and AstraZeneca, sponsor of the NGO together with Johnson & Johnson…