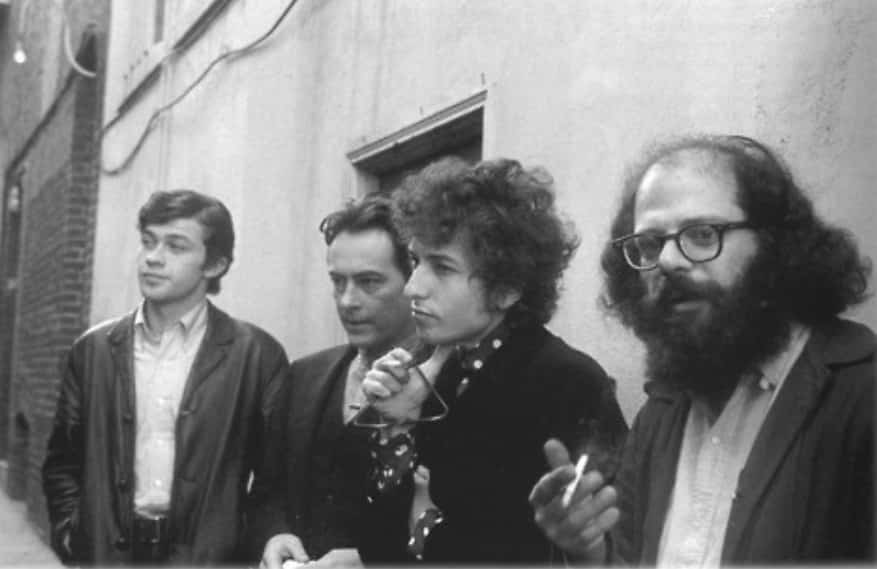 By Michael Dargaville for VT

When Allen Ginsberg screamed out his revolutionary poem Howl for the first time at the Six Gallery reading in San Francisco in 1955, a major crack was created in the USA Cold War military industrial iron clad war machine.

With communist parents, a homosexual, and a desire for God, Ginsberg’s poem became the anthem for the evolving worldwide counter culture that changed the face of the planet.
His beatnik buddy Jack Kerouac was there egging Ginsberg on as the audience of not more than 100 knew, deep in their hearts, a profound life changing event had happened.
Howl was a fierce political statement against fascist American war obsessed hegemonic insanity and united the dissident tribes of the western world to confront their governments, their military and their society at the deepest level.

It was a turbulent cry against McCarthyism and a plea for America to change its way. The poem not only became the bible of the latter hippie generation but also the punk generation.

By the 1960s this counter culture that evolved out of the USA spread to every corner of the western world as well as the entire world. It promoted everything Allen Ginsberg promoted such as spiritual socialism, anti-war, anti-imperialism, anti-militarism, LGBTQ rights, communes (that the Beats actually espoused and lived in and later radically expanded by the hippies), consciousness expansion, drug legalisation, feminism, ecological awareness and activism, a profound rejection of materialism at all levels, absolute freedom and much, much more.

The famous beat writers such as Allen Ginsberg, Jack Kerouac, Lawrence Ferlinghetti, Gregory Corso, Gary Snyder,  William Burroughs and many others developed the principles of this worldwide movement that utterly changed the consciousness of the western world. They promoted eastern spirituality in all its forms and laid the foundations of the worldwide New Age movement that later incorporated the extremely important alien disclosure movement.

San Francisco became the new Paris as this new spirit evolved that was deeply against this developing western fascist establishment hellbent on western imperialism, wars and western “values”.

The 1950s was indeed an absolutely pivotal time as the leaders of this counter culture became famous for their insanely brilliant poetry, fiction, philosophy, journalism and lifestyle. It was during the 1950s that the different groups started joining up and forming this very powerful new movement of values expressed earlier.

The founders of this worldwide counter culture clearly came from the war generation, or what could be called the Beat Generation. They were all born between 1910 to 1933/34. Their books, pamphlets and broadsides were appearing widely from the early to mid 1950s and continued through to the end of the decade.

When Jack Kerouac’s novel On the Road exploded on to the stage in 1957, a frenzy of worldwide activity began. Their rejection of American materialism was paramount in their vision. Kerouac imagined a “rucksack revolution” of peaceful loving souls helping little old ladies and rejecting capitalist consumer culture and everything it represented.

These counter culture founders of the 1950s also laid the groundwork of this new spirit of international travel, of constant roaming and searching for spiritual enlightenment.
Ginsberg and his long-term boyfriend, the American poet Peter Orlovsky, travelled Europe and North Africa widely before settling for a long period of time in India. While living there, both Ginsberg and Orlovsky grew their hair down their backs like Saddu spiritual “communist” wanderers. They were the very first hippies as they travelled India reading their poetry and learning Hinduism and spiritual enlightenment techniques including meditation. No modern western male on the planet at this time had long hair. No one. Just Ginsberg and Orlovsky.

Upon return to the USA, these long haired socialist peace and love revolutionaries then inspired an entirely new generation, the hippies.

Tens of millions of Beat inspired hippies brought the counter culture en masse to the entire globe. It was an extraordinary moment in history. Left wing, socialist, free wheeling, spiritual, strongly anti-war, the hippies turned every western country into entirely new civilizations. Hegelian Marxist “spiritual” philosophers such as Herbert Marcuse plus of course figures such as Allen Ginsberg along with an extraordinary range of poets, singers and bands including Bob Dylan (a close friend of Ginsberg), the Beatles (all friends with Ginsberg), the Rolling Stones, Joni Mitchell, the Doors and others catapulted a never seen before spiritual left wing revolution unseen on the planet.

Communes thrived, collectivism thrived, new theories thrived. Socialist agitation was everywhere. And during this time socialism thrived in western Europe via the socialisation of large sections of industry. The United Kingdom was then a very socialist nation. Euro-communism was later desocialised by neo-liberalism which had started in the 1980s and continuing into the 1990s.

Where I grew up in Sydney, tens of thousands of hippies following the famous Hippie Trail through North Africa and Asia, came from all over the western world and occupied entire suburbs changing the fabric of the city. I quickly became a “boy hippie” who became semi-famous as a folk singing surfer-skateboarder. I loved these times.

The rise of the New Left political movement really arose from the 1960s onwards because of the hippies. 1968 became a fundamental revolutionary year that nearly brought down the government in France.

In a way it was the beat and hippie generation counter culture who started the war on the Illuminati who are the corporate billionaire families who control the western world along with their billionaire minions. The Cold War, with the Vietnam War an aspect of the Cold War, was essentially an Illuminati project to destroy communism.

The hippies peaceful non-violent vision was better than Gandhi because it included sexual liberation plus it was deadly serious.

The New Age movement has exposed the USA deal with grey aliens, who only live for 200 years, and shown how our planet was nearly destroyed by Luciferic shapeshifting reptilian reptoid aliens before they were destroyed by the good galactic human alien/ETs in the year 1999 called the Galactic Federation.

The Galactic Federation, who are our forebears, now surround the planet wanting world government based on sacred sacrosanct socialist nation sovereignty and can give any country who seeks it FULL military protection. ALL GOVERTNMENTS KNOW THIS.
Tens of thousands of writers, journalists, websites, magazines have exposed this. I have met Galactic Federation aliens/ETs many times with super powers and have worked for them for 25 years.

They told me that I am in fact what is called a starseed, and I come from a highly advanced oriental human galactic planet on the far side of the galaxy who have 10,000 year lifespans. When they die they then reincarnate into another body for another 10,000 years. Reincarnation is indeed a truth, push by the hippies. I was born on Earth to help this planet. Far out!

However, despite the overwhelming momentum that the beat/hippie/New Age vision gave the world, it is often misrepresented in our own times by a fascist corporate Hollywood mindset and the endlessly reactionary right wing western media. Because of this an entire generation, Generation Y (born 1979 to 2001) have been brainwashed and have seriously imploded the consciousness of the worldwide counter culture.

Yet ultimately, the fortunes of the positive worldwide counter culture created by the beats and hippies and followed on by the punks will manifest again in Generation Z (born 2002 onwards) who are all starseeds, dying on advanced human planets and being reborn here to save and change this planet. THEY WILL BE A GENERATION OF ALLEN GINSBERGS. It may take a while to get them going but they will move on through the brainwashing. So despite its setbacks the sacred worldwide counter culture is only looking rosy despite what has happened.

Nevertheless it is now critical for the western world to stop this New McCarthyism promoted by western governments who attack China and Russia and many other countries in a bid to create havoc and give their “controllers” more time before they sink into oblivion.

Many think the western socialist spiritual counter-culture was critical of communism but it was not the case at all. Many western counter culture people strongly supported all types of communism. Ginsberg himself visited eastern European communist countries and Cuba widely in the 1960s offering friendship and sometimes getting into trouble. But by the 1980s Ginsberg was committed to communism enough to spend highly successful long-term teaching gigs in China where he thrived and offering a bond between the East and the West.

Western governments controlled by the illuminati tried to use the counter culture to smear and attack communism, but there were enough grassroots organisations to realise what was happening. And this what we urgently need in our current world crisis, grassroots organisations ready to confront western governments hellbent on war with an entirely “fake enemy”. And to allow once again this beautiful sacred socialist counter culture the ability to thrive.

BIO NOTES
Michael Dargaville is a punk poet, poet, philosopher, scientist, international journalist, fiction writer, mind-body medicine/natural medicine doctor, singer/performer, teacher-academic and pioneering skateboarder. He has lived and travelled widely in Asia including China, India, Indonesia, Thailand and Malaysia. He taught in many east Asian universities for nearly 20 years and at the same time wrote groundbreaking New Age alien/ET journalism getting tens of millions of readers worldwide, and translated into more than 16 languages. Many stories went outright viral on the internet.  Michael has published more than 100 books/pamphlets of poetry, fiction, philosophy/science and journalism. His poetry has been widely studied in universities. He has lived widely on small yachts as a hippie-punk to keep grounded in the New Age and is a spiritual socialist-communist peace activist.