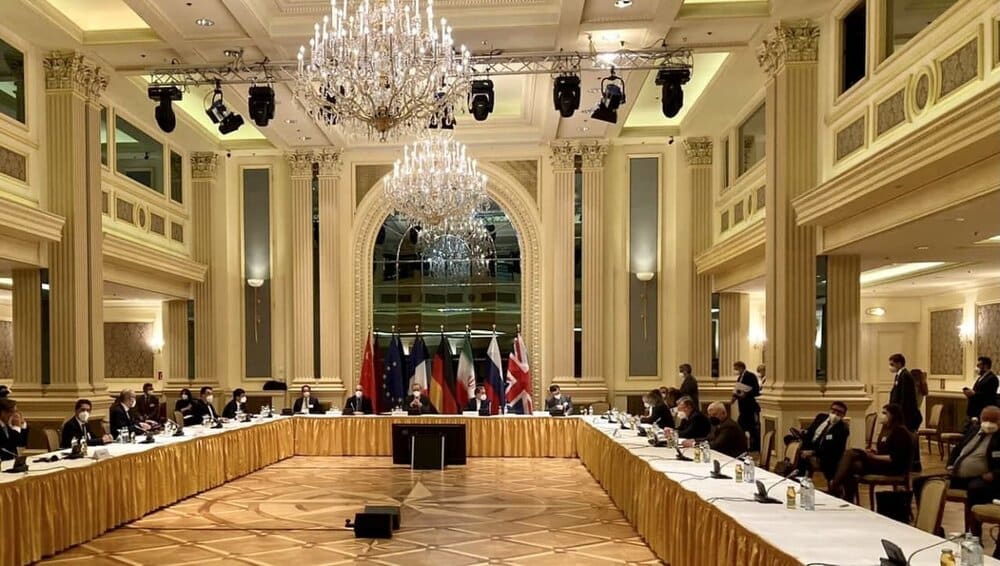 Outcome of Vienna talks on anti-Iran sanctions: ‘Almost nothing’

[ Editor’s Note: No one expected that a fix on the Iranian agreement mess would be found in the first round of talks. It is a victory when talks continue, as they will next Wednesday, but the danger lurks that one party is pretending that it wants a deal, but will try to maneuver the other party into taking blame for the failure.

The Israelis are weighing in, putting the squeeze on Biden with a 140 signature letter, half Democrats and half Republicans calling for new demands for curbs on Iran’s missile development, more curbs in its nuclear work, and funding regional terrorism.

The signers seemed to have no interest in Israel’s nuclear program, or why Israel needs intercontinental ballistic missiles, its use of tactical nukes in the region or its partnering with the US to use proxy terrorism as a regime change tool.

To suspicious me, this strongly suggests that the letter was organized by Israel’s effective espionage operation here, another item that large numbers in our Congress seem to have no concern over whatsoever, and are politically supported by this foreign element for its own interests.

I have not given up on Biden, for whom this is a challenge to undo the victory that Trump gave himself, showing the Israelis that he would do more than anyone else in America to serve its interests.

Trump is now desperate for Israeli muscle to help him survive the legal assaults he is under, and Netanyahu knows that. Obama was hated by the Zios, as he would not go down on his knees for them, a public humiliation that it demands for its political support.

Obama proved that political survival is possible, even going up against the Israeli 5th column here. After one of the assaults on Gaza, Obama removed the US Aegis destroyer away from the coast, removing its radar defenses which were the heart of the Israeli Iron Dome.

Gaza’s light rockets flew through Israeli air defences in numbers never before seen, and the Israelis had to bite their lip and suck it up, a reversal of the situation where Israel usually has us over the barrel.

And yes, not a word on this event was published in US media, other than VT, and no one challenged our reporting, as usual… Jim W. Dean ]

Talks between Tehran and the other signatories to the 2015 nuclear agreement in Vienna have yielded no results so far, with Iran’s top negotiator saying there was no agreement yet on how sanctions will be removed or the verification of their removal.

On Friday, envoys from Iran and the P4+1 group of countries — Britain, France, Russia, and China plus Germany — wrapped up four days of talks in the Austrian capital aimed at removing sanctions on Tehran and discussing other issues.

The fate of the multilateral deal has remained uncertain since May 2018, when former US president Donald Trump pulled his country out of the accord and re-imposed the anti-Iran sanctions that had been lifted under the UN-endorsed document.

Trump’s administration then launched a campaign of “maximum pressure,” under which it placed other sets of sanctions under many headings on Iran. A US delegation had also traveled to Vienna, but it did not have Iran’s permission to attend the discussions.

During the negotiations, two expert-level working groups discussed the sanctions Washington might remove as well as the nuclear curbs Tehran might observe, and reported their conclusions to the JCPOA Joint Commission.

‘Processes of sanctions relief, verification not yet finalized’

Speaking to Press TV on Friday night, Deputy Foreign Minister Abbas Araqchi, who headed the Iranian delegation to the Vienna talks, said the discussions will resume on Wednesday.

“The conclusion is that we think we are going in the right direction and that we have to continue. It was something that all delegations agreed. We had three days of intensive discussions in two working groups and the job done by the working groups was fairly good, but still they need to continue discussions, especially in the field of sanctions lifting because it is so complicated,” Araqchi said.

“Today, we heard the reports by the two working groups. And we decided to give them a break to go back and have more consultations in their capitals and we come back fresh on next Wednesday to resume the talks,” he added.

Explaining Iran’s stance on the verification of the sanctions’ removal, Araqchi said, “What we mean by verification is to see the effects of sanctions lifting in practice. So, it is not enough for the US to sign waivers or executive orders.”

“They have to officially sign [the orders], but what matters for us is to see the effects of sanctions lifting on the ground. And we insist that we have to verify what is lifted. This needs its own methods that we are working on. I don’t know how long does it take. But, we stand ready to discuss with other JCPOA participants for a fast and easy verification.”

Araqchi also reiterated Iran’s position that the US should take the first step to lift all its sanctions on the Islamic Republic before Tehran pedals back on some the “remedial” measures which it has taken in response to the other sides’ non-compliance.

“Well, this is a very logical and reasonable position by Iran and everybody understands by reason that the US has left the table. The US has left the JCPOA and they have to come back first. They should lift their sanctions and become again a participant to the JCPOA, then, Iran would follow and go back to full compliance,” he said, referring to the Joint Comprehensive Plan of Action by its initials.

“This is actually a concept that almost everybody agreed on. We need to somehow identify how this is going to happen, but before we come to that point now we are working on the measures that both sides should take. Once we have done with this and once we know exactly what the US should do and what Iran should do, then we have to work on the question of sequence of verification,” Araqchi added.

Asked about the kind of sanctions relief, the Iranian deputy foreign minister said, “We know we have to go back to the same model in the JCPOA. They are sanctions which should be terminated and the US president has the authority to terminate them. So, they should obviously be terminated through executive orders. “

“For the sanctions that are the result of Congress legislation, the (US) president could only waive. This has been mentioned in the JCPOA. So, we want all those sanctions be reversed… Whatever imposed, re-imposed or re-labeled during the Trump administration and whatever is mentioned in the JCPOA should be lifted and they should reverse whatever has been done and I think the Americans know best how to do that.”

Iran’s top negotiator, however, said the discussion is going on.

“We are now in a position to have a better understanding of each other’s position. As I said we have a long way to go. We are not still in a position to say what the measures should be taken exactly by both sides. But, we are moving on that direction. Our demands are clear and we insist on that. Let’s see what happens in the next rounds.”