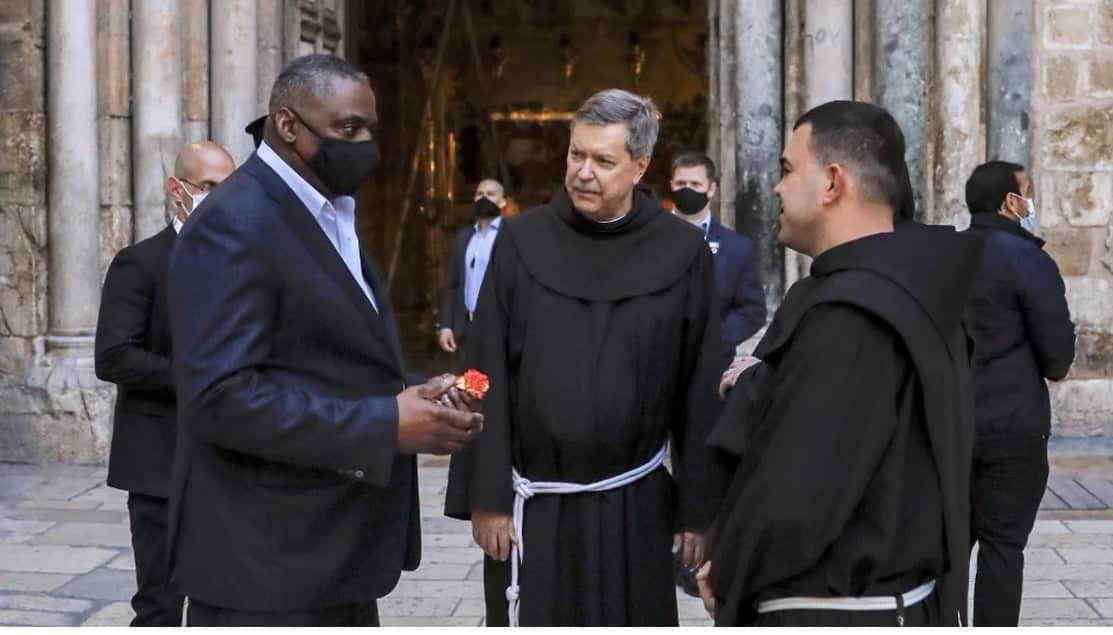 Kommersant.ru: Pentagon chief Lloyd Austin arrived in Israel for a two-day visit. This is the first visit to the Jewish state by a high-ranking official of the US presidential administration, Joe Biden. The talks are taking place against the backdrop of changes in Washington’s foreign policy priorities in the Middle East. Including, to the displeasure of Israel, the United States resumed negotiations with Iran over the “nuclear deal”. The Israelis promise to do everything so that Tehran does not threaten their security. It is possible that the result of their efforts was the accident at the Iranian nuclear facility in Natanz, which the Iranian authorities called a terrorist attack.

The administration of US President Joe Biden is firmly committed to the security of Israel and believes that relations with that country are central to American policy in the Middle East. This was stated by the head of the Pentagon Lloyd Austin during a meeting with his Israeli counterpart Benny Gantz in Jerusalem on Sunday. According to him, Washington will continue to work to ensure Israel’s high-quality military superiority in the region.

General Austin became the first US official to come to Israel since the inauguration of President Joe Biden. The program of the two-day visit includes meetings with Israeli Prime Minister Benjamin Netanyahu, Foreign Minister Gabi Ashkenazi and Chief of General Staff Aviv Kohavi, as well as an excursion to the Nevatim air base and a visit to the Yad Vashem Holocaust Memorial and the Jerusalem Memorial to Fallen Soldiers.

Among the topics of the talks are the prospects for bilateral cooperation and the situation in the Middle East.
In the three months since the arrival of the Biden administration in the White House, Washington has adjusted its policy in the region. President Biden’s plans were known in advance, and this could not but cause concern for Israel. Moreover, Joe Biden himself was in no hurry to talk with Benjamin Netanyahu. Their first telephone conversation took place almost a month after the inauguration of the new US president.

Israel’s main fears are related to the prospect of Washington returning to the “nuclear deal” with Tehran (Joint Comprehensive Action Plan, JCPOA), from which US President Donald Trump decided to withdraw in 2018, while simultaneously imposing sanctions on Iran. In response, Tehran has reduced the number of its commitments under the JCPOA, which has jeopardized the existence of the “nuclear deal.” Lloyd Austin’s visit took place just a few days after the start of the work of the expert groups in Vienna, which should outline the steps necessary for the full return of the United States and Iran to the JCPOA. So far, there is little hope for a successful outcome of the negotiations. Tehran insists on the complete lifting of sanctions. At the same time, as the spokesman for the Iranian Foreign Ministry Said Khatibzade said in an interview with the American television channel CNN, the consultations in Vienna showed that progress on the “nuclear deal” is possible.

Israel considers US plans to return to the “nuclear deal” dangerous. “Today’s Tehran is a strategic threat to international security, the entire Middle East and the State of Israel, and we will work closely with our American allies to ensure that any new agreement with Iran secures the vital interests of the world, the United States will prevent a dangerous arms race in our country. region and protect the State of Israel, ”Beni Gantz said after talks with his colleague. Benjamin Netanyahu spoke in the same spirit a few days ago. “To our best friends, I say – an agreement with Iran that opens the way to nuclear weapons that threaten us with destruction – such an agreement will not bind us. There is only one thing that obliges us – to prevent those who intend to destroy us “,

Lloyd Austin’s visit to Israel coincided with a power distribution accident at a nuclear facility in Iran’s Natanz. The Iranian authorities called the incident a terrorist attack. “Iran condemns this heinous act and reminds the international community and the IAEA of the need to combat such manifestations of nuclear terrorism,” said Ali Akbar Salehi, vice president of the country, head of the Iranian Atomic Energy Organization. He stressed that “Iran reserves the right to retaliate against those responsible.”

The Israeli media, based on previous similar incidents, suggest that Israel carried out a cyberattack on Natanz, and call it part of the “invisible war” between Israel and Iran.

This is the second incident in Natanz in a year. In early July, there was an unexpected fire, which the authorities called “sabotage” and were also looking for an Israeli trail. In addition, it is Israel that is suspected of the recent, not the first attack on an Iranian ship in the Red Sea. Israeli journalists claim Israel warned of the US attack. Given Washington’s continued suspicion of Tehran’s military ambitions and regional influence, it will be beneficial for the United States to continue to contain Iran with the hands of Israel. The Iranian theme will be continued during the upcoming visit of the Israeli Mossad intelligence service director Yossi Cohen to Washington in the coming days. It is assumed that the main purpose of this visit is to prevent the United States from returning to the “nuclear deal”.

The second issue that worries Israel in the new US policy is the resumption of American financial aid to the Palestinians and the restoration of official contacts between Washington and Ramallah . Both were cut short under President Trump. Just on the eve of Lloyd Austin’s visit, it became known that the United States would send aid to the Palestinians in the amount of $ 235 million, of which $ 150 million will go to the United Nations Middle East Agency for Assistance to Palestine Refugees and Organization of Works (UNRWA). “The position of Israel is that the UNRWA organization in its current form perpetuates (Palestinian-Israeli. – “ Kommersant ”) conflict and does not contribute to its resolution.

Therefore, the resumption of assistance to UNRWA must be accompanied by significant and necessary changes in the nature, goals and behavior of this organization, ”the Israeli Foreign Ministry said in a statement in connection with the US decision. In addition, the Israelis can no longer count on Washington’s approval of their settlement activities in the occupied territory. The United States returned to its traditional position that a solution to the Palestinian-Israeli conflict is possible only on the basis of the principle of “two states for two peoples”, taking into account all UN Security Council resolutions, while President Trump proposed alternative options, including territorial concessions of the Palestinians in exchange for financial support.

“It cannot be denied that Israel occupied the West Bank, Gaza, East Jerusalem during the 1967 war. Our position is in a two-state solution, ”the US State Department said in early March, explaining the difference in the positions of the old and new administrations. At the same time, the Biden administration decided not to abandon the decisions made under President Trump – to recognize Jerusalem as the capital of Israel and to move the American embassy there. This gives the Israeli leadership hope that Washington’s statements of commitment to Israel’s security can be trusted.