[ Editor’s note: Stops on major highways are very dangerous. There are usually no witnesses around, or anyone that can even hear the shots and know where they came from.

As Gordon can tell you, in a close distance shootout, especially with well trained people, whoever draws first wins 99% of the time. Survival rests not only on how quick your own draw is, but in spotting a giveaway sign that the other guy is about to pull so you get some adrenalin flowing.

And then there is the not inexpensive prep of bearing the cost of blowing through 500 rounds on the practice range regularly to keep your skills and confidence up that you have the speed, and the first shot will be on the mark so you are not rattled in a bad siuation.

Jarrott made a big mistake. The redneck looked dangerous, and when he asked him to get out he should have instructed him to come around the front. Because he did not the perp was able to screen having his weapon in his right hand and pull it up quickly for the first shot.

Walking around the front with the perp pulling a AR-15 up from his right side would have been more awkward and would have given Jarrott a much better chance.

But walking around to the back is standard procedure. But then with a pickup truck the back was a perfect blind for the shooter having his rifle in is right hand, who could see the Jarrot was not switched on, meaning his right elbow was not up as it would be for a fast defensive shot.

Jarrott of course kept his eyes on the perp all the way, but he was blind as to what Cueva had in his right hand.

At 3:31 you see the prep has already brought his weapon up level to Jarrott’s head, and Jarrott has not even begun to react. It’s game over for him and any other cop who lost that precious half a second.

The reality shock hits him and he reacts by covering his head, right hand going up versus going for his gun. These shooting situations have to be practiced to have a chance at winning. Jarrot tries to retreat to the front of the truck for cover but the big perp is pumped up and very fast

If he had ducked quick enough then the prep would not be sure where the cop would pop up shooting. Then he would be rattled with a big possibility of guessing wrong. Even then its a terrible situation to be playing pop up and shoot with a guy that has an AR-15.

If Jarrott had pulled his gun out sooner as the perp exited toward the back he would have had a chance. This is a sad training video. The only positive part of it was the dirt bag’s minutes were limited and there is one more less of them on the planet

It turns out that Cueva had an extensive violent criminal record as a drug dealer. No doubt, authorities want to know how someone with his history was able to get his hands on an assault weapon. Why didn’t his tag number bring up his history to warn Jarrott?

I just googled the incident more and it came up (from the dashcam) that Jarrott had spotted the weapon, yet after ordering Cueva to exit Jarrott did not pull his gun out to be ready, a fatal mistake unfortunately, leaving three kids behind and one on the way… Jim W. Dean ] 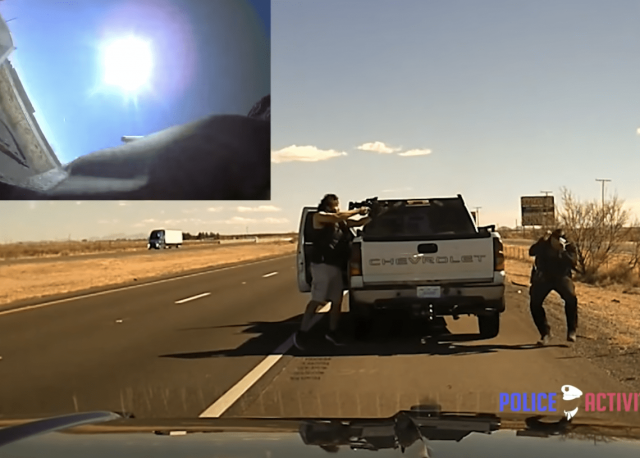 Prior to the pickup coming to a stop, Cueva exited the pickup armed with a firearm and shot multiple rounds towards the officers and deputies. LCPD Officer Adrian De La Garza and DASO Deputies Diego Herrera and Obed Marte returned fire towards Cueva, who was struck several times by gunfire.

Officer De La Garza was struck by gunfire and was airlifted to a trauma hospital in Texas where he was treated and released for non-life-threatening injuries. Officers rendered aid to Cueva until emergency medical personnel arrived on scene. Cueva sustained fatal injuries and was pronounced deceased on scene by the Office of Medical Investigator.

This investigation is active and being led by the New Mexico State Police Investigations Bureau. Officer Darian Jarrott began his career as a Transportation Inspector with NMDPS. He was certified as a law enforcement officer in December of 2014 and worked with the former Motor Transportation Division of NMDPS.

In July of 2015, he was sworn in as a New Mexico State Police officer where he bravely served until the day of the shooting. Officer Jarrott leaves behind 3 small children and was expecting his fourth child this year. Officer Darian Jarrott was laid to rest on Friday, February 12, 2021 at Shakespeare Cemetery in Lordsburg during a private burial.