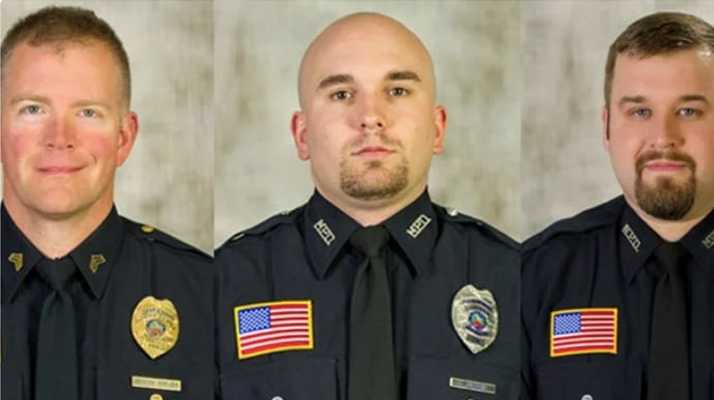 …from CBS4 Indiana, via the Daily Beast

[ Editor’s Note: Local prosecutors picked up a three pack with this crew. Usually a good attorney from one of the victims was key to getting the story out, although that is not in the story below but possibly in the Scrib indictment.

It is unlikely this would be the first time these guys have roughed up arrestees. A good DA, if he had the time and the budget could, go over past arrests, but that can turn into a snake pit with stories being made up by other arrestees to get into the lawsuit lottery.

Witnesses make all the difference in these kinds of cases… Jim W. Dean ]

Winkle is accused of depriving five different arrestees of their right to be free from excessive force and six counts of writing false reports about his use of force. He’s accused of kicking, punching, knee-striking and using a Taser on arrestees without justification, resulting in injuries.

Gibson is charged with two counts of depriving two arrestees of their rights to be free from excessive force, and one count of writing a false report about his use of force against one of them. The indictment alleges that Gibson’s actions included punching, stomping on, and knee-striking arrestees without justification, resulting in injuries.

Krejsa is charged with writing false reports related to two excessive force incidents involving Winkle. The indictment alleges that Krejsa, on one occasion, minimized the level of force used by Winkle during one arrest, and, on another occasion, falsely represented that a different Muncie Police Department sergeant cleared Winkle—even though it was Krejsa who’d conducted the review.

Posey is charged writing a false report related to one of Winkle’s excessive force incidents. Posey misrepresented the arrestee’s behavior, the indictment alleged, and mischaracterized and omitted Winkle’s unlawful use of force during the incident.

Previously, Winkle, Gibson and Krejsa were charged in a 12-count indictment with civil rights and obstruction offenses stemming from five of the six incidents mentioned in the indictment.

The Muncie Police Department released a statement from Chief Nathan Sloan and the department’s administrative team:

Three officers from the Muncie Police Department had previously been indicted on various charges from an on-going federal investigation into incidents that occurred in 2018. An additional officer has been indicted as a result of that investigation.

The information that has been made available to the department at this time is limited, but we will continue to cooperate with federal authorities and provide updates as information becomes available and can be released. The officer that was indicted today has been placed on Administrative Leave, effective immediately, until further determinations can be made about their status during the continued 2018 investigation.

These focal points will remain a priority to ensure that the citizens and/or guests of Muncie are receiving the highest quality police service from policing professionals. These commitments will continue, despite challenges that may arise from previous investigations.