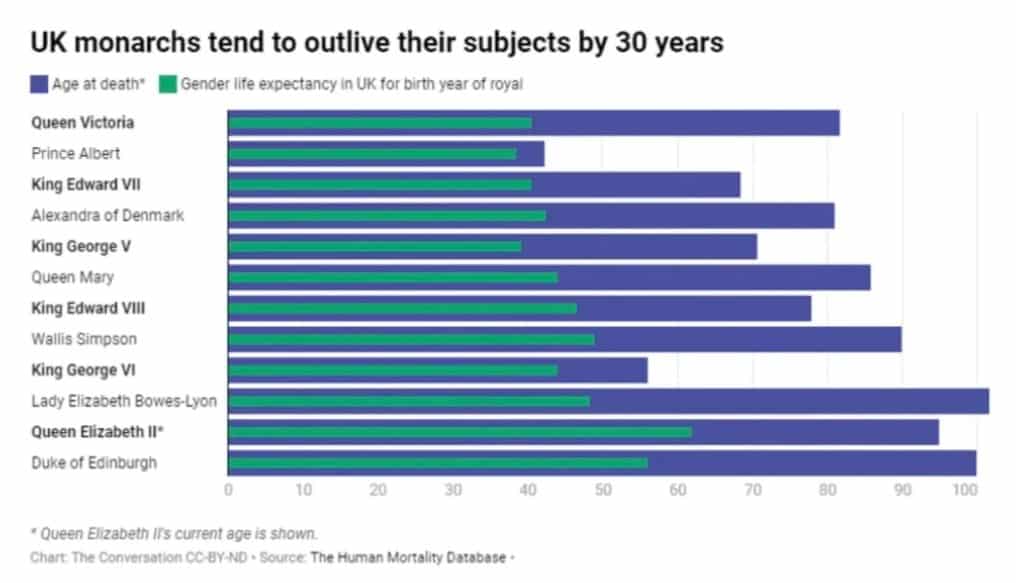 Daily Beast: Reaching such a ripe old age isn’t uncommon among the British ruling family—in fact, my analysis shows that on average they live an additional 30 years compared with their subjects.

I looked at the duration of life of the last six British monarchs, along with the longevity of their spouses and children—in total 27 royals. What it reveals is a fascinating and familiar story for those of us who study aging and longevity for a living. As a professor of epidemiology and biostatistics, I had previously observed the exact same phenomenon among U.S. presidents—they also tend to live decades longer than the general population they serve.

The ruling U.K. monarchs from Queen Victoria onward lived an average of 75 years. And this longevity will continue to rise with each day that Queen Elizabeth II—currently age 95—lives. Their spouses survived even longer, reaching an average age of 83.5 years. If Victoria’s husband Prince Albert, who died of suspected typhoid fever at age 42 in 1861, is removed from the equation, the average duration of the life of the spouses of the monarchs was an astonishing 91.7 years.

By contrast, the average life duration of the wider U.K. population for the years the monarchs were born throughout this period was only 46 years, according to figures from the Human Mortality Database. For example, the typical life expectancy at birth for a female in the U.K. in 1819 was just under 41 years. Queen Victoria, also born in 1819, was 81 when she died. By the time Elizabeth II was born in 1926, life expectancy at birth for females in the U.K. had risen to 62—the queen has already surpassed that by some 33 years.