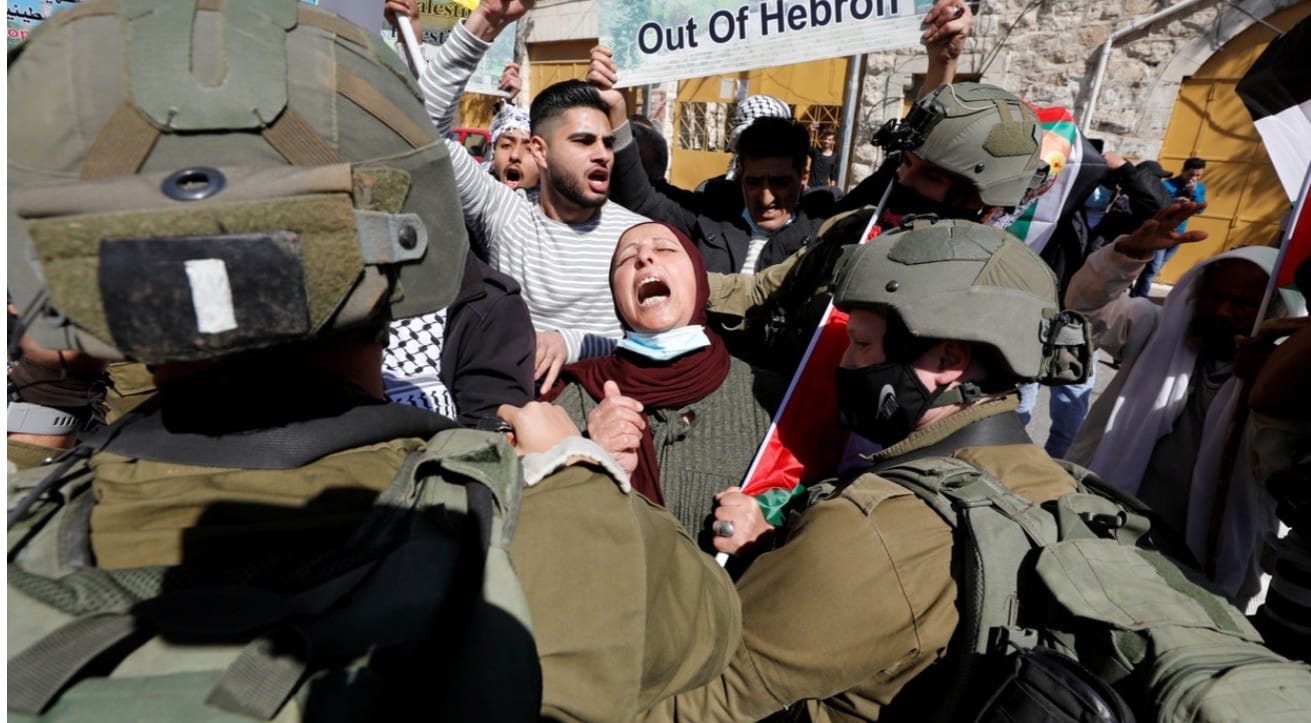 Imagine outrage & calls for sanctions if any other state did it

Eva Bartlett is a Canadian independent journalist and activist. She has spent years on the ground covering conflict zones in the Middle East, especially in Syria and Palestine (where she lived for nearly four years). Follow her on Twitter @EvaKBartlett

RT/Moscow: Every aspect of their existence on occupied Palestinian land is illegal. Still, the violence perpetrated by Israeli settlers against civilians continues, propped up by Israel’s legal system and the world’s blind eyes.

Periodically, we will hear in the news something about the illegal colonies (settlements), but increasingly rarely over the years, and generally without a human face: just numbers and false promises to end the expansion of these colonies choking Palestinians from their land.

Recently, UN Special Rapporteurs and experts shed light on the uptick of brutality and land theft by Israeli colonists. In a new UN report, they noted:

“In 2020, the United Nations Office for the Coordination of Humanitarian Affairs (OCHA) documented 771 incidents of settler violence causing injury to 133 Palestinians and damaging 9,646 trees and 184 vehicles mostly in the areas of Hebron, Jerusalem, Nablus and Ramallah. Already, during the first three months of 2021, more than 210 settler violent incidents were recorded, with one Palestinian fatality.”

Stop for a moment and imagine this was a report on violent incidents by Russia, Syria, Venezuela, or any of the nations in NATO’s crosshairs. Media would be howling with outrage and faked tears, with demands for heads to roll, or at least for perpetrators to face justice.

But this is occupied Palestine, where the Israeli legal system serves continued colonist expansion and terrorism against Palestinians. And, let’s be clear, what the colonists do to Palestinians is indeed terrorism.

Colonists have burned alive a Palestinian youth, shot and killed Palestinian civilians, have run people over, including children, leaving them to die. They routinely attack farmers trying to work their land or harvest their olives.

They hail stones, large rocks, sewage and waste onto Palestinians walking or living below their illegally occupied homes, steal Palestinians’ flocks of sheep (or poison them), even uproot and thieve their olive trees.

This has been going on for decades, and the so-called international community allows it, in spite of overwhelming documentation of these crimes.

Israeli rights group B’Tselem has been reporting on such attacks since 1989. A 2017 B’Tselem article noted:

“Thousands of testimonies, videos and reports, as well as many years of close monitoring by B’Tselem and other organizations, reveal that Israeli security forces not only allow settlers to harm Palestinians and their property as a matter of course – they often provide the perpetrators escort and back-up. In some cases, they even join in on the attack.

After more than 25 years of this work, there is no escaping the conclusion that the authorities merely make a show of law enforcement in this context and that, with few exceptions, they have no interest in seriously investigating settler violence against Palestinians.”

In 2007, I witnessed and heard of colonist violence and land theft when I spent eight months in the West Bank as an activist documenting the crimes against Palestinian civilians by both the Israeli military and the illegal colonists.

The city of Hebron has some of the most violent squatters, who, like colonists all over the West Bank, walk with guns slung over their back and routinely attack and abuse the Palestinian residents, including children.

In fact, during my two-week stay in Hebron in mid 2007, one of the things I and other activists did was simply to stand on shara Shuhada, the once vibrant main street, now a shuttered ghost town.

We stood, or sat, on that street for hours, in the heat of the day, to deter colonists from attacking children going to or from school, or adults going to market, work or mosque. It seemed a colossal waste of time, but there had been many precedents of Israeli colonists stoning or beating Palestinians.

South of Hebron, in a desert-like hamlet called Susiya, over the course of many months I stayed in the makeshift tent and metal structures of the Palestinians living there. Prior to their shantytown, they, and generations before them, had lived in stone houses and even cave dwellings. But, they were evicted in the 1980s, when Israel declared the area an archaeological site.

As I wrote, “We stayed with them in hopes of preventing the inevitable attacks by the nearby colonists. Hajj Khalil, an elder in his eighties, had been brutally beaten by colonists the year before I met him.”

“Settler violence was predominantly ideologically motivated and primarily designed to take over land but also to intimidate and terrorize Palestinians. The violence and intimidation often prevents Palestinians from accessing and cultivating their land, and creates a coercive environment pressuring Palestinians to stay away from certain areas or even move.”

Indeed, in the Susiya region, I witnessed land being stolen and quickly annexed by the illegal Jewish colonists.

As I wrote, “The elderly Palestinian landowners have been harassed and threatened, and physically abused. They have been moved off of the land by menacing of the illegal colonists. The owners of the land very much want to use it for agricultural purposes and have tried–mostly unsuccessfully–to file complaints at the nearest police station, Kiryat Arba, nearly two hours away. These illegal tactics have been largely successful in the region, with many Susiya residents and landowners leaving their land for nearby cities and towns.”

During the olive harvest that year, I accompanied Palestinian farmers to their orchards in a northern West Bank region. Not long after they had begun collecting olives, six masked colonists descended a hill, slinging hefty stones at us, for forty minutes stoning and then physically hitting people in our group.

I wrote about that at the time, noting, “One of the six attackers slung a large rock at me. Hitting my camera hand, the rock missed my temple. One of the farmers, on the other hand, was not so fortunate, with severe gashes on his head from multiple stone strikes.”

On another occasion, the Palestinians had the needed paperwork to be on their land (that’s right, they have to ask their occupiers for permission to access their land for limited amounts of time, to harvest their olives), and had only just begun to harvest when gun-toting colonists dressed in white descended the hill and began menacing the Palestinians.

What did the Israeli army do? Point their guns at the farmers and tell them to take a hike. Get off their land. The setters have spoken…

There are far worse examples. My encounters and documentation at the time was more on the crimes of the Israeli army against Palestinians. But, B’Tselem has pages of reports and videos of Israeli colonists’ attacks on Palestinians.

In 2015, Haaretz reported colonists had “firebombed” a West Bank house, the ensuing fire burning to death an infant.

The youth I mentioned earlier, Mohammed Abu Khdeir, was indeed burned alive by Israelis, in mid-2014. As I wrote some years ago, “Khdeir went missing while going to mosque for morning prayers in occupied Jerusalem. His slight body was found a few hours later charred and beaten. The autopsy report “showed soot in the victim’s lungs and respiratory tract, indicating he was alive and breathing while he was being burnt.”

In a rare instance of justice, the colonist was sent to prison for life for his crime.

According to their research, “Israeli Police failed in the investigation of 82% of the files opened between 2005 and 2019. 91% of all investigation files were closed without an indictment. After 15 years of monitoring Israeli law enforcement authorities in their handling of complaints filed by Palestinian victims of ideological crimes committed by Israelis, the picture that emerges demonstrates that the State of Israel is failing in its duty to protect Palestinians in the occupied territories from those who would harm them and, in fact, leaves them defenseless as they face assault and harassment.”

In their 2017 report, B’Tselem further noted, “Violent actions of settlers against Palestinians are not exceptions to a rule. Rather, they form part of a broader strategy in which the state colludes, as it stands to benefit from the result. Over time, this unchecked violence is gradually driving Palestinians from more and more locations in the West Bank, making it easier for the state to take over land and resources.”

That is the essence: the crimes of Israel’s colonists actually benefit Israel in occupying more and more Palestinian land. So there is incentive to look away, close investigations, let the attacks and murders continue.

In researching for this article I came across yet another account of colonists beating a Susiya resident I knew. The article described an attack in December 2020 on 78 year-old Khalil Haraini. In which, “about 10 settlers rushed out from behind a hill, armed with pistols, rifles, clubs, axes and iron chains. One of them assaulted the elderly farmer, knocking him to the ground. Settlers then beat him with their clubs.”

Although I’m not naive enough to believe anything will change after a UN report here or there, I feel the need to write about it still, 13 years after meeting people like Khalil Haraini or the farmers I accompanied.

Their hell continues and, tragically, no one is going to rein in the terrorists known as Israeli settlers.