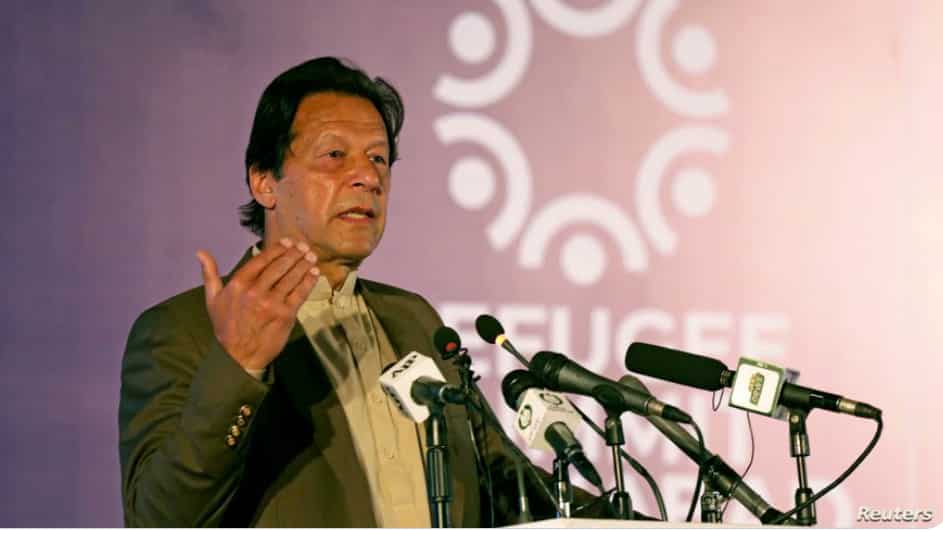 RT/Moscow: Pakistani Prime Minister Imran Khan has urged Western nations to prosecute hatred against Muslims with the “same standards” it applies to Holocaust denial, amid a wave of anti-French riots in his own country.
Supporters of the Tehreek-e-Labaik Pakistan (TLP) Islamist hold a protest in Lahore, Pakistan, April 6, 2021. © Reuters / Stringer
–

Writing on Twitter, Khan urged Western governments “who have outlawed any negative comment on the Holocaust to use the same standards to penalize those deliberately spreading their message of hate against Muslims by abusing our Prophet.”

The PM blasted “extreme right politicians” in the West who spread hatred against Muslims “under [the] guise of freedom of speech.”

Khan’s remarks came after his government banned hardline Islamist party Tehreek-e-Lebbaik Pakistan (TLP) on Thursday for inciting anti-French riots across the country. A statement from the Pakistani government said that TLP was engaging in terrorism, disturbing the peace and “creating anarchy.” TLP leader Saad Rizvi was arrested.

Pakistani newspaper Dawn quoted Interior Minister Sheikh Rashid as saying that at least 580 police officers were injured in clashes with protesters this month and dozens of vehicles were destroyed. Earlier reports said that several people, including two officers, were killed in the riots.

The protests erupted after French President Emmanuel Macron took a hard stance on defending the nation’s secularism. He argued that the right to publish cartoons and caricatures of Mohammed – which is considered blasphemous in Islam – is protected under the freedom of speech.

At the same time, Holocaust denial in France was made illegal in 1990 under the so-called Gayssot Act.

The French government initiated a crackdown on mosques and Muslim groups that were deemed radical after a string of terrorist attacks last year, including the murder of a school teacher who showed a cartoon of Mohammed during a lesson on freedom of expression.

On Thursday, the French embassy in Pakistan advised French nationals and companies to leave the country, citing safety concerns.