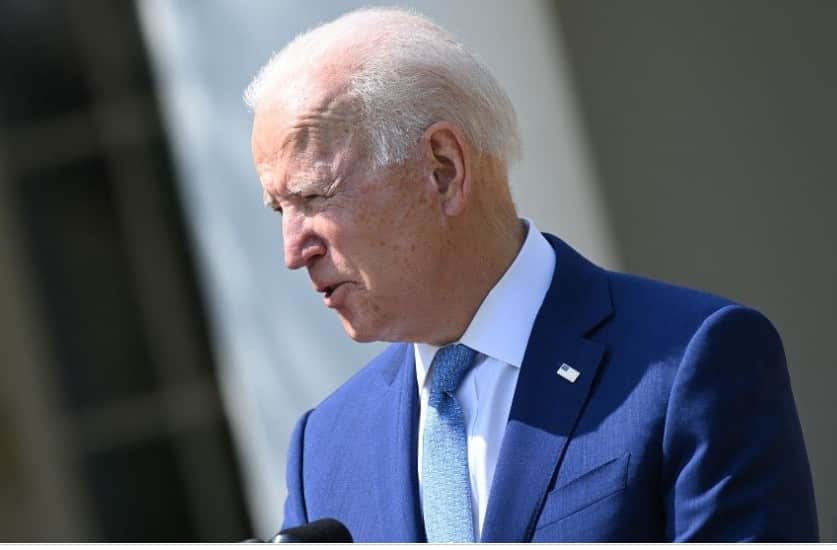 US President Joe Biden announced on April 14, this year that he will begin withdrawing US troops from Afghanistan from May 1, setting a deadline for unconditional withdrawal of all 2,500 US troops in Afghanistan by September 11 to end America’s longest war.

Following President Biden’s decision, other NATO allies also agreed to start withdrawing their forces from Afghanistan by May 1.

NATO Secretary General Jens Stoltenberg stated that the allies “went into Afghanistan together…we are united in leaving together…This is not an easy decision and it entails risks.”

Republicans and some Democrats said that it could embolden the Taliban, while others in his party stated that it is time to end the forever war. US Secretary of State Antony Blinken defended President Biden’s pledge to withdraw troops from Afghanistan and said:

“We went to Afghanistan 20 years ago, and we went because we were attacked on 9/11…we achieved the objectives that we set out to achieve.” However, Blinken’s statement is quite contrary to the facts that US faced defeat in Afghanistan.

Nevertheless, President Biden’s withdrawal decision has rejected all calls of some top American and Western officials to keep forces in Afghanistan and to help resolve that nation’s internal conflict by advancing the Afghan peace process, intra-Afghan dialogue etc.

“President Biden’s promise to remove U.S. troops from Afghanistan by Sept. 11 is to end America’s longest war…two decades have seen more than 2,300 US military lives lost, tens of thousands of U.S. wounded, countless Afghan casualties and more than $2 trillion in taxpayer money spent…The stated goal of the U.S. involvement is not to end that regime…the U.S. goal in Afghanistan is to keep it from again becoming a hotbed for terror groups like al Qaeda. When the U.S. left Iraq, the power vacuum helped lead to the rise of ISIS there. Biden said that no amount of U.S. forces can deter the Taliban or end the war…The U.S. will still use diplomatic and monetary leverage.

What’s not at all clear is if those tools will get results where American military might have not…Senator Jeanne Shaheen, a Democrat tweeted Biden’s plans…undermines our commitment to the Afghan people…While the U.S. will continue to try to broker a peace agreement between the Afghan government and the Taliban, September may now be the de facto deadline for those talks…the Taliban is moving closer to a military victory, but that it may be reluctant to take over as a pariah government, which could result in a loss of international support and financial aid for the country. The war in Afghanistan shattered Biden’s faith in American military power…the Afghan security forces will splinter and that Afghanistan will be plunged into civil war, with northern warlords resisting the Taliban’s advance just as they did in the late 1990s.”

In this respect, Council of Foreign Relations-an independent, organisation of think tanks said:

“A complete U.S, military withdrawal comes with major risks: the Taliban could expand its control over Afghanistan, and the ongoing peace process between the group and the Afghan government could collapse…The Taliban has zero incentive to compromise now that U.S. troops are leaving.”

According to the Wall Street Journal:

“The move to withdraw U.S. forces without conditions also marks a departure from the Trump administration’s deal last year with the Taliban in Doha, Qatar…That agreement required…a U.S. pledge to leave by May 1. The Taliban have said American forces would be legitimate targets if the U.S. stays beyond that deadline.”

Biden’s decision came as Turkey said that it will host a US-backed peace conference on April 24, 2021, which would bring together the Afghan government, the Taliban and international partners. But, spokesman for the Taliban office in Qatar Mohammad Naeem clarified that Taliban would not participate in the conference until all foreign forces completely withdraw in accordance with the US-Taliban agreement signed in Doha on February 29, 2020.

Besides, the transition in Afghanistan depends heavily on the peace talks between the Afghan government and Taliban. The two sides had yet to agree on an agenda, and violence spiked as the talks have stalled.

The Afghan government negotiating team is also plagued by divisions between Afghan President Ashraf Ghani and his main rival Abdullah Abdullah-Chairperson of Afghanistan’s High Council for National Reconciliation, who supervised the government’s talks with the Taliban in Doha.

Recently, Afghan president Ghani ensured after a phone call with Biden that his forces are fully capable of controlling the country, and Biden replied that Washington will continue to support the Afghan government and coalition-trained security forces. But, ground realities would be quite different.

Question arises, if well-equipped Nato forces failed in coping with stiff resistance of the Taliban as to how government troops will succeed.

Earlier, Special Representative for Afghan Reconciliation Ambassador Zalmay Khalilzad Zalmay Khalilzad met with the Taliban leader Abdul Ghani Baradar in Qatar, held talks with Afghan leaders in Kabul, including President Ghani and Abdullah Abdullah to revive a peace process faced with mounting violence and a US troop withdrawal deadline of May 1.

It is mentionable that Abdullah Abdullah visited Pakistan on September 28, 2020. In the joint conference with Foreign Minister Shah Mahmood Qureshi, he stated that Afghanistan would never “allow its soil to be used by extremist forces, posing a threat to any other nation” and favoured the start of intra-Afghan talks.

Nevertheless, this statement was Abdullah’s double game. For instance, ignoring the fact that India is destabilising Afghanistan and Pakistan, during his trip to New Delhi, he said on October 10, last year that in the meeting with the PM Modi, he discussed Kabul’s talks with Taliban and emphasised India’s role in the process.

In fact, New Delhi and Afghan rulers who are creating obstacles in the Afghan reconciliation plan are manipulating the dual policy of America against Pakistan, China, Russia and Iran.

In this context, the then NATO commander, Gen. McChrystal had pointed out:

“Indian embassy and consulates in Afghanistan have become a hub of terror sponsorship against Pakistan…An amount of US$5 million has been given to the Balochistan Liberation Army and the Balochistan Liberation Front…India raised a 700-strong militia to sabotage CPEC [China-Pakistan Economic Corridor]…We have apprehended a RAW-sponsored sleeper cell in Karachi, which wants to create unrest in the country…India united Tehreek-e-Taliban Pakistan [TTP] with banned dissident [Terror] organizations…Indian intelligence agencies are also trying to establish Daesh-e-Pakistan…has recently shifted 30 terrorists of Daesh to Pakistan.”

And Pakistan’s Ambassador to the UN Munir Akram handed over the dossier to the UN Secretary General Antonio Guterres on India’s campaign to promote terrorism in Pakistan and the entire region.

RAW is also using terrorists of ISIS which claimed responsibility for a number of terrorism-related assaults and sectarian attacks in Pakistan and Afghanistan.

Notably, on the same day, ahead of President Biden’s pullout plan from Afghanistan, Pakistan’s Chief of Army Staff General Qamar Javed Bajwa and US Secretary of State Antony Blinken held a telephonic conversation—Gen. Bajwa and Blinken discussed the Pakistan-brokered Afghan peace process and bilateral cooperation in various fields. Gen. Bajwa said that Pakistan will always support an Afghan-led and Afghan-owned peace process based on the mutual consensus of all stakeholders. Blinken also acknowledged Pakistan’s continuous efforts for peace and stability in the region and pledged to further enhance bilateral relations, as the ISPR statement said.

Next day, Gen. Bajwa also talked to Mrs Angela Ageler, US Charge d’ Affairs to Pakistan at the GHQ. Gen. Bajwa reiterated that a prosperous, stable and peaceful Afghanistan is in the best interest of Pakistan in particular and region in general.

While, Foreign Minister Qureshi repeatedly said: “The world is watching that India is destroying the regional peace and playing its role as spoiler in Afghan peace process.”

Now, with the proposed withdrawal of the US-Nato forces from Afghanistan, Indian worries have been increased, as New Delhi has been supporting the Northern Alliance and the Afghan rulers. In this respect, recently, Indian chief of the defence staff General Bipin Rawat stated that after the withdrawal of foreign troops from Afghanistan.

India’s big worry is that instability in Afghanistan could spill over into its Muslim-majority territory of Kashmir where it has been fighting militants for three decades—Pakistan will gain a bigger hand in Afghanistan. India invested $3 billion in Afghanistan on roads, power stations and even built its parliament following the ousting of the Taliban in 2001.

Nonetheless, in case, the US-led NATO forces withdraw from Afghanistan, Afghan regime will fall like a house of cards owing to the assaults of the Taliban. Even, India which has invested $3 billion in Afghanistan’s various fields, would not be in a position to maintain its investments due to the successful guerrilla warfare of the Taliban who will also eliminate RAW’s anti-Pakistan network.

As without bothering for dire consequences, President Joe Biden has taken a u-turn regarding Afghanistan, therefore, in his speech, he also stated that he will ask other countries especially Pakistan, as well as Russia, China, India and Turkey to support Afghanistan. He excluded Iran which also wants peace and stability in Afghanistan.

During a telephone call, Afghan Foreign Minister Hanif Atmar and Iranian Foreign Minister Dr. Javad Zarif exchanged views on developments in the peace process. Zarif hailed the American president’s announcement of a complete troop pullout from the country, and renewed Iran’s stout support for the Afghan peace drive. Atmar voiced his pleasure with the growing relations between the neighbours and commended Tehran’s role in the Afghan peace process.

In a statement, a top White House official said on Sunday (April 18, 2021) that no one can offer guarantees about Afghanistan’s future after US troops leave, even as he stressed the United States would stay focused on terrorist threats emanating from the country.