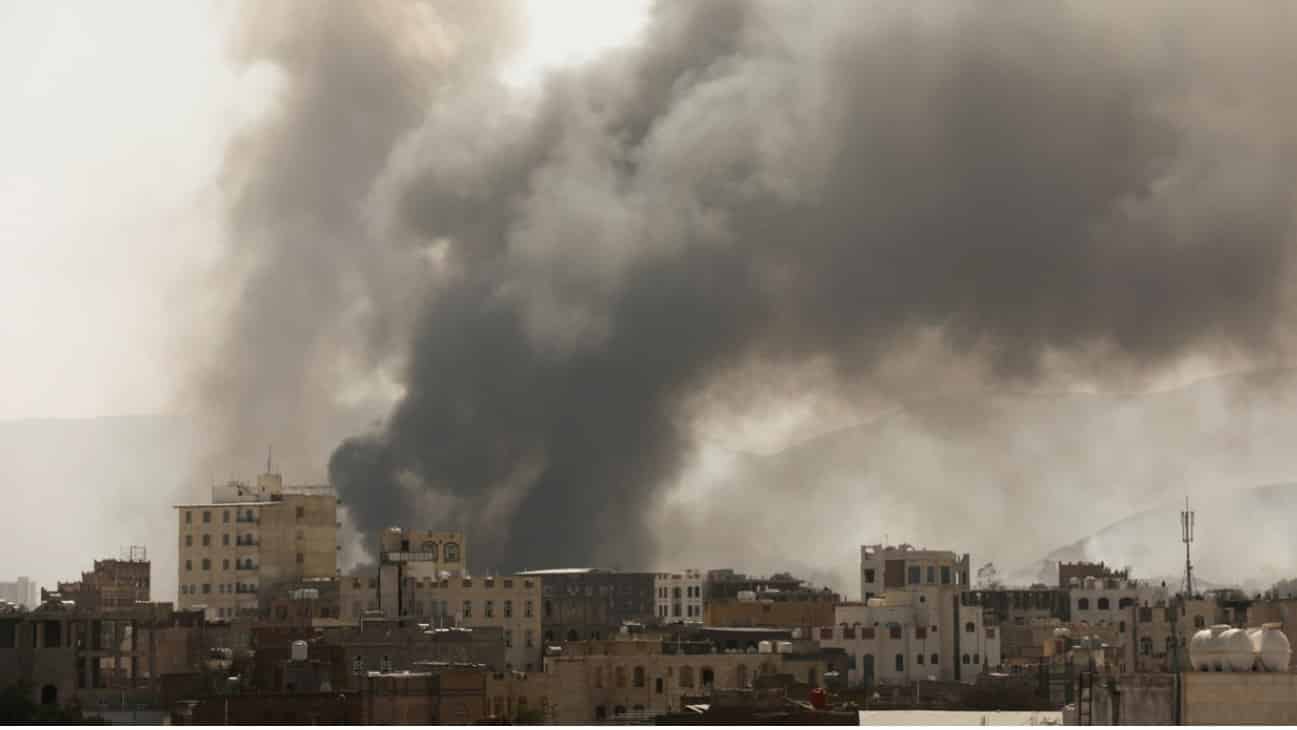 By Kevin Karp, commentator, screenwriter, and former political adviser in the House of Commons and the European Parliament. As an EU adviser based in Brussels and Strasbourg, he specialized in international trade, European populism, and Brexit. Find his website at moon-vine-media.com.

RT/Moscow: The bloody conflict continues to rage in Yemen with a new flashpoint erupting between Houthi rebels and a Saudi-led coalition on Monday, after Houthi drones hit Aramco refineries at Jeddah and Jubail.

According to Houthi military spokesman Yahya Saree, the attacks were part of a night raid of 10 drones that also struck “sensitive military areas” in the southern part of Saudi Arabia.

The Houthi attacks on Saudi oil facilities proceeded in parallel with a renewed Houthi offensive to take control of Yemen’s oil-rich Marib region, the last northern stronghold of Saudi occupiers, in their six-year war against the Houthis on behalf of deposed Yemeni President Abdrabuh Mansour Hadi.

These recent Houthi assaults serve as emphatic rejection of a presumptuous Saudi ceasefire initiative presented to them on March 22, in which Saudi Arabia’s Minister of Foreign Affairs Prince Faisal bin Farhan piously affirmed his regime’s “total rejection of Iranian interference in the region and Yemen” and claimed “the Iranian regime’s support for the Houthi militias […] remains the main reason for the prolonging of the Yemeni crisis.”

No mention was made of the facts that a Saudi invasion, not Iranian meddling, began this war, which has led to what has been assessed as the world’s worst humanitarian crisis, in 2015; that the Saudi occupiers, who receive at least 70% of their weapons from their chief strategic partner, the US, have killed thousands of Yemeni civilians; that while Houthi missile strikes have mainly targeted Saudi military installations and oil infrastructure, the Saudis and their invasion partners have indiscriminately attacked civilians, partially or completely destroying over 500 healthcare facilities and bombing over 100 ambulances, even as the Covid-19 pandemic has ravaged the country.

But the Houthi moves also point to the simpler, more-sinister reason why this war has turned so violent: Riyadh’s petroleum politics, designed to put Yemen under oil vassalage to the House of Saud.

Also contained in Prince Faisal’s proposal was a demand that the Saudi government access a large portion of revenues generated by Yemen’s oil- and natural-gas deposits in Marib. The Houthi resistance was swift in condemning this resource grab: The movement’s leader Abdul Malik al Houthi said that “Access to oil products, food, medical and basic materials is a human and legal right that cannot be bartered in return for military and political extortion.”

Though Yemen is rich in hydrocarbons, Saudi Arabia has repeatedly thwarted the country’s attempts to exploit those resources fully, keeping Yemen in a state of resource bondage since the 1970s that has only intensified with the ongoing war.

Several months before he was ousted by the Houthis in January 2015, Yemen’s Saudi-aligned President Hadi met with Christophe de Margerie, CEO of French oil major Total, to discuss expanded operations for the company in Yemen.

Three years later, with the Saudis having invaded and occupied Yemen’s northern and eastern oil-producing regions, Yemeni economic expert Mohammad Abdolrahman Sharafeddin revealed that the Saudis, in collaboration with Total, had built an oil-extraction installation in the Kharkhir region close to the Saudi border. From here, 63% of Yemen’s crude production was “being stolen by Saudi Arabia in cooperation with Mansour Hadi, the fugitive Yemeni president, and his mercenaries.” It was no coincidence that the string of Saudi military bases and checkpoints built along an area of occupation in east Yemen“were built in oil-rich areas,” according to comments made by resident Ahmed Balhaf in 2019.

The reported outright theft of Yemeni oil reserves in the Marib, Shabwa, Hadremout, and al-Mahrah provinces by Saudi and UAE forces has been rampant since hostilities began in 2015, with a group of economists and officials estimating that as much as 65% of Yemen’s entire crude production from 2015 to 2020 has been stolen by coalition members and foreign oil companies aligned with the Hadi government in exile. Before Saudi troops invaded in 2015 and shut down most of the country’s oilfields, Yemen was producing more than 300,000 barrels of oil per month – a figure that has plummeted to 70,000 over the course of the war. The oil revenue Yemen has lost as a result of Saudi actions has been estimated at $6 billion.

In the escalating quid pro quo, the Houthis have designed their retaliatory measures to disrupt oil production in Saudi Arabia. September 2019 saw two enormous Aramco facilities at Abqaiq and Khurais severely damaged by Houthi attacks, which halved Saudi oil output for several days and cost Riyadh billions of dollars in lost revenue. That same month, the Saudis began construction on a pipeline in the eastern Yemeni region of al-Mahrah that would unload oil at Mukalla on the Arabian Sea. If completed this pipeline would bypass both the Bab-el-Mandeb Strait between Houthi-dominated west Yemen and Djibouti, as well as the Iran-controlled Strait of Hormuz.

ALSO ON RT.COMKarin Kneissl: Jordan’s royal dynasty is volatile, but it’s a matter for Jordanians to solve themselves

The breach of Yemeni sovereignty and civilian deaths in bombing raids are seen as necessary means to the end of having an oil-transit route that is totally outside the orbit of Iran or its Houthi allies, even though Saudi Arabia already exports millions of barrels per day through the Strait of Hormuz, making it the largest oil exporter via that corridor.

Saudi Arabia’s theft of Yemeni oil may even have caused disruptions on global markets. Oil engineers and tanker-truck drivers on the ground reported a drastic increase in oil movements from Yemen into Saudi Arabia in March 2020, which was the height of the Saudi-Russian oil-price war that sent Brent crude down to $30 from an earlier high of $75 per barrel. If, as seems likely, Saudi leaders put some of that stolen oil onto the international market, that could be to blame for the subsequent price dip and massive losses by US shale producers.

Oklahoma Senator James Inhofe, who was part of a group of 14 Republican senators calling on then-US president Donald Trump to cut military involvement in the Saudi fight, remarked that the Saudi monarchy “must be accountable for their actions that have significant impact on our energy markets.”

Prince Faisal’s remarks in March as part of the rejected Saudi peace initiative, claiming that “the systematic attacks carried out by the Iranian-backed Houthi militia […] target the core of the global economy and its supplies, as well as global energy security” sounded like a deflection of blame from Riyadh’s own role in oil-market disruptions.

The aims of the opposing sides over what to do with Yemen’s oil diverge completely. That divergence has ignited the war and defined its implications, even if Riyadh and Tehran have also been using it to fight for regional dominance by proxy.

Saudi rulers are bent on using the specter of Iranian influence as a pretext to pilfer Yemen’s immense hydrocarbon wealth for themselves – and the profits from the over 100 million barrels of Yemeni crude oil have gone into Saudi bank accounts, not into Yemen’s reconstruction. Meanwhile, Ansar Allah – the political arm of the Houthi movement – seeks to recapture Yemeni oilfields to meet the fuel needs of the Yemeni people, who are suffering not only Saudi-sanctioned theft of their domestic fuel, but are also languishing under a Saudi blockade of Yemeni ports that has prevented maritime fuel deliveries from abroad, despite the carrier ships having UN permits.

Through this lens, Houthi retaliatory measures targeting Saudi oil production appear as proportionate responses to repeated Saudi attempts to impose oil serfdom on Yemen. Repatriating occupied oilfields has become the Houthis’ key to gaining sovereign authority. The Houthis have already taken possession of al-Jawf province, which holds the majority of Yemeni oil reserves, and if oil-producing Marib were to come under their control, the next probable Houthi objective would be Saudi-occupied Shabwa, rich in natural gas.

Now facing complete defeat, the Saudi forces’ only game is to slow down the Houthi advance with peace offers, while continuing to take the oil.

At a UN foreign-aid conference in March, the Saudi pledge of $430 million for Yemen looked meaningless next to the $100 billion Riyadh has already spent on the war itself. Without the Saudi invasion, theft of domestic Yemeni oil, and blockade of Houthi-controlled areas – comprising 80% of the entire Yemeni population, 80% of which absolutely requires aid as a matter of survival – Yemen’s need for foreign assistance (including oil-based fuel) would be minimal or perhaps even nonexistent.

But as the Houthi offensive gathers pace and rolls up Saudi positions in oil-rich areas that coalition forces have plundered for years, Washington is still going to bat for its disgraced ally. Timothy Lenderking, Joe Biden’s special envoy for Yemen, arrived in Berlin on Tuesday to seek, as part of a ceasefire, “an immediate end to the offensive in Marib” – meaning, a last-ditch attempt to save the retreating Saudi forces from a further Houthi reckoning.

ALSO ON RT.COMPope calls for end to war, violence, and ‘race for new weaponry’ in Easter message

Nor is the US refraining from the highly lucrative business of arming the oil-soaked belligerents, despite Biden’s pledge two months ago to stop support for “offensive operations in the war in Yemen, including relevant arms sales.” The same day that Lenderking began talks in Berlin, the Biden Administration approved a package arms deal for $23 billion with the UAE, Riyadh’s main accomplice in the Yemen invasion.

Among all the sides wrangling in this quagmire, the Houthis have the only real defensible objectives. Thanks to Saudi Arabia’s desire for Yemen’s oil, Houthi forces have committed to taking that oil back and putting it under sovereign control. The people of Yemen can only hope the Houthis will use it to help end their crises, instead of profiting from them as their enemies have done.