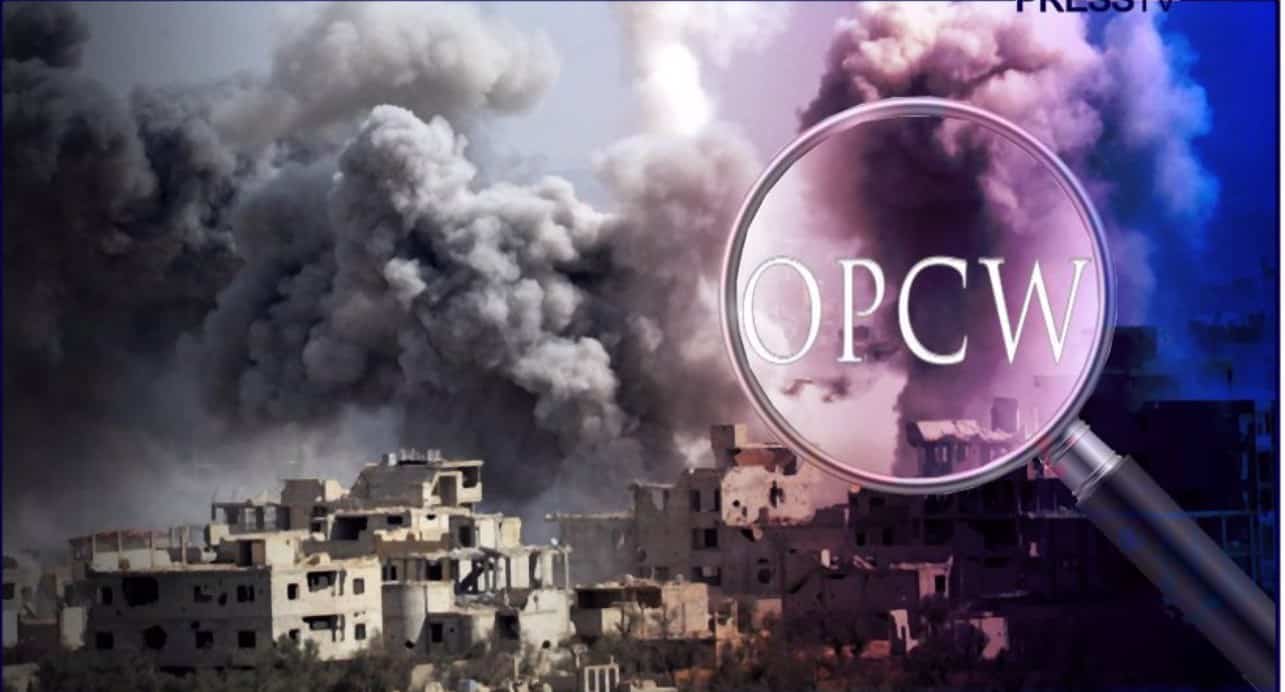 It has now over just over three years since the alleged chemical weapon attack in Douma, Syria, when at least 50 civilians were reportedly killed; an attack which was swiftly followed by retaliatory air strikes against the Syrian government by the US, UK and France.

The alleged attack, supposedly involving two chlorine cylinders dropped from a Syrian Air Force helicopter, was deeply controversial right from the start. Even at the time experienced military officials questioned whether it was likely the Syrian government would choose to carry out such an attack at a point when it was on the cusp of a military victory.

But it was the subsequent investigation led by the Organization for the Prohibition of Chemical Weapons (OPCW) into the alleged attack that now stands at the center of a crisis which goes straight to the heart of profound questions regarding the independence and neutrality of major international institutions tasked with ensuring international peace and security.

Almost as soon at the OPCW’s final report was issued in March 2019, claiming that there were ‘reasonable grounds’ to conclude a chemical attack had occurred, a series of leaks started suggesting that the OPCW Fact Finding Mission (FFM) on Douma had been manipulated in order to reach a pre-ordained conclusion.

We learned that an engineering assessment, coordinated by one of the Douma FFM team members, did not support the conclusions of the official report which stated  that the cylinders had been  dropped from the air, the clear implication being that it was from a Syrian Air Force helicopter.

Senior management at the OPCW rejected attempts to have these findings included in the final report. In late 2019, testimony from an OPCW person involved in the Douma investigation at a Courage Foundation panel as well as further leaks confirmed that chemistry results supposedly indicating the presence of chlorine gas were at best incomplete, witness testimony contradicting the chemical attack narrative had been obfuscated whilst a toxicology report ruling out chlorine gas as the cause of death had been suppressed.

The Courage Foundation panel, and a subsequent open letter, called on the OPCW to allow all of the Douma inspectors to be heard.

We also learned that the manipulation and suppression of scientific evidence was achieved through remarkably bold acts of scientific sabotage: The original interim report, written by the Douma inspectors, which concluded there was no evidence of a chemical attack, was secretly altered in an attempt to publish a bogus report in which it made unsupported claims that chlorine had been used.

After this act of subterfuge was discovered by one of the Douma team, OPCW senior management saw fit to allow a three-person US delegation to meet with the Douma team, in violation of the Chemical Weapon Convention that prohibits such blatant attempts to influence investigations, and tell them that the Syrian government had carried out the alleged attack.

After this, inspectors who had been on the ground on Syria were sidelined from the on-going investigation whilst repeated attempts by two senior OPCW scientists to raise concerns internally were blocked.

Despite the eminent reasonableness of requests for all the inspectors involved with the investigation to be heard, and the profound importance of ensuring that the OPCW conducts genuinely objective and independent investigations, the drive to block legitimate debate and discussion has reached absurd levels.

And just this last week, on Thursday 15 April, two members of the European Parliament, Mick Wallace and Clare Daley, challenged the Director General to answer questions on the Douma investigation. He failed to answer whilst the Chair of the meeting, Nathalie Loiseau, actually attempted to prevent questions by cutting MEP Wallace’s mike. It is of note that Loiseau served as French Minister for Foreign Affairs when France was bombing Syria in retaliation for the alleged attack in Douma.

Remarkably, rather than defend the Douma investigation, the DG appeared to defer to reports by the Independent Commission on Syria, an organization that does not have any expertise with respect to investigating chemical weapons use nor had investigators on the ground in Syria.

Now, after two years of stonewalling, senior management at the OPCW are confronted with a Statement of Concern signed by the first Director General of the OPCW, José Bustani, four other former OPCW inspectors, plus over 20 leading international experts and influencers, calling on the OPCW’s Director General Fernando Arias to finally address the serious problems with the Douma investigation and, again, to allow the dissenting inspectors to be heard.

According to Hans von Sponeck, the Statement of Concern mailed to the Director General at the Hague, although delivered to the OPCW, was then returned to his home address; not only an insult to the 28 signatories but also indicative of the fear OPCW senior management have about entering into their records such a powerful and damning indictment of the OPCW’s public reputation.

The Statement of Concern has been followed up this last week by a proposal from Hans von Sponeck and Professor Richard Falk calling on the OPCW’s own Scientific Advisory Board to create a forum in which all of the Douma inspection team can be properly heard.

Why is the OPCW — and indeed its key backers — so twitchy about allowing OPCW scientists to transparently and objectively discuss the evidence on the alleged Douma attack? Do they fear that the truth will reveal that no attack actually occurred, and that the US and its allies violated international law by bombing Syria on a false premise?

Is there an even bigger and more damaging truth residing in the background? Is it the case that the entire chemical weapon narrative regarding Syria has been a manufactured deception, aimed at demonizing the Syrian government and maintaining the largely covert ‘regime-change’ policy favored by Western governments?

A near ten-year long deception akin to the Weapons of Mass Destruction deception used to enable the invasion of Iraq back in 2003? And perhaps most seriously, what will allowing the dissenting inspectors to be heard tell us about the relationship of the OPCW to the foreign policy apparatuses of Western governments?

Has the organization become so vulnerable to US-led influence that is now, to all intent and purpose, a potential trigger mechanism for Western-led war? An institution supposedly built to help maintain international peace and security, now effectively a tool for war propaganda?

Returning mail, refusing to answer straightforward and reasonable questions whilst allowing the smearing of its own highly experienced scientists does nothing to arrest the increasingly widespread concern that something has gone badly wrong at the OPCW.

It is time for the OPCW’s Director General to find the courage to address the Douma issue. Continued stonewalling and embarrassing deflections will only worsen the situation and cause the OPCW to fall even harder when the truth is fully known. There is a window of opportunity, albeit a narrow one, for the current Director General to restore the credibility and fitness for purpose of the OPCW. The moment to seize this opportunity is now.

Dr Piers Robinson is a co-director of the Organization for Propaganda Studies and convener of the Working Group on Syria, Propaganda and Media. He writes here in a personal capacity.