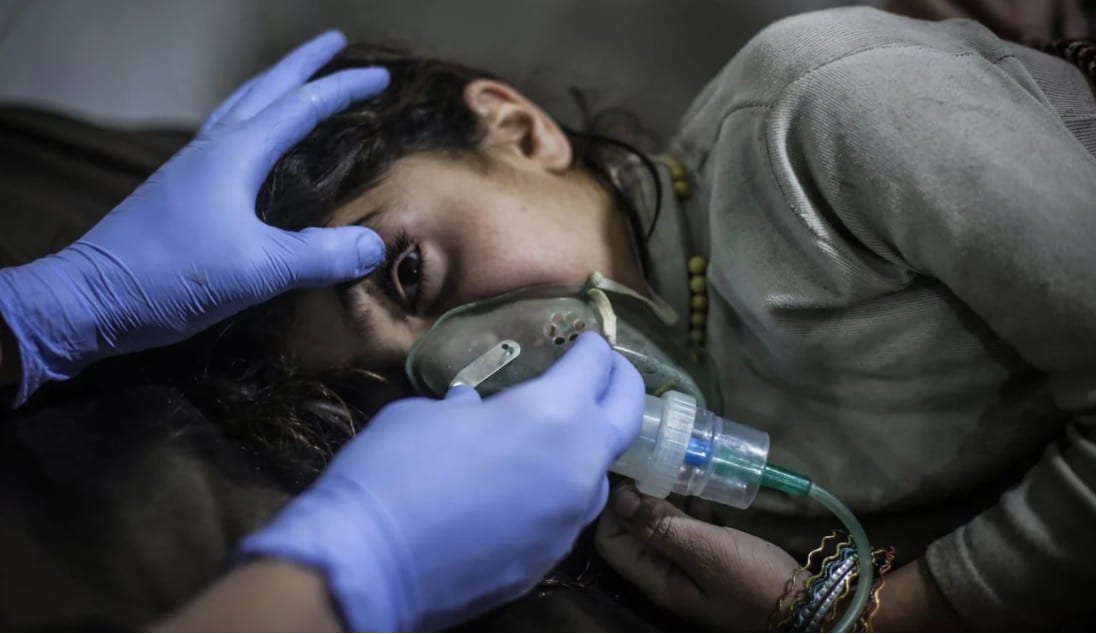 VT: Jett Goldsmith, who writes for Daily Beast, part of the Jane Harman Israeli propaganda operation that includes Newsweek (and so much else) also writes for CIA/MI6 funded “Bellingcat,” perhaps one of the most blatant fake war news operations of all kind.

Harman, for those who don’t know, is exposed in Appendix I as the “handler” of Russian superspy Jonathan Pollard, released by Trump and now living in Israel.  Surprised?

What we are asked to believe is that, whenever Syria closes in on an ISIS or al Qaeda stronghold, at the last minute they drop a cylinder of chlorine or sarin gas.

The amount of testimony exposing these as fake, including doctors claiming to have been forced at gunpoint by terrorists to make videos of kidnapped children being doused with icewater to depict medical care for fake gas attacks.

Forty members of the White Helmets went to The Hague where 15 were allowed to testify that they were paid by the CIA to stage gas attacks in Syria.

See Appendix II (much scrolling) for a report on the “it really didn’t happen” report at The Hague, which is the International Court of Justice.  In response, the US sanctioned the justices at The Hague.

I personally spoke with witnesses of the Khan Shiekhoun “gas attack.”  They described gas cylinders trucked in from Turkey, set out on the ground and film crews, who had been there for days, mostly Israeli’s working for Reuters, setting up equipment, smoke bombs, digging holes.

We have also traced real chemical weapons, some brought in from the Lugar Lab in Tbilisi, Georgia.  Our witnesses watched them loaded on trucks owned by US and British companies, driven by Ukrainian intelligence personnel to took them to the Turkish border and turned them over to Turkish intelligence.

They then were trucked to Hatay, Turkey where they were stored at a safehouse run by Google Idea Groups, a military contractor paid by Saudi Arabia and run by Jared Cohen, who worked for the Bush White House.

Serena Shimm of Press TV filmed the safehouse and trucks, it was reported ONLY on Press TV and Detroit born Serena Shimm, mother of two, was murdered for her efforts in a staged car wreck in Turkey involving a fabricated accident with a garbage truck to cover killing her with hammers and machetes.

Now for the fake story:

A British academic obsessed with pushing Assad propaganda detailed his organization’s links to Russian officials while he was being taken in by a humiliating sting operation.