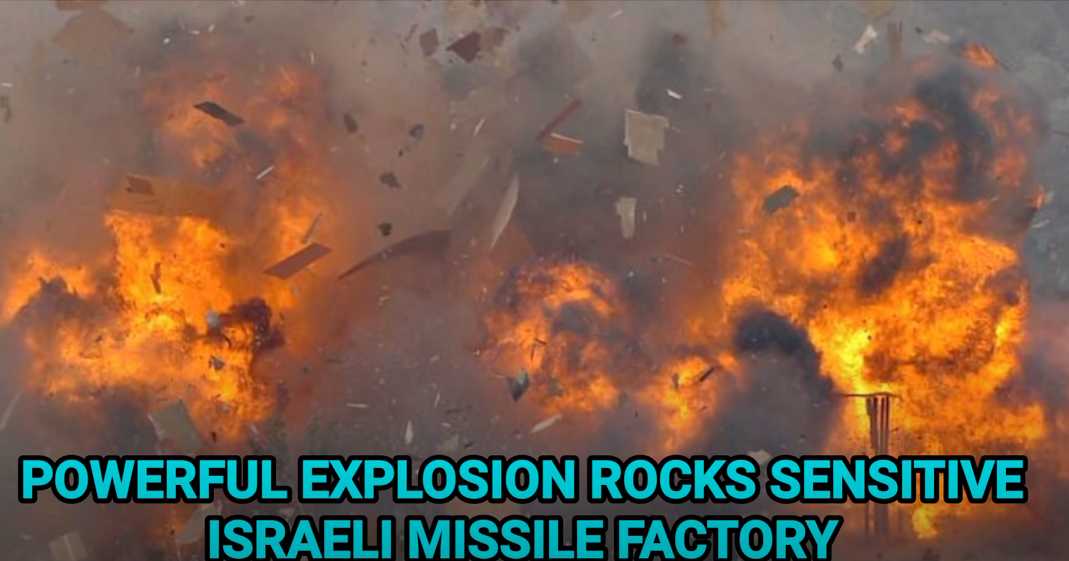 [ Editor’s note: This is a strange story, as we have the larger mushroom cloud in the back left side, and the front right side one with the cloud reflecting the fire burning below it, not a flash from an explosion, but a fire.

Israelis have put out a story about a failed rocket test, certainly a possibility, but if it was something they did not want you to know, they would put out a cover story, like an engine test blowing up. So we must look for clues to test for veracity.

The first thing I see, which is most odd, is just one video for an event like this, especially if a rocket test had blown up, the noise would have been heard a long distance and the usual tons of people would have shot video. So far, this single video is all that I have seen, a hint that others have been blocked, and this one appears to have had the explosion trimmed off the front.

Rocket tests put out huge amounts of smoke, which gets the locals’ attention. A test, if that is what this was, would have had notification put out to the surrounding community. That would have had lots of people videoing, but when I Google ‘Israeli rocket test blows up’, all that comes up is the screen grab from the one video found.

That set off the ‘something is fishy’ bells going off at VT. The fire screen grab I have in feature is from unheard of Boom News edited story from older video clips and stills.

If it was a rocket test, the exciting part would have been to catch the roaring engine at the beginning, but that was trimmed off the video. So at this point what I see is a cover story, which begs the question why, and why now?

We take a look at what event has been in the news, where somebody might want to inflict some payback on Israel, like Iran from the attack on Natanz, where Israeli media even publicized that Israel did it.

We have the timing. Did Iran wait until the second stage of the JCPOA talks adjourned before it decided to send Bibi a message that Iran can reach out and touch someone, and in a way that produced no visible casualties, which would have risked further escalation?

In the real world, we would have seen dozens of videos up, and with sound up on Youtube, but all we have is one silent Twitter video. Tomer and Israel went to a lot of trouble to clean all of the neighbors’ videos off the Net. You can guess the rest… Jim W. Dean ]

Next, from a long time VT reader, we have a machine translation from a Hebrew story on the event…JD

Due to malfunction: Explosion at IMI plant in Ramat Hasharon, no casualties

Above the IMI plant, a lot of smoke is billowed, which is probably caused by mixing different materials. The factory stressed that there was no danger as a result of the explosion. Firefighters who were called to the scene gained control of the incident and prevented the fire from spreading

An explosion was heard today (Monday) in the Ramat Hasharon area, due to an explosion at an IMI plant located in the area. Following the explosion, a lot of smoke rose over the factory. Firefighters and rescuers who arrived at the scene gained control of the incident and no casualties were reported.

An initial inspection revealed that it was an explosion in a room where smoke grenades were stored. According to sources in the factory, there is no danger as a result of the explosion. Balbit, the factory owners, explained that the explosion took place in a smoke factory, after mixing several substances caused the explosion. It was further reported that the smoke generated does not pose a danger.

Moshe Fadlon, mayor of Herzliya, said in response that “the municipality is closely monitoring what is happening in the area together with the fire brigade and environmentalists.” The mayor added that this is “land in which shells, explosives, chemicals and combustibles have been buried for years, a storm that ignites without any warning. This is exactly the fear of such lands. Marked or green will take the matter to his attention. ”

A powerful explosion has rocked a sensitive Israeli missile factory during a test for advanced weapons, according to a report.

The explosion took place on Tuesday during a ‘routine test’ by the Tomer factory for advanced weapon, Israel’s Haaretz daily newspaper reported on Wednesday.

There have been no reports of casualties so far. The factory develops rocket engines and houses various types of missiles.

Locals said they heard an explosion and saw a mushroom cloud at the weapons manufacturing facility, which is located in the central city of Ramla and produces rocket and missile systems used by the Israeli military. Tomer’s offices are located in proximity to residential areas.

“This was a controlled test with no exceptional circumstances,” Tomer claimed in reaction to the blast. Meanwhile, Haaretz said officials may have underestimated the “collateral damage” of the test, which led to the explosion.

Investigations into the cause of the incident has been launched. Established in 2018, Tomer is affiliated to the Israeli ministry of military affairs and is the manufacturer of a new ballistic missile system, the Arrow-4.

Israel’s Arrow-2 and Arrow-3 missile systems are already operational to intercept incoming missiles in the atmosphere and space. Back in February, Israel announced that it was developing the Arrow-4 with the United States.

“The development of Arrow-4 together with our American partners will result in a technological and operational leap forward, preparing us for the future battlefield and evolving threats in the Middle East and beyond,” Israeli minister of military affairs Benny Gantz said in a statement at the time.