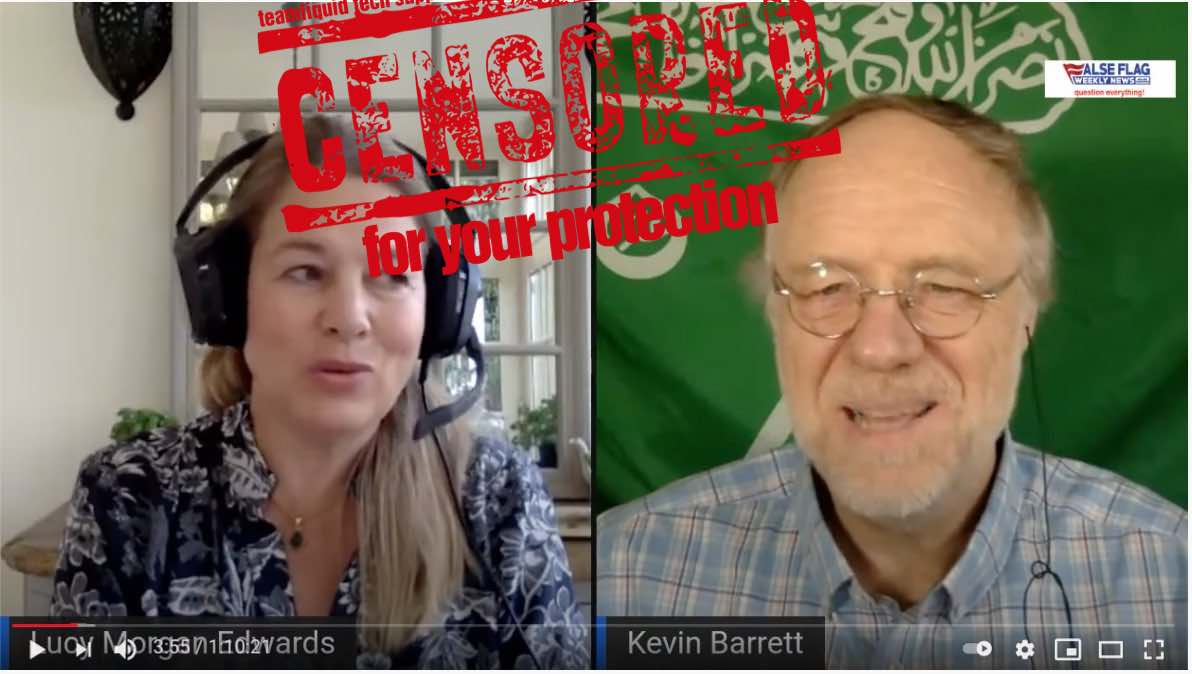 FROM MY FORTHCOMING ARTICLE FOR AMERICAN FREE PRESS:

The problem of censors who don’t know fact from opinion struck home this Sunday when YouTube froze my channel for two weeks due to two strikes for what they call “medical misinformation.” My weekly news roundup show False Flag Weekly News has covered a wide range of medical and scientific experts’ views about COVID-19 related issues, including the safety and efficacy of vaccines. YouTube’s censors apparently didn’t like some of those views. They explained: “YouTube doesn’t allow claims about COVID-19 vaccinations that contradict expert consensus from local health authorities or the World Health Organization (WHO).”

On the show, I made no such claims. Instead I simply reported on the claims that various experts had made, without endorsing any of them. In fact, I was quite skeptical towards many of the alarmist claims of anti-vaccine scientists.

The fact that scientific experts like Geert Vanden Bossche, Mike Yeadon, Reiner Fuellmich, and Sucharit Bhakdi are saying alarming things about COVID vaccines is…well, a fact, and a newsworthy one. The draconian censorship of such facts, and of the experts’ interpretations, suggests very strongly that the elites pushing the COVID party line have something to hide. 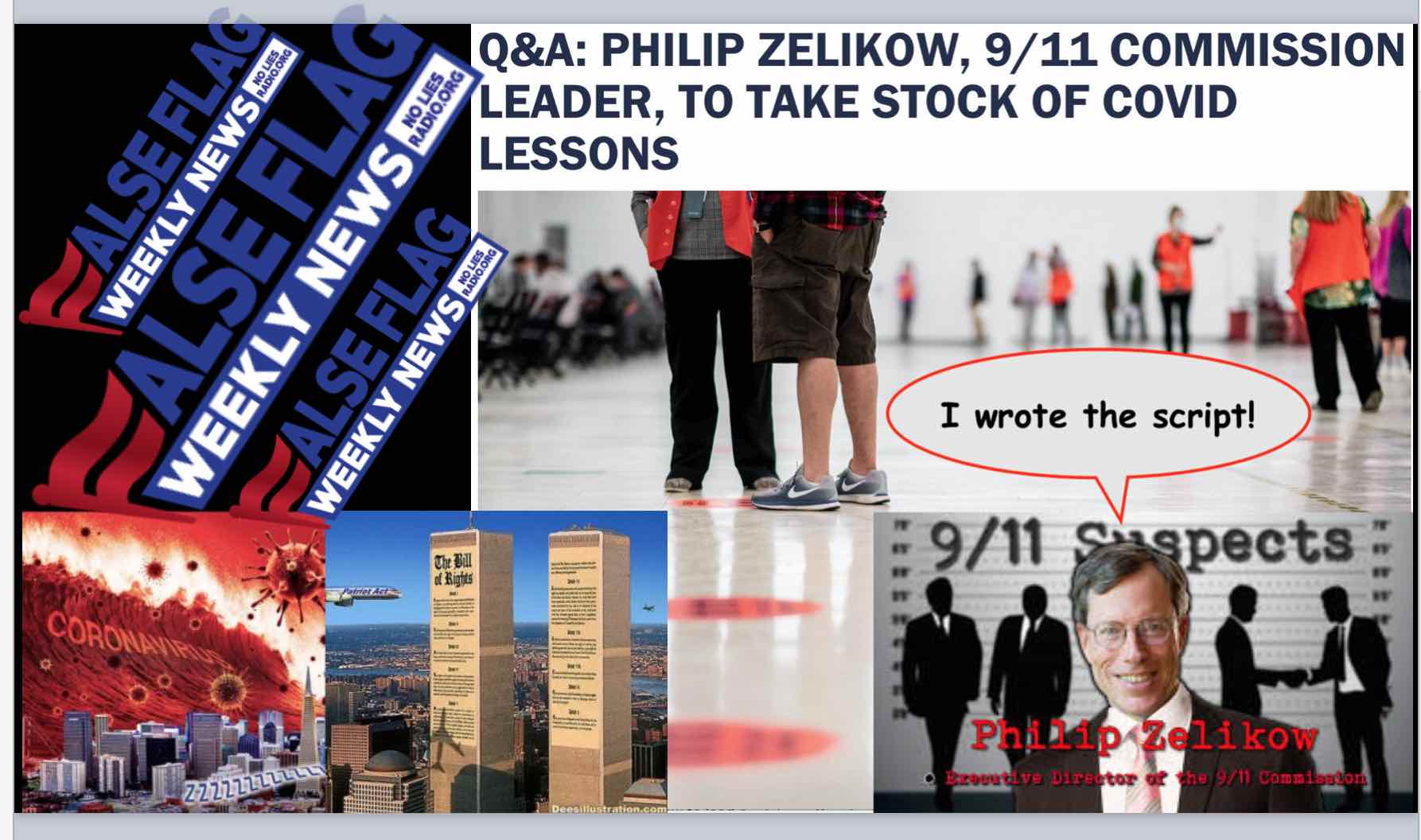 TRANSCRIPT OF THE OPENING OF THE CENSORED EPISODE:

Kevin Barrett: Welcome to False Flag Weekly News, the weekly news show where we question everything, especially public myths of the kind described by Philip Zelikow. I’m Kevin Barrett with Lucy Morgan Edwards this week. Welcome back, Lucy. Great to have you.

Lucy Morgan Edwards: Good to be back, Kevin.

Kevin Barrett: All right. So you’re the author of The Afghan Solution. You were a political adviser to the E.U. in Kabul, Afghanistan. And we will get to some some Afghan stories as we continue. But first, the obligatory disclaimers. Let’s let’s read those disclaimers. OK, first, this could be very disturbing to people who feel an emotional attachment to conventional wisdom as expressed in the mainstream media or from the mouths of politicians. So if you can’t handle questioning that stuff change the channel. Also, we are not a medical advice outfit. I am a doctor of literature, not medicine. So if I tell you to take three pills and call me in the morning, tell me to shove off. So we’re doing political commentary and analysis here, not medicine. No medical advice, no medical information, misinformation, nothing like that. All right. Here we are with our lead story: Philip Zelikow, the self-described expert in the creation and maintenance of public myths, who operates out of the University of Virginia. He not only wrote the script for 9/11 — or many people suspect as much — and then was called on to turn it into a bestselling novel called the 9/11 Commission report. He not only controlled that investigation completely, he wrote the entire report in chapter by chapter outline before the Commission even convened, and he probably wrote it from the script for the actual event that he co-wrote before 9/11. But now here he is back doing the same thing with COVID-19. He’s setting up what he hopes will become a COVID-19 Commission to tell the official public myth of COVID-19c. Lucy, would you say that this guy has chutzpah or something which requires a more obscene expression?

Lucy Morgan Edwards: Well, he surely does. There’s a comment from another academic colleague that that his appointment to do this is a rare public admission that this COVID project is set to run into the long term, maybe for the next 20 years, in the same way that the war on terror has run based on his his myth that has, of course, underpinned it.

Kevin Barrett: And so Zelikow says that “this is the greatest crisis suffered by America, if not the world, since 1945. Scholars and journalists will do their jobs. But there is also a role for the kind of massive investigation and research effort that only a large scale commission can provide.” So here comes the National COVID Commission, chaired by Philip Zelikow. I can’t even imagine what that big lie is going to sound like.

Lucy Morgan Edwards: And together with the censorship from mainstream media, that is becoming increasingly prevalent, that will be the official narrative. And we’re all going to have to follow it because we’re going to be canceled or censored if we don’t, doubtless.

Kevin Barrett: And he’s using a war metaphor, just like he did with the “war on terror” that was scripted before they blew up the Twin Towers and flew remote controlled airplanes into targets and stuff like that. So now apparently he’s saying this is a war, too. He says we have to win the war globally, not just nationally. It’s a world war. So once again, a war metaphor — against a virus.

Lucy Morgan Edwards: OK, so I feel that this is a clue that the same group that were behind 9/11 are behind the current situation. Rolling him out is a huge, clear clue.

Kevin Barrett: They’re not even trying to hide it. They’re actually basically telling us what they’re doing. And there’s a whole theory that Satanists have some kind of metaphysical duty to tell their dupes what they’re doing, because then the bad karma is on the dupes instead of on them. I don’t know if that’s true, but sometimes they act like it.

Kevin Barrett: Indeed. OK, let’s get into our “vaxxed” news. Let’s see…So Alan didn’t flash the the medical advice disclaimer. I can’t believe it. He Usually flashes it about every third story that has anything to do with COVID. OK, so here’s our nonmedical advice about Biden and his two hundred million COVID-19 vaccinations. He said his goal was 100 million. And they’ve shot Americans two hundred million times so far. Half of Americans now have been shot, and they’re still walking around. They’re still alive. And I hope that they will be for a while. Allen, our producer, of course, is a vaccine enthusiast and he’s still doing just fine. So, Lucy, your take on Biden’s heroic triumphalism around his two hundred million shots?

Lucy Morgan Edwards: Well, I mean, who knows if those figures are correct? I’m not sure what they’re based on. It does say in the piece that the government’s planning to incentivize people to take the vaccinations with bonuses, paid leave, gift cards and so on, so that they’re obviously going all in and are very keen to get everyone vaxxed. One could also say, why don’t they get rid of McDonald’s, given that most people die of obesity? So that raises more questions about what’s really going on with these so-called vaccinations, which some people, some eminent epidemiologists, are saying aren’t vaccines at all because they haven’t been fully tested while we’re in the third stage trial, which people are unaware of. And some are actually raising questions as to whether these really are actually vaccinations or just injections of something else.

Kevin Barrett: Oh, but you’re not allowed to say things like that. “That’s medical misinformation!” No, it’s not, because we’re not giving medical advice. We’re simply speculating. (And reporting what others have said.)

So in our next story, we see that the censorship axe is coming down with unprecedented ferocity on anybody who expresses any opinions on any of this stuff that deviate one iota from the official party line as created by the WHO and Faucci and Bill Gates and all their friends. And here’s Senator Klobuchar telling us that they’ve got to start seriously censoring the vaccine skeptics, the super-spreaders of misinformation. So if you express an unorthodox opinion now, you’re the equivalent of somebody who’s killing people by spreading an evil virus. And in this climate…The problem with this, it seems to me, Lucy, is that how can we believe the Orthodox party line when anybody who expresses anything else is axed and destroyed and censored and suppressed? There’s no robust free debate. And so God knows how many experts are out there (who dissent but are afraid to go public.)

Lucy Morgan Edwards: In the UK, it’s worse than that. So they’re going to be seeking to criminalize anyone who expresses opinions that don’t conform to the big tech big pharma view of COVID and what’s going on. There was a very good piece yesterday on UK Column News that went through the development of this increasing censorship and deplatforming. And the drive by the British government just to shut down any alternative viewpoints, any discussion, any academic discussion and so on, and that started really with David Cameron’s speech to the U.N., I think it was in 2013, where he laid out really what they were going to do, and the the non-tolerance for any alternative viewpoints. It was it was a real whoring of his position, actually. I felt it was absolutely disgraceful speech. And of course, the British government operates through Ofcom, which is a quasi governmental organisation, which is pretty totalitarian and is involved in the development of 5G and holds licenses and is therefore profiting from the development of 5G, which they’re, of course, trying to put in in tandem with all of this censorship that’s going on in order to suck up our data and surveil us increasingly.

Kevin Barrett: And so who knows how many experts are out there who actually agree with the skeptics but are afraid to say anything because they’re afraid that they’ll be deplatformed or fired or have their careers or reputations ruined. And that means it’s very hard for us to know what the truth is because it could easily be the majority of the experts that deviate from the party line in the privacy of their own minds, but are afraid to say anything. So in this kind of atmosphere of ferocious, hysterical censorship, it’s impossible to get at the truth. And so anybody who wants to genuinely convince us that the Orthodox line is correct should not be doing this! They should be encouraging free and fearless debate. And then we’ll see how many experts really think this and how many experts really think that. But as it stands right now, we can’t possibly know.