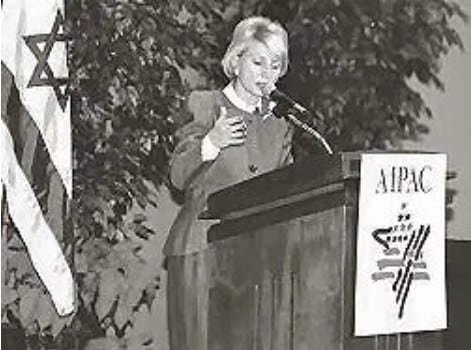 VT’s sources tell us that, behind what is exposed here, is the network that operates most fake whistleblowers on the web, be they “former CIA” or whatever and two very major radio hosts we won’t name either.

1. The nest of Israeli-firsters, Israeli ass-kissers, dual loyalists and no doubt outright Israeli agents that is known as AIPAC is holding its annual policy conference in Washington, D.C. for three days starting Sunday, May 3. Mossad Jane Harman is scheduled to speak there and no doubt Haim Saban will make an appearance. The questions is, will the Israeli agent to whom Mossad Jane admits talking to on the phone and who allegedly bribed her by dangling the chairmanship of the House Intelligence Committee in front of her be there as well? Very possibly so, especially if that person, who for some very strange reason has never had his name released, is an AIPAC employee.   It sure would be nice if the transcripts with full idents suddenly appeared in the main stream media as the conference begins.  Bet that would put an end to the continuing efforts to stop the trial of former AIPAC employees Rosen and Weissman.

Here’s what the tuyuur have pieced together about the conversation that got Mossad Jane some unwanted exposure. This is all based on main stream media and blog reports of various parts of the story.

Mossad Jane is on the phone with an unnamed “Israeli agent“. Now an “agent” of Israel would be an American citizen working on behalf of Israel. And in fact, Mossad Jane has publicly acknowledged that she knows which conversation is the one at the height of the current controversy and that the person she was talking to was an American citizen. (We know this thanks to Dr. Juan Cole, the only Kennedy-liberal type I know whose blog should be ready regularly. Dr. Cole has a good reason to pinch the ass of the Israeli lobby since it played a major part in screwing him out of a job at Harvard University.)  So, it appears, this American Mossad Jane was on the phone with was working on behalf of Israel and thus was an Israeli agent. Now, according to the New York Times and picked up by Mondoweiss, the person Mossad Jane was talking to told her that he would have a major figure in California threaten Pelosi by withholding campaign contributions from her. That “California” figure is reportedly Haim Saban, a billionaire who came to the United States from Israel.

So, who was the person Mossad Jane was talking to who was suspected of being an Israeli agent? Saban already is one and, so it seems, so is Mossad Jane. Who’s that third guy? Does he work for AIPAC like Rosen and Weissman?

We think it would be a good idea for the FBI to go back into AIPAC’s offices this Sunday with warrents while the organization is holding its Israel love fest and maybe have a look around.

We also think it would be a good idea if the independent media would attend AIPAC’s version of Bohemian Grove and carefully report what is said and WHO is in attendance.  Maybe they’ll even get to interview Mossad Jane herself.

2. Many have commented on how interesting it is that Mossad Jane was a strong supporter of questionable wire-tapping schemes that Alberto Gonzales favored and that he may have even used evidence gathered against her to keep her on key.  Not so sure about that last point, but there is no doubt that the Zionist Golem is a major player in the erosion of the rights of every-day US citizens.  Despite all the blathering on about the concept of “healing the world” (tikkun olam) that the “Zionist light” crowd, to borrow once again Xymphora’s phrase, likes to attribute to liberal and progressive Judaism, there is quite another side to this concept and I think you had just better pay attention to it folks.

Rabbi Avi Shafran, the head of public affairs for the charming Agudath Israel of America, informs us that tikkun olam has been grossly misrepresented by the liberal Jewish community in the course of  his review of a number of meanings of the phrase. He quotes Maimonides on the concept:

“[In] any case where someone takes human lives without clear proof [of a capital offense] or the issuance of a warning, or even on the strength of a single witness [as two are required in a Jewish court], or where a person hates someone and kills him [seemingly] by accident, a king is permitted to execute [the unjustified taker of life] in order to repair the world [“li’saken ha’olam”] according to the needs of the time� to strike fear and shatter the strength [literally, “break the hand”] of the world’s perpetrators of evil.”

Gee, isn’t that nice?  Shafran’s view on this is even more horrifying than the quote itself:

First he paraphrases the quote to make sure the reader understands what this most famous of Jewish thinkers has written (as usual red highlighting is mine):

And so, Maimonides informs us, there is yet another meaning to tikkun olam, the authorization of a nation’s leader to do whatever is necessary, “according to the needs of the time” – even suspend the ordinary rules of evidence in capital cases – to preserve the security of his society from those who seek to disrupt it.

Shafran very much approves of this and poses the question of how the Maimonidean concept of tikkun olam might pertain to our own society, leaders and times.

I hope you are sitting down. Ready? Here goes:

Reasonably, it would seem to advocate the right, in fact the responsibility, of the chief executive of a country threatened by murderous elements to take strong and unusual action to undermine those enemies of civilized society – even if some personal rights may be compromised in the process.

So, interestingly, the concept of tikkun olam would seem to argue most eloquently today for things like, say, the imprisonment of enemy combatants, secret wiretaps and surveillance of citizens.

And thanks to people like Mossad Jane and her AIPAC and NeoCon buddies, that’s exactly what we have.

3. Mossad Jane never did get that job she was reportedly offered as the chair of the House  Intelligence Committee even though she is said to have agreed to do the bidding of an “Israeli agent” by working to get the AIPAC spy trial killed.  The chirping here at Mantiq al-Tayr has brought us to the conclusion that she did not get the job because of the scandal over this very issue that was in the media back in 2006 when she could have been appointed. Pelosi, who may hate Harman – which is about the only good thing about Pelosi that I can imagine – probably didn’t appoint Harman to the post because if she had done so, the transcripts that are the center of controversy today (and back in 2006) probably would have been released.  This would have shed so much light on the Israeli lobby that we would have seen them all running for cover like kitchen cockroaches in a slum owned by Sam Zell.

4. We want to thank Hesham Tillawi and his weekly radio show on RBN called “Current Issues” for the “Mossad Jane” reference. Furthermore, last time we promised you that we would teach you all how to say the name “Hesham.” His name is not Heyshaaam, nor is it Heshem nor Hessian, nor Hshem, nor even just plain old Heeeesham. No, no, no. Even his friends at RBN like the great Michael Collins Piper can’t say his name right. As for the guest host on his show, Mark Glenn, he’s pretty much hopeless on this one issue and he even has Arabic blood in his veins.  So let’s learn to say it correctly. Our guest teacher for this lesson is no less than Mossad Jane herself.