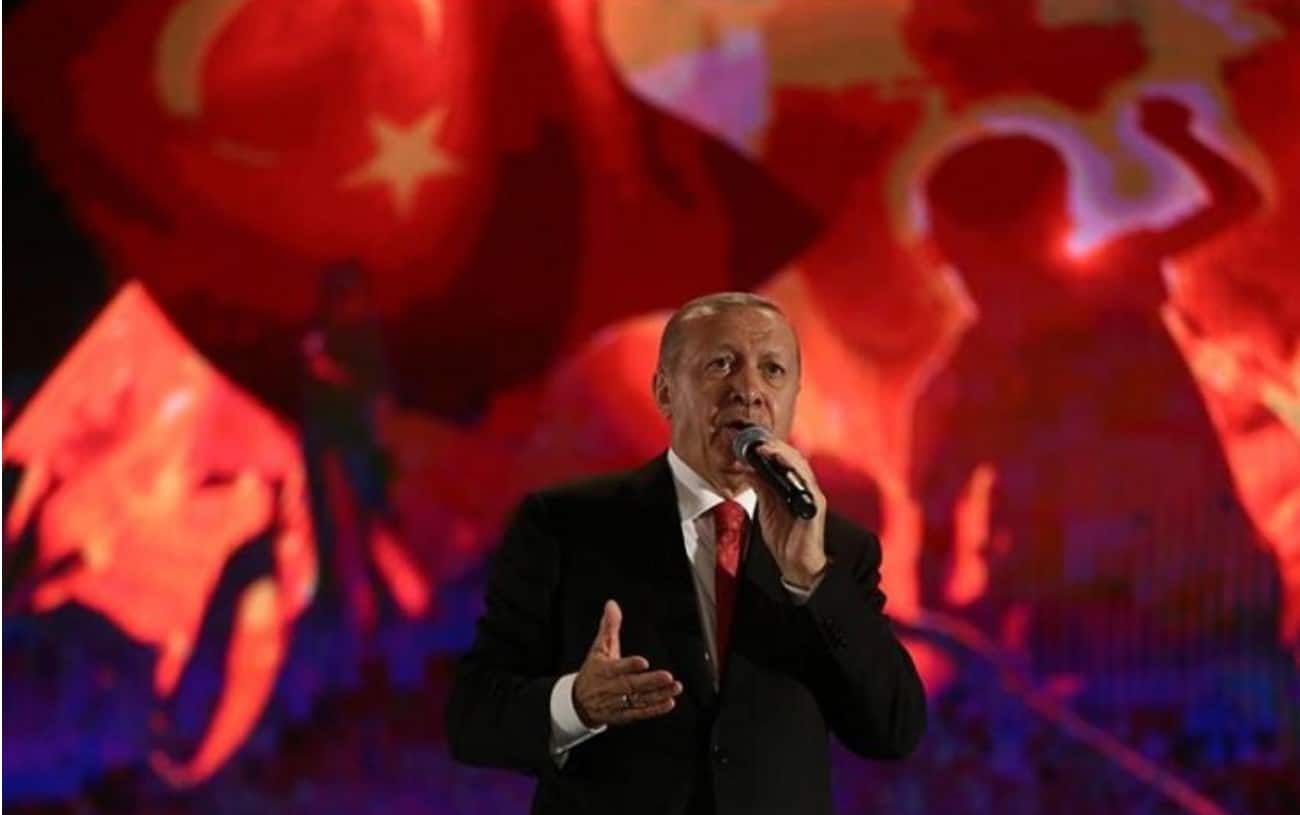 …by F. William Engdahl for NEO

After failing to block Turkey’s purchase of the advanced S-400 Russian air defense system, Washington diplomacy in recent months appeared to have managed to “flip” Turkish President Recep Tayyip Erdogan to support of US interests in several critical countries from Libya to Armenia to Ukraine, even Afghanistan.

With the Turkish economy on the brink of catastrophe as the Lira plunges, it looks more and more like cynical strategists in Washington could have merely lured the wily Erdogan into a deadly bear trap.

Turkish President Erdogan has been called a master at playing off all sides to his advantage, a political chameleon who has flipped from Washington and NATO of which Turkey is a vital member, to Russia and Iran and also China.

In 2016 he accused the CIA of being behind a coup attempt to assassinate him and bring the CIA-controlled networks of exiled Fethullah Gülen into power as Washington had had enough of Erdogan’s flips in allegiance. The coup failed and reports were that Russian intelligence intercepts were given Erdogan that saved his life.

After that, relations with Moscow improved markedly. In November 2015 Russia had imposed a severe travel ban to Turkey of Russian tourists and a ban on Turkish food imports in retaliation for a Turkish jet shooting down a Russian jet inside Syrian territory, an act of war. The Russian sanctions hit the Turkish economy deeply.

Then Erdogan began a shift towards Moscow. In 2017 Turkey ignored repeated protests from Washington and NATO and agreed to buy the advanced Russian S-400 air defense missile system, said to be the most advanced in the world. The same time Russia began construction of the first of two Black Sea gas pipelines to Turkey, TurkStream in October 2016, further distancing Ankara and Washington.

By 2018 relations between Washington and Ankara had become strained to put it mildly. The Big Three US credit rating agencies, Fitch, Moody’s and S&P all downgraded Turkey’s sovereign debt to “junk” status citing Erdogan’s recent hostile political moves. The result was a free-fall of the Lira forcing the Central Bank to sharply raise interest rates and strangle economic growth in the process.

By August 2018 the US was also imposing economic sanctions on Turkey demanding the release of Andrew Brunson and other US citizens accused of espionage on behalf of the 2016 Gülen coup attempt. Turkish steel and aluminum exports were hit with doubled US tariffs as inflation rose.

A pledge by Erdogan ally and fellow Muslim Brotherhood backer, Qatar, to invest $15 billion in Turkey managed to calm the crisis and a subsequent visit of Erdogan to Beijing secured some added billions in Chinese aid. The Turkish foreign minister accused “foreign powers” of being behind the Lira crisis for political reasons.

After a shock loss of the key political stronghold of the Istanbul Mayoral post in 2019, Erdogan clearly has been attempting to improve his “usefulness” to the West, especially to Washington. He faces major national elections latest 2023 and could be in danger of losing his grip if the economy continues to fall.

Both Donald Trump and now Joe Biden appeared to welcome the Turkish help especially when it hurt Russian interests. So in 2019 when Turkey lent materiel and military support to the Washington-backed government in Tripoli in their war with Russian backed forces of General Haftar, it averted a collapse of the corrupt Tripoli regime, to the approval of NATO. Indirectly, Erdogan went against Putin and Russia.

Similarly, in September 2020 during the outbreak of the “Armenian–Azerbaijani War,” Turkey supplied critical drones and military advisors to their Muslim ally Azerbaijan against Armenia, a member of Russia’s Eurasian Economic Union. It was another indirect Turkish strike against Russian strategic interests, this, very close to home.

In October 2020 following significant Azeri military advances in Nagorno-Karabakh, Erdogan praised Azerbaijan’s “great operation both to defend its own territories and to liberate the occupied Karabakh,” adding that Turkey stands with and will continue to stand with “friendly and brotherly Azerbaijan with all our means and all our heart.” Putin was reportedly not amused.

The relations between Turkey and Armenia are hostile and go back to the First World War when Ottoman Turkey was charged with exterminating more than 1.5 million Armenians in an ethnic cleansing. Turkey to the present day vehemently rejects accepting responsibility for genocide against Armenians who after 1920 became part of the Soviet Union until its dissolution in 1991.

Now, as recently as April 10, as the Biden White House escalated pressure on Ukraine to act militarily to recapture the breakaway Donbass region as well as Crimea, which is today part of Russia, Erdogan invited Ukrainian President Volodymyr Zelensky to Turkey for talks on military cooperation.

In Istanbul after the talks, Erdogan announced that the two presidents had signed a 20-point strategic agreement that included Turkish support for Ukraine demands to return Donbass to Kiev as well as Crimea, the base for the Russian Black Sea Naval fleet.

Following the CIA-backed coup in Ukraine in March 2014 Crimeans held a referendum in which citizens overwhelmingly voted to join Russia, something NATO was not happy about to put it mildly. In addition, Erdogan announced on April 10 that Turkey supported Ukraine’s bid to join NATO, an explosive issue as it would be a direct strategic threat to Moscow.

Already in January 2020 Turkey and Ukraine signed major military trade deals including an agreement that Ukraine supply Turkey with $600 million of cruise missile engines. Ukraine also supplies the Turkish military with engines for its drones that evade US sanctions on Turkey over the S-400.

More recently Turkey has been reselling its Bayraktar TB2 combat drones to Ukraine’s military which plans to use them against the Donbass fighters. In brief, Erdogan has been doing many things to back US actions against Russia in recent months.

This makes it all the more curious that US President Biden on April 25 became the first US President to go against NATO ally Turkey and accuse it of genocide against the Armenians in 1915. Since Turkey joined NATO the subject of Armenian genocide has been taboo as Ankara has repeatedly made clear.

Why, just when Erdogan is playing a key support role in the US Administration’s anti-Russia agenda, did Biden or his advisers find it necessary to come out blaming Ottoman Turkey for a genocide against Armenians that took place 106 years ago?

Given the reemergence of the Lira crisis since Erdogan fired the head of the Central Bank last month, replacing him with a party ally, Turkey has become vulnerable even more than in 2018. At this point it seems Washington has the wily Erdogan in a bear trap.

If his new Central Bank chief now moves to cut interest rates to spur the economy amid the Lira crisis, tens of billions of Western investment funds could exit Turkey and plunge the economy into its worst crisis since 2018, likely even worse, prior to the 2023 national elections.

For years Turkish companies have turned to dollar debt markets where interest rates were far lower than the Turkish rates. The Lira fall makes it far more costly to repay in dollars, especially as the economy is hit by the corona crisis and tourism has again been blocked by Moscow until June, claiming covid risk but clearly related to Erdogan’s recent Ukraine moves.

Erdogan has lost little time in reacting to the affront. Turkish protests have begun outside the strategic NATO Incirlik Air Base are demanding US troops leave.

On April 24, a day after Washington notified Erdogan of its planned Armenian genocide statement, Erdogan launched military actions in Iraq and Syria. The Turkish military announced that its Operation Claw-Lightning had resumed, aimed to “completely end” the terror threat on Turkey’s southern border to Syria.

It involved airstrikes at positions of the PKK Kurdish forces which the US backs against Damascus. Turkey claims the PKK Kurds are terrorists threatening Turkey.

At the same time the Turkish forces fortified their established position in Greater Idlib where there are now thousands of troops as well as heavy weapons, including battle tanks, infantry fighting vehicles, artillery, rocket launchers, surveillance systems, jammers and air-defense systems. Since 2018, the Turkish Idlib presence was supposedly to jointly monitor with Russia a mutual de-escalation on the Syrian territory.

More surprising has swiftly Erdogan moved to mend fences with his Arab neighbors. On April 26, Erdogan’s spokesman Ibrahim Kalin said that Turkey was looking to rectify relations with Saudi Arabia where bilateral trade dropped a whopping 98% since an official Saudi boycott of Turkish goods in 2020 over what Saudis called hostile Turkish acts, a reference to Erdogan’s provocative, very public accusations that the Saudis brutally assassinated Saudi journalist Jamal Khashoggi in Istanbul in October 2018, as well as Turkish support for Qatar amid a Saudi boycott.

Before 2013 Riyadh had been a major financial backer of Erdogan who was then a key actor in the war against Assad in Syria. The new regime in Washington so far has been quite cold to Saudi Arabia, a big shift from Trump’s time.

At the same time Ankara is seeking to rebuild ties with Egyptian President al-Sisi that have been strained since the Egyptian military ousted Morsi and backed al-Sisi in a 2013 counter-coup to the Muslim Brotherhood’s US-backed Arab Spring. Were Erdogan to succeed in regaining the support of the Arab Gulf states including Saudi Arabia, Turkish military support for the Gulf could well alter Middle East geopolitics to the disadvantage of Washington.

Over the past two years Turkey has emerged as a major surprise military force through deployment of its battle-proven Bayraktar TB2 drones owned by the family of President Recep Tayyip Erdogan’s son-in-law, Selcuk Bayraktar. They have been decisive in Libya, in Nagorno-Karabakh and Syria.

What comes next in the turbulent rule of Recep Tayyip Erdogan is more uncertain that at anytime in his near twenty-year hold on power, first as Prime Minister and now as President. With national elections slated for 2023, if the economy continues to tank, all bets are off.

The Biden “genocide” declaration suggests that Washington may try to push him over the edge well before 2023. However, the outcome is far from clear at this juncture, and very much depends on Erdogan’s ability to force effective new alliances.