Home Government Victoria Nuland again? The one who said “fuck the EU” and who... 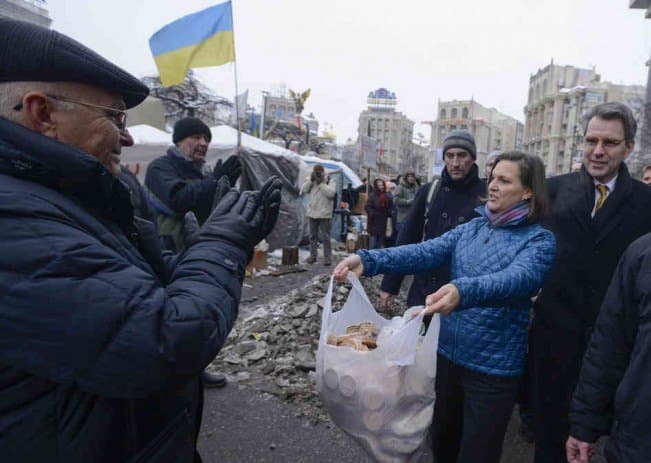 As Jim W. Dean would put it, you can’t make this stuff up. Victoria Nuland, the hawkish and Neocon woman who brazenly declared “Fuck the EU,” is now Secretary of State for Political Affairs. Secretary Antony Blinken tweeted:

“Thrilled that Victoria Nuland was confirmed as Under Secretary of State for Political Affairs. Her deep experience across the board will be so important to me and the Department as we move forward with a foreign policy that delivers for the American people.”

What, then, is Nuland’s “deep experience” about? Well, virtually everyone knows what Victoria Nuland did in Ukraine by now. If you have been watching soap opera and other TV programs which really waste your precious time and energy, then you have been left behind. Nuland was involved in creating political chaos in Ukraine. Nuland is the Jewish Neocon who once bragged about spending over five billion dollars destabilizing Ukraine and bringing chaos in the country, all in the name of “democracy” and “freedom.”[1]

Nuland is also famous for using phrases like “Fuck the E.U.”[2] When she was caught red-handed using those words, she blamed Russia for releasing her own words.[3] So, Nuland uttered a perverse statement, but Russia has to suffer a great deal for making it available to the world. “Fuck the E.U.,” Nuland seemed to suggest, was supposed to be a secret. 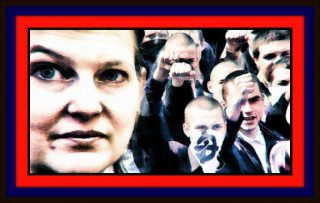 Well, Nuland couldn’t “fuck the E.U.,” despite the fact that she spent billions of taxpayer dollars in Ukraine. But ever since, she seemed to have developed some sort of incestuous hatred for Russia. The E.U. no longer needs to be screwed; Russia is.

Nuland was also known to cook up evidence against Russia. She said back in 2015: “The [Assad] regime continues to barrel bomb its own citizens with impunity, perhaps even emboldened by Moscow’s help.”

So, Assad was just stupid. He was just bored. He had nothing to do but to “barrel bomb its own citizens.” Nuland’s perversion here was pretty clear: terrorists were citizens. If you fight them, then Nuland is going to be upset. Russia cannot have a role in the political and ideological quagmire because, as we have been told by NWO agents, the country is “dangerously exacerbated” the conflict.

For Nuland, both Syria and Russia were deliberately creating carnage in “Syria’s western cities.” With the help of Russia, she continued, the Assad government was dropping “barrel bombs on innocents on a daily basis.”[4] This was a lie then and it is still a lie.

We can dismiss Nuland’s promiscuous allegation that both the Russian and Syrian armies were liquidating the Syrian population. President Obama himself knew that the Syrian government has been protecting the small Christian population in the region.[5] Even Zionist outlets such as PBS had this to say in 2011:

“As the rest of the world turns on Syrian President Bashar al-Assad, who is an Alawite, Syria’s Christian population is steadfastly pulling for the dictator – and has for years.”[6]

Obviously Nuland ignored all those facts and moved on to pursue her own ideological weltanschauung. We all know by now that she has a history of propounding lies, deceptions, fabrications, and colossal hoaxes. We also know that whenever an entity does not allow her to pursue her essentially diabolical ideology, she would put a spell on that entity. That’s why again she said “Fuck the E.U.” When Angela Merkel planned to meet with Russia to discuss peaceful resolutions, Nuland’s blood pressure went to the roof. She said that it was “Merkel’s Moscow junk” and “Moscow bullshit.”

Imagine the outrage throughout the Western world if Russia or Iran even remotely approached those languages. Zionist lizards and Neocon scorpions would be very upset—and rightly so. But the Zionist media didn’t even ask for Nuland’s removal from office.

We also have to keep in mind that Nuland supported neo-Nazis in Ukraine. It was pretty well confirmed in 2014 that the United States was supporting Neo-Nazis in Ukraine in order to fight Russia.[7] For example,

“Andriy Parubiy, the new secretary of Ukraine’s security council, was a co-founder of the Neo-Nazi Social-National Party of Ukraine (SNPU), otherwise known as Svoboda. And his deputy, Dmytro Yarosh, is the leader of a party called the Right Sector which, according to historian Timothy Stanley, ‘flies the old flag of the Ukrainian Nazi collaborators at its rallies.’ The highest-ranking right-wing extremist is Deputy Prime Minister Oleksandr Sych, also a member of Svoboda…

“The Svoboda party has tapped into Nazi symbolism including the ‘wolf’s angel’ rune, which resembles a swastika and was worn by members of the Waffen-SS, a panzer division that was declared a criminal organization at Nuremberg. According to this BBC news clip two Svoboda parliamentarians in recent weeks posed for photos while ‘brandishing well-known far right numerology,’ including the numbers 88 — the eighth letter of the alphabet — signifying ‘HH,’ as in ‘Heil Hitler.’”[8]

In an article entitled, “Ukraine crisis: the neo-Nazi brigade fighting pro-Russian separatists,” the London Telegraph declared: “the western-backed government in Kiev is throwing militia groups – some openly neo-Nazi – into the front of the battle.”[9] One member who went by the name of “Phantom” declared, “Personally, I’m a Nazi.”[10] Like many revisionists, Phantom believes that the scale of the Nazi Holocaust “is a big question.”[11]

Many of those groups carried huge posters of Stepan Bandera, the man who collaborated with Nazi Germany during World War II. Even the Daily Beast, a thoroughly Zionist outlet, declared: “Not all the members of the Ukrainian ultranationalist militias the U.S. is training have SS tattoos, and not all espouse fascism. But enough do to be worrisome.”[12] It continued to report the Azov Battalion was not just

“a matter of the occasional very confused kid hung up on some twisted variant of the Nazi ideology who wants to enlist. One could say it goes back to the history of collaboration between some Ukraine nationalists and the Nazis fighting the Soviets during World War II. But more specifically and more recently there is a recurring history of Nazi ideology in the battalion that goes back to its founder, Andriy Biletsky, who pulled together the neo-Nazi group called the Social-National Assembly (SNA) in 2008.”[13]

Those were the people that our own government—and even the New York Times and the Atlantic[14]—were supporting![15] The Jewish Daily Forward said last January that the Ukrainian armed forces were even hiring Neo-Nazis from Brazil.[16]

Not a single Jewish organization in American protested against this because supporting Neo-Nazis in Ukraine was largely a Neoconservative enterprise. Victoria Nuland spent billions of dollars coaching those Neo-Nazis. Moreover, David Frum of the Atlantic scorned at the claim that there was a small but significant group of Neo-Nazis in Ukraine.[17] Those Neo-Nazis, Frum implied, were seeking “true democracy in Ukraine.”[18]

Do you now see how the Powers That Be can manipulate things around and move the masses to an essentially wicked ideology? If they condemn Neo-Nazis everywhere, then the Neoconservative movement should be dumped in the trashcan of history once and for all.

As we have repeatedly declared in the past five years or so, the New World Order seeks to destroy the reasonable world and political order and replaces them with an essentially diabolical ideology. Victoria Nuland and her family (Robert Kagan and Fred Kagan) are part of that diabolical enterprise. They created chaos in Ukraine and other places, and there was no need to put them on a political pedestal anymore.