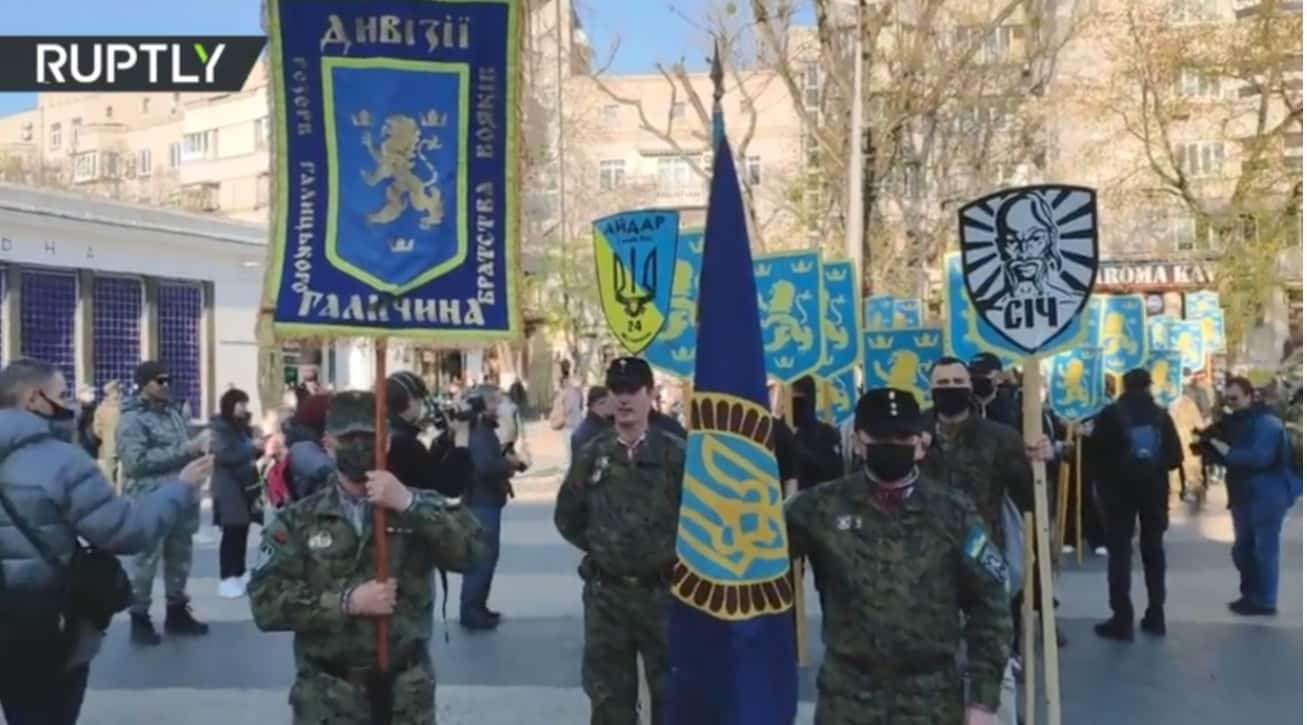 Ukraine may not be a fascist state, but it has a fascism problem

By Paul Robinson, a professor at the University of Ottawa. He writes about Russian and Soviet history, military history, and military ethics, and is the author of the Irrussianality blog

Wednesday’s march in memory of the 14th SS Division ‘Galicia’ in downtown Kiev demonstrated not so much that Ukraine is a fascist state as that its leaders are guilty of turning a blind eye to the far right and of exploiting it.

For their own ends, of course. Meanwhile, with the exception of German and Israeli officials, the West pretends not to notice. Particularly Anglophone media correspondents in the Ukrainian capital and those who cover the country from their bases in Moscow.

Perhaps they are inspired by Horatio Nelson, who famously said “I really do not see the signal,” after being ordered by signal flag to cease his attack at the Battle of Copenhagen. Instead, the Admiral put his telescope to his blind eye and professed not to notice what was visible to all around him.

Willful blindness served the Admiral well that day, but as often as not it leads to disaster. An example is modern day Ukraine’s attitude to its Nazi past.

From the moment that President Viktor Yanukovich fled Kiev in February 2014, supporters and opponents of the Maidan have debated the nature of the events that led to his overthrow. To its backers, it was a peaceful and popular “revolution of dignity” conducted in order to topple an authoritarian dictator and install a democratic order. To opponents, it was a coup d’état, led by an armed and violent far right mob, that installed not a democracy but a “fascist junta,” which replaced the democratically elected Yanukovich administration.

The latter point to the prominent role played in the events of February 2014 by the far right group Right Sector, which provided much of the muscle needed to overthrow the government. They point also to the fascist symbols favored by some of the so-called “volunteer” battalions that have fought in the war in Eastern Ukraine, most notably the Azov Regiment. Add to this the nationalist rhetoric associated with Ukraine’s president from 2014 to 2019, Petro Poroshenko, as well various legislative acts designed to restrict the use of the Russian language, and the picture of post-Maidan Ukraine as a “fascist” state is complete.

Against this, supporters of Euromaidan note that the far right constituted a small minority of those who protested against Yanukovich, and that fascist groups enjoy very little popular support, as seen by their poor performance in Ukrainian elections – although it’s fair to say that some of Poroshenko’s own rhetoric has plenty of far-right sentiments.

Anyway, pro-Maidan voices argue that Ukraine is a parliamentary republic, whose president could not remotely be deemed a fascist, and who professes to be committed to liberalizing and democratizing the country he leads.

Into this heady mix there stepped this week a hundred or so Ukrainian nationalists who marched in Kiev to celebrate the anniversary of the creation of the 14th SS Division ‘Galicia’ in 1943. The division was made up of Ukrainian volunteers and formed part of Nazi Germany’s Waffen SS combat force during World War II. Largely destroyed by the Soviet Army in July 1944, it was reformed and engaged in anti-partisan operations in Slovakia and Yugoslavia until it surrendered in May 1945. Although the division has not been definitively linked to major war crimes, many of its members previously served in German irregular forces guilty of atrocities against civilians. After the war, the SS, to which it belonged, was declared a criminal organization.

One might imagine that celebrating an SS unit was beyond the pale, but last week’s event, though small, was unusual only in that it happened in Kiev. Commemorations of the 14th SS Division have been quite common in Western Ukraine for some time, and there is even a monument to the Division in Oakville, Ontario, in Canada.

Unsurprisingly, opponents of the post-Maidan Ukrainian government have leapt on the march in Kiev as evidence that they are right to portray modern Ukraine as fascist. Attempts by the Ukrainian authorities and their backers to put their telescope to their blind eye and declare “I really do not see any fascists” ring hollow. When enormous banners depicting Nazi soldiers as heroes are unfurled in the capital city, it’s hard to deny that there’s a problem. Even Anton Drobovich, the head of the Ukrainian Institute of National Memory, an organization generally known for its nationalistic line, felt obliged to condemn the march, saying that, “The glorification of the SS is unacceptable for a European country.”

Seven years after Crimea rejoined Russia, Western leaders are fooling themselves if they hope peninsula can ever return to Ukraine

This, though, begs the question of why the Ukrainian authorities permitted the march to take place. This year, the traditional parade to celebrate the end of the Second World War in May 1945 (and thus also to celebrate the Soviet victory in the war) has been cancelled on the grounds that large crowds should not be meeting during the Covid pandemic. Yet, for some reason this same logic was not deemed to apply to the march in memory of SS collaborators.

This suggests an unhealthy bias in how the Ukrainian government views its country’s past. The problem here is not that the government is a “fascist junta.” That is clearly an enormous exaggeration. Despite restrictions on the use of the Russian language and the recent repression of some anti-government media and personalities, Ukraine remains a relatively free and open society. It’s not remotely fascist.

Instead, the problem is that the Western-oriented, notionally liberal, intellectuals and politicians who have led Ukraine since February 2014 have for tactical reasons chosen to turn a blind eye to the far right. Several possible reasons lie behind this decision. First, the far right has proven useful to the pro-Western Maidan elite, providing it with the armed force it has needed to first win and then hold onto power.

Second, there seems to be widespread sentiment that, though the far right is a bit extreme, its heart is in the right place, as it were. This is coupled with a belief that fascist symbols aren’t really fascist, but merely represent the national struggle against communism. And finally, the government may simply be afraid of them.

Making matters worse, Western powers have proven unwilling to confront Ukraine on this issue, while the Western media has, with some notable exceptions, chosen to ignore it. Last week’s march in Kiev, for instance, failed to make the news in any major English-language media outlet other than RT. Rather than admit that Ukraine’s critics have a point, Western commentators prefer to look the other way.

While this logic may make some sense, it is ultimately self-destructive. The far right brought the current regime to power, but in the process it thoroughly delegitimized the new order in the eyes of a significant part of the population. The result was civil war. Ukraine isn’t a fascist state, but it does have a fascism problem. For its own sake, the sooner it recognizes this, the better.

After march honoring WW2 Nazi ‘SS’ takes place in Kiev, Ukraine may not be a fascist state, but it has a fascism problem.