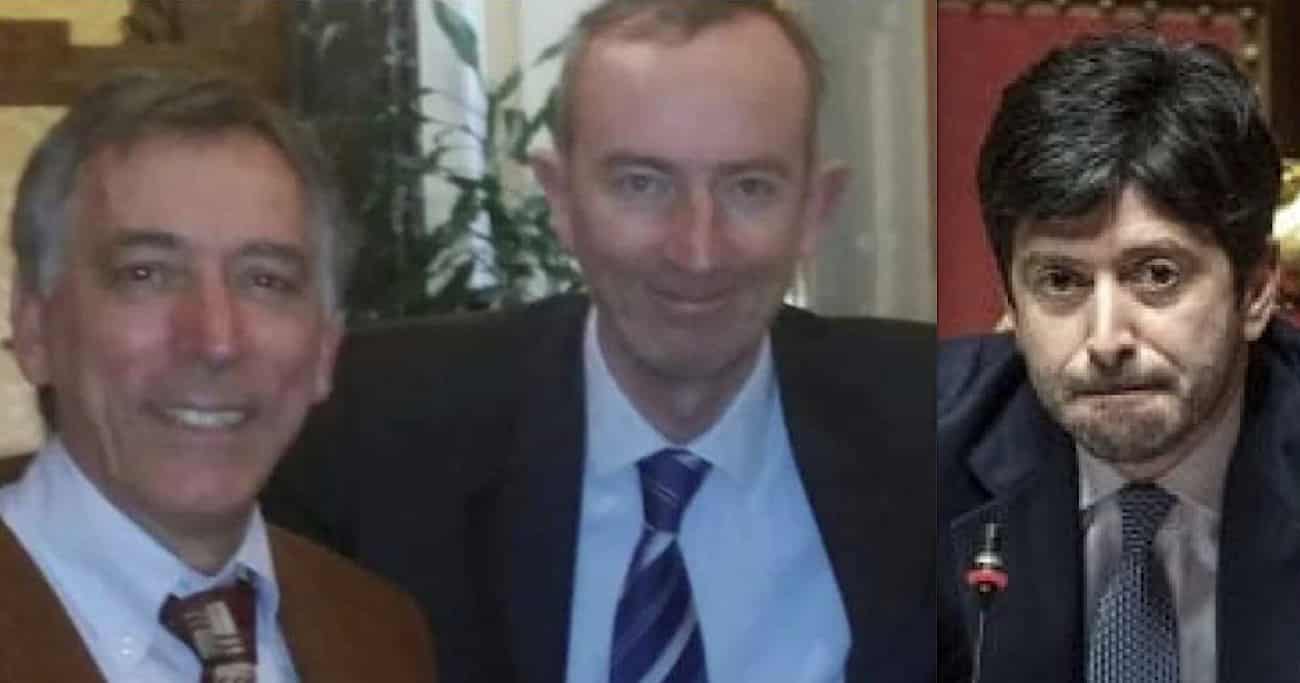 In the cover photo, from left, the biologist Franco Trinca, Marco Tiberti and Minister Roberto Speranza

The copyright of the definition “State’s massacre” belongs to the Sicilian magistrate Angelo Giorgianni who gave this title to the book written together with the Neapolitan medical examiner Pasquale Mario Bacco, which aroused vehement controversy especially. We have already written about this background in the article Who touches the Mafia, Freemasonry and Big Pharma ends up under Mainstream’s fire, taken from a Canadian and French counter-information site, about the interests of Politics, Freemasonry and the ‘Ndrangheta.

The same concept on the “State’s massacre” that would have taken place during the management of the pandemic was expressed in recent days in a press conference in the Chamber of Deputies by the nutritionist biologist Franco Trinca, flanked by the lawyer Alessandro Fusillo, and by the European association Consumers represented by the lawyer Francesco Scifo and the President Dr. Marco Tiberti who filed a detailed complaint with the Public Prosecutor of Rome and other prosecutors.

We come therefore to analyze the denunciation of Trinca and Tiberti which moves on the same legal path as the complaint presented by Judge Giorgianni, as president of the Heretical association, to the International Criminal Court of The Hague on the charge that the lockdowns in addition to being useless, they have been transformed into psychological torture such as to constitute, in his opinion, serious crimes against humanity.

«Yesterday 21 April, at the press conference room of the Chamber of Deputies, made available on the initiative of the Hon. Sara Cunial, a press conference was held to present the complaint forwarded to the Rome Public Prosecutor’s Office and sent to other Public Prosecutors, in which 80 folders of scientific and other documentation, facts and circumstances that evoke the profile of FRAUD were highlighted of the health and government authorities in the management of the Covid-19 health emergency, in which Italy more than other countries has sunk for more than a year without even today seeing positive times and methods of exit» Trinca published on his Facebook profile.

Medical Doctor Franco Trinca is a Nutritionist Biologist, Specialized in Food Science at the University of Perugia; he also obtained the University Diploma in Herbal Medicine at the University of Urbino and is an expert in Phytotherapy. «SARS-Cov-2, the agent of Covid-19 disease did not come as a “bolt from the blue”, but the imminent danger of a widespread and potentially dangerous (if not treated promptly and appropriately) coronavirus pandemic had been widely predicted and denounced by the WHO and the international scientific community» wrote Trinca and Tiberti with the legal advice of the lawyers Fusillo and Scifo.

On this topic it should be remembered that one of the prophetesses of the pandemic was the lawyer Avril Haines, former deputy director of the Central Intelligence Agency when the US Obama-Biden administration financed very dangerous experiments on the SARS and MERS coronavirus strains, infected with HIV/AIDS and enhanced in the viral load for “dual use” purposes (vaccine – bio-weapon) with the Gain-of-Function technique, similar to the principle of uranium enrichment in nuclear weapons. Haines herself, an expert in biological weapons and appointed director of all American intelligence by the new president Joseph Biden, recently admitted the hypothesis that the virus is of artificial origin in a report before the Senate Committee.

This, also supported by the journal of the Massachusset Institute of Technology, thus corroborated the studies published by some Indian researchers, by the French virologist Luc Montagnier and by his compatriot bio-engineer Pierre Bricage, published last year by Gospa News in the WuhanGates cycle on the pandemic “planned for decades”, as claimed by the lawyer Robert F-Kennedy junior, as part of a plot of the New World Order of which we have revealed and demonstrated many tricks.

But let’s get to point 2 of the complaint by Trinca and the European Consumers Association of Tiberti: «The Italian health and government authorities have not taken the necessary actions to prepare the country and the national health system (especially local medicine) for the impact with the pandemic wave. For example (but not only) they did not adapt the 2006 Pandemic Plan; the Bergamo Public Prosecutor’s Office has opened a judicial investigation on this and, among other things, has accused Ranieri Guerra, a former executive of the Ministry of Health and now deputy director of the WHO world. When the pandemic arrived in Italy, the 2006 PP was not even applied in one of the KEY POINTS: the choice and timely availability of antiviral drugs and “supportive” treatments».

We would have to write a very long parenthesis on this topic since we have dedicated three reportages to Dr. Guerra, scientific ambassador to Washington for the government of Matteo Renzi who laid the foundations of the 12 compulsory vaccines in school age that became law with the government of Paolo Gentiloni in a political plan hatched by Barack Obama with Bill Gates in which George Soros, the other megadonor of the US Dems for decades partner of the PD in Italy, also got a hand.

Point 4 of the complaint to the Rome Prosecutor’s Office is the summary of other Gospa News inquiries on the banning of effective therapies such as cortisone, hydroxychlorichine and vitamin D: «AIFA and the Ministry of Health have bound general practitioners to INEFFECTIVE PROTOCOLS for home management of Covid-19, strongly directing symptomatic patients to hospitalization; this has caused and still causes overcrowding in the infectious disease and intensive care units, as well as tens of thousands of deaths that could have been avoided» reads the text published by Trinca on FB.

«On the basis of an emergency situation determined by very serious errors of health governance, heavy restrictions on movements and activities have been imposed on the population and on the productive and services fabric» is the consideration of the complainants perfectly in line with the complaint to the Court of the Hague by the magistrate Giorgianni.

«In addition, the health institutions (AIFA, Ministry of Health and ISS) have inhibited hospital doctors from carrying out autopsies on deceased patients, thus greatly delaying the acquisition of thrombotic complications and disseminated intravascular coagulation (DIC) and related treatments. In addition, they CONTRASTED and still contrast both the “preventive treatments, strengthening the immune system and adjuvant support in case of disease (minerals, antiviral nutraceutical vitamins such as Quercetin, etc.), and EFFECTIVE PHARMACOLOGICAL PROTOCOLS used positively by hundreds of doctors courageous and ethical who have HEALED thousands of patients».

This was reiterated in an interview by Professor Giancarlo Isaia, head of Geriatrics at the Molinette hospital in Turin, who demonstrated the effectiveness of vitamin D, again rejected by the circular of the Ministry of Health, despite the appeal signed by 156 doctors, including well-known primary and academic professors, but completely ignored for months by Minister Roberto Speranza, just as he did for the appeal on the use of dexamethasone proposed by neurologist Roberta Ricciardi with 33 other doctors.

«As an alternative to treatments that have proven effective in the field, health and government authorities want to impose the mass use of anti-covid-19 vaccines that are neither effective nor safe, due to a deficiency admitted and reported by the manufacturers. For all this and much more, the complainants urge the Judiciary to investigate whether for the physical subjects at the head of health institutions there are, among other things, the profiles of the crimes of MASSACRE and TERRORISM (art. 270 sexies of the Criminal Code)» Trinca and Tiberti conclude with their lawyers, evoking the same arguments already included in the warning sent to the Ministry of Health by the magistrate Giorgianni, against the mandatory nature of vaccines for health workers.