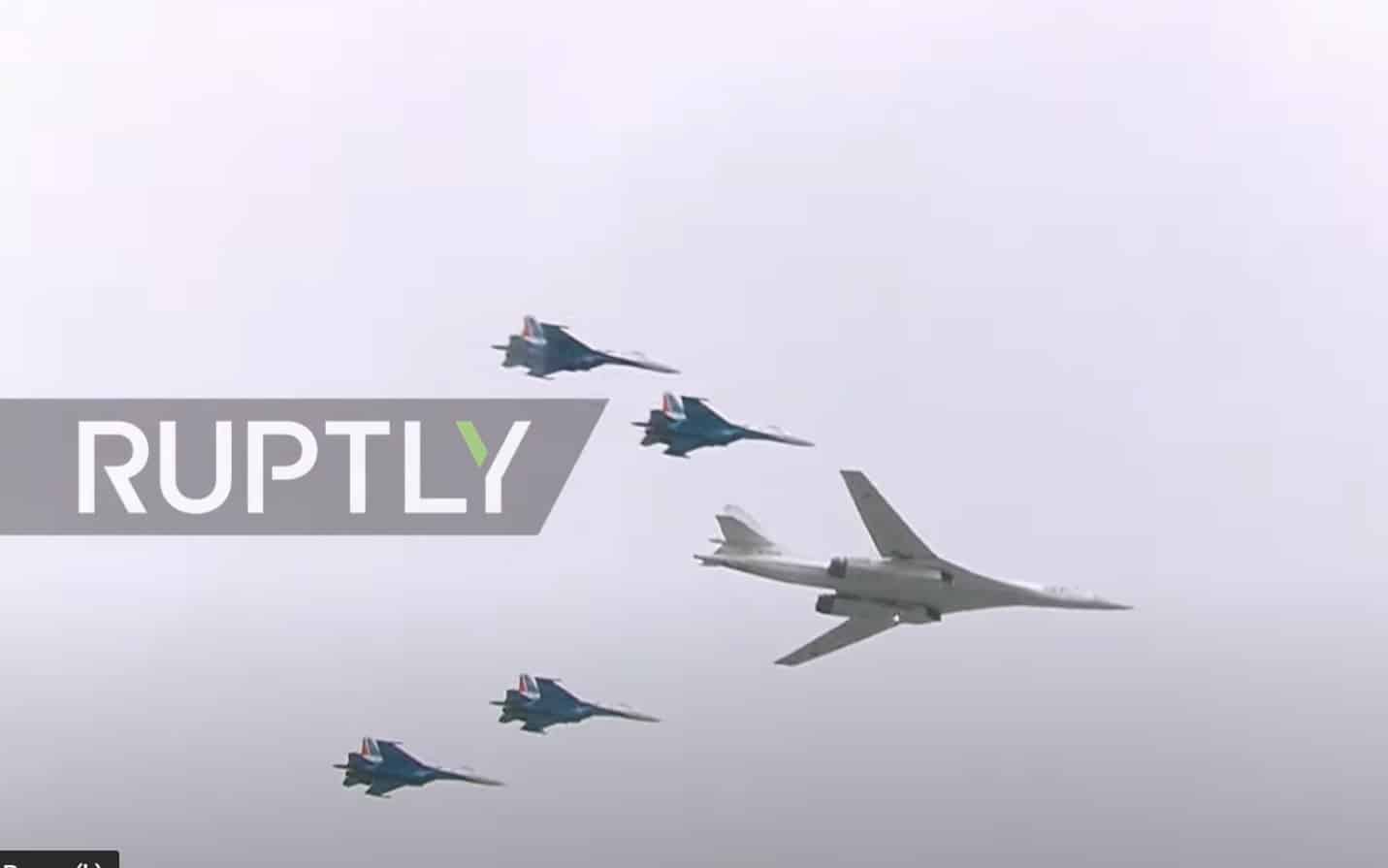 RT/Moscow: Russian jet fighters and helicopters of all shapes and sizes flew over Moscow’s Red Square on Sunday, as Russia celebrated victory over Nazism in WWII.

There were worries that the aircraft would be grounded due to the cloudy weather, but the planes were cleared for flight at the last moment.

The aerial parade was led by Mi-26 heavy transport helicopters, which were closely followed by Mi-35M and Mi-24 gunships, as well as Ka-52 attack helicopters.

A Tu-95 bomber and an Il-78 tanker imitated aerial refueling. Next came a Tu-160 supersonic nuclear-capable strategic bomber that was flanked by four jet fighters.

Su-34 bombers, Su-30SM jets, and supermaneuverable Su-35S fighters flew by the Kremlin and Red Square in a tight formation.

In Russia and across the former USSR, Sunday marks the 76th anniversary of the Soviet victory over Nazi Germany and its allies in the Great Patriotic War of 1941-1945. Parades dedicated to the hallowed day were held across Russia, with Moscow boasting the largest, with thousands of troops, nearly 200 vehicles, and dozens of aircraft taking part.

Victory Day was marked in Moscow as normal this year, with health authorities giving the event the green light amid weakened coronavirus restrictions and vaccination campaigns. A year ago, the parade dedicated to the 75th anniversary of victory was postponed (apart from its aerial portion) until June and the anniversary of the legendary Victory Parade of 24 June 1945. The 1945 parade was the largest-ever in the Red Square’s history and involved over 40,000 troops and 1,850 military vehicles.

Sunday’s event proceeded like clockwork, with the clock striking 10:00 am, Defence Minister Sergei Shoigu and parade commander Gen. Oleg Salyukov inspecting the troops, after which Shoigu headed for the tribune to report that the forces were ready for the parade.

© SPUTNIK / АЛЕКСЕЙ НИКОЛЬСКИЙ
Troops carry the Banner of Victory and the Russian state flag ahead of the parade dedicated to the 76th Anniversary of Victory in the Great Patriotic War. 9 May 2021.

In his speech ahead of the parade, President Vladimir Putin thanked veterans for their service and said that “we bow before your courage and fortitude.” He vowed that “we will always remember that it was the Soviet people who performed this great feat” and achieved victory. “During the most difficult time of the war, in the decisive battles that determined the outcome of the struggle against fascism, our people stood alone, alone on the arduous, heroic and selfless path to victory.”

After a minute of silence to the fallen, Putin warned that today, many elements of the twisted ideology of Nazism are once again raising their ugly head. “History demands that conclusions and lessons be learned. But unfortunately, much from the ideology of the Nazis, who were obsessed with the delusional theory of their exceptionalism, is once again attempted to be put into service. And not just by various radicals and international terrorist groups,” he emphasized.

Today, Putin said, “we see gatherings of war criminals that have not been finished off, their followers, attempts to rewrite history, to whitewash traitors and bandits, whose hands are covered with the blood of hundreds of thousands of innocent people.”

The president wrapped up his speech with the words: “Glory to the victorious people. Happy Victory Day to you! Ura!” after which the parade began.

The on-foot portion of the parade featured a combination of historical and modern uniforms, formations and units, and was kicked off as always by students of the legendary Moscow Suvorov Military Music College named after Valery Khalilov. These young drummers and flute players dressed in black accented by red and gold have an important job – setting the tone and rhythm of the entire parade. They have kicked off nearly every military parade on Red Square since the late 1930s.

They were followed by dozens of formations representing all three branches of the Russian Armed Forces – the Ground Forces, the Navy and the Aerospace Forces, including signals, airborne, railway, engineering, NBC defence and strategic rocket troops, as well as National Guard, the Ministry for Emergency Situations, the FSB and the All-Russian Cossack Society and the Young Army Cadets units.

Standing out in the crowd this year were Russia’s female service members – cadets from five of Russia’s most prestigious military academies. Among them were future specialists for military work on the home front, military psychologists and translators, lawyers and finance specialists, and officers of the Aerospace Forces and Signals Troops.

The women seen at Sunday’s parade are just a fraction of the 40,000 female soldiers serving in the Russian military today.

The Cossacks also stood out in their traditional black and red outfits complete with capes and ushanka hats, instantly reminding history buffs of images of the Cossacks who marched across Red Square nearly 76 years ago in the very first parade of victory. Although the Cossacks are traditionally associated with the Orthodox Church, this year’s parade participants included three Buddhist believers.

The military equipment portion of the parade was kicked off by ten vintage WWII-era T-34-85 tanks. They were followed by Russia’s modern armour, including T-72B3M, T-80BVM, T-90M and T-14 Armata tanks.

A variety of advanced equipment came after, including rocket and artillery units, airdrop vehicles and air defence systems, with TOS-1A multiple rocket launchers making a special impression. First experimented with during the Soviet-Afghan War, the system is designed specifically to crack heavily fortified enemy positions, but can also be used against enemy formations in open country. Upgraded versions of the system have an operational range of up to 10 km.

© SPUTNIK / ЕВГЕНИЙ БИЯТОВ
TOS-1As drive past the tribune at the parade dedicated to the 76th Anniversary of Victory in the Great Patriotic War.

The rumble of the heavy RS-24 Yars mobile missile launchers also couldn’t fail to be noticed. With its 12,000 range, multiple MIRVs and ability to accelerate to up above Mach 20, Yars intercontinental ballistic missiles are capable of defeating any enemy missile defence system, and serve as the backbone of Russia’s mobile ground-based nuclear forces, guaranteeing a Russian response in the event of major enemy aggression against the homeland.

The aerial portion of the parade went off without a hitch despite overcast skies, with a combination of transport, attack and gunship helicopters, and tactical, transport and strategic aviation passing over the heart of the Russian capital, among them four new Sukhoi Su-57 fifth generation fighters and Mikoyan MiG-31K interceptors, armed with Kinzhal hypersonic missiles. Russia dusted off Soviet-era plans for the development of hypersonic weaponry in the mid-2000s, after the United States withdrew from the 2002 Anti-Ballistic Missile Treaty and began developing missile shield components.

Moscow’s Victory Day Parade was the largest and most-watched, but certainly not the only one. Parades were held across over a dozen cities and across Russia’s eleven time zones, from Petropavlovsk-Kamchatsky in the Far East to the exclave of Kaliningrad in the west. You can watch the full version of the Moscow parade, complete with English translation, on Sputnik’s official channel here.

© SPUTNIK / ВЛАДИМИР АСТАПКОВИЧ
Veteran of the Second World War, one of the guests invited to watch the parade dedicated to the 76th Anniversary of Victory in the Great Patriotic War.