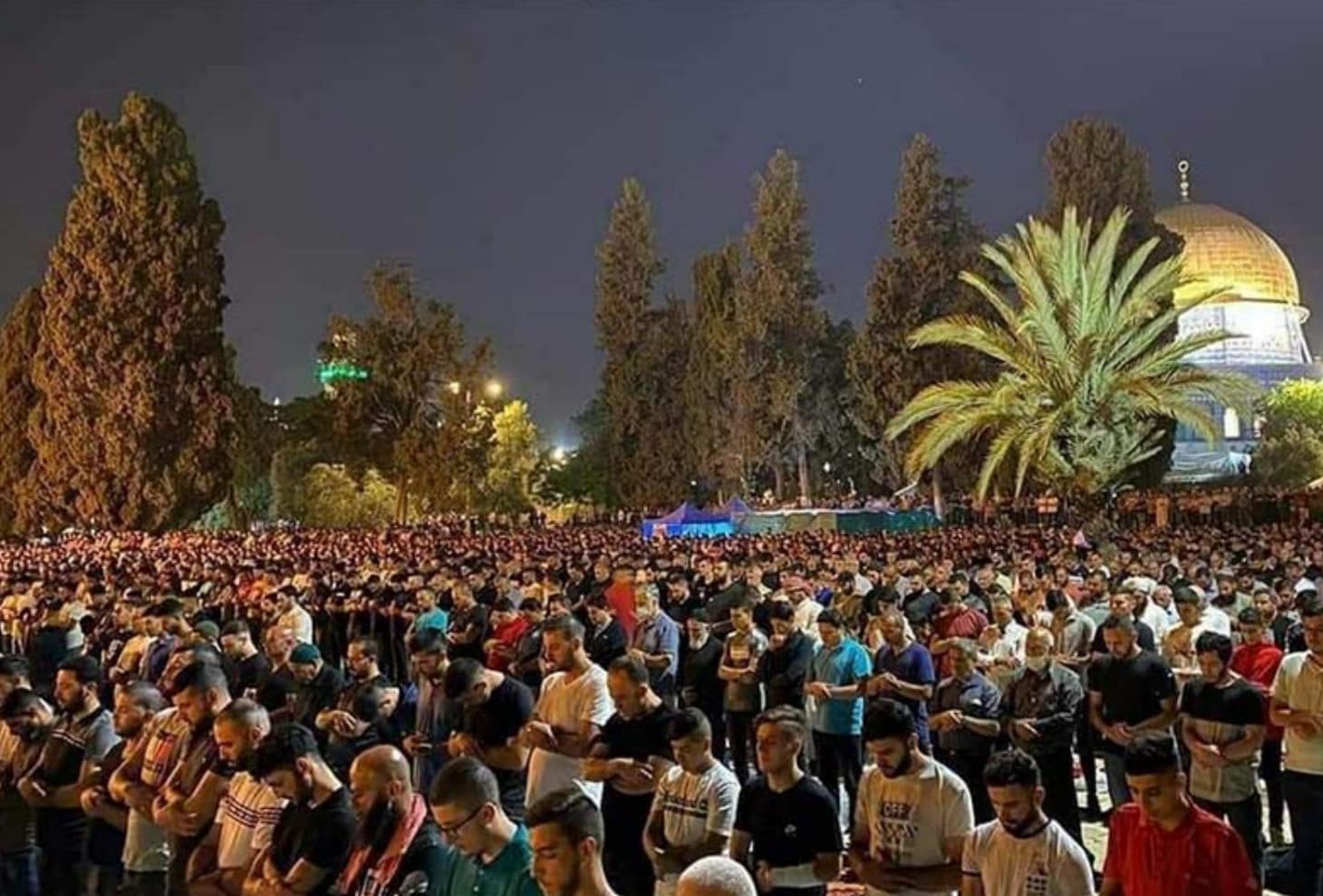 Since dawn of today, 10 May 2021, Israel and its occupying forces have escalated their attacks against Palestinians in Jerusalem, and specifically against worshipers inside Al-Aqsa Mosque.

Storming Al-Aqsa Mosque compound, where some 20,000 Palestinians were present for Al-Fajr prayer, the Israeli Occupying Forces (IOF) fired rubber bullets, tear gas canisters, and sound bombs, targeting Palestinians, while preventing the entry of the Red Crescent medical teams into the compound, where dozens are wounded, some in serious condition.

As of 10 am, when around 7,000 Palestinians were participating in a sit-in inside the Mosque, the Red Crescent reported that at least 180 Palestinians were injured, 80 of whom needed to be hospitalised. Paramedics and journalists are among the injured.

Considering the escalation in aggressions against Palestinians in the past few weeks, which continue to rapidly increase, and Israeli settlers’ intention to storm Al-Aqsa Mosque compound, we warn that Israel’s use of force will lead to a further escalation in attacks against Palestinians, and urge the international community to take immediate and concrete measures to halt Israel’s attacks.

Israel’s oppression and fragmentation of the Palestinian people, systematic use of excessive force, collective punishment and arbitrary arrests policies, along with settler violence, which is carried out with institutionalised impunity, are a few characteristics of

Israel’s settler-colonial and apartheid regime. In the past four days, the IOF killed three Palestinians, including a 16-year-old boy, Said Odeh, who was shot, at least twice, in his back.

With intensified oppression and aggression against Palestinian Jerusalemites since the start of Ramadan, the imminent threat of having some 87 Palestinian Jerusalemites forcibly transferred by Israeli settler organisation, with the assistance of Israel’s discriminatory and unlawful legal system, and eruption of built-up Palestinian frustration from decades of colonial suppression, the occupied Palestinian territory, generally, and Jerusalem, specifically, has seen a surge in these policies and violations.

Palestinian Jerusalemites have been systematically targeted and attacked since 13 April 2021, the first day of Ramadan. The IOF then stormed the outer minarets of the Al-Aqsa Mosque and cut the wires for the speakers, preventing the call to prayer before going on to place metal barriers close to Damascus Gate.

The IOF followed these provocations by attacking Palestinians with hands, batons, and sound bombs in an attempt to prevent the latter from sitting on the steps. On 22 April 2021, at night, Israeli settlers, including those affiliated with the Israeli far-right group Lehava, took to the streets, chanting ‘death to Arabs.’

Notably, the IOF always provide settlers protection, thereby encouraging and contributing to these attacks. According to the Palestinian Red Crescent, 105 Palestinians were wounded, 22 of whom were hospitalised in moderate condition. It was also reported that over 50 Palestinians were arrested.

These events continued, along with arbitrary arrests, on a daily basis until 25 April 2021, when Palestinians removed the metal barriers. Israel, however, continued its crack down on Palestinians, including by arbitrarily arresting Palestinians who celebrated the removal of the barriers.

Within the same context of Israeli oppression and domination, inherent in its settlercolonial and apartheid regime, the IOF and Israeli settlers systematically attack and harass Palestinian residents of Sheikh Jarrah, and other Palestinians joining in solidarity.

The Israeli Supreme Court, which unlawfully applies Israeli discriminatory domestic law to an occupied territory, was supposed to hold a hearing on 10 May 2021 on the forced eviction of eight Palestinian families, who were already forcibly expelled during the Nakba of 1948, and continue to experience an ongoing Nakba.

Waiting for the Court’s decision, residents of Sheikh Jarrah have called for solidarity activities in support of their struggle and in resistance to Israel’s oppression. Since 2 May 2021, along with other Palestinians who joined in solidarity, the residents have been meeting to break their fast publicly in front of their houses in Sheikh Jarrah.

As Palestinians were opposing oppression, they were faced with more oppression. For over a week, the IOF and Israeli settlers, some of the latter being armed, have been suppressing and attacking Palestinians in Sheikh Jarrah, including by raiding and damaging houses, firing tear gas canisters, sound bombs and skunk water, and arbitrarily arresting them.

On 6 May 2021, Knesset member Itamar Ben-Gvir moved his office to the Sheikh Jarrah neighbourhood, placing it in front of Al-Ghawi family house, which was taken over by settlers in 2009. At Iftar time of that day, Israeli settlers, protected by the IOF, pepper-sprayed Palestinians, who defended themselves by throwing chairs at the settlers. The IOF used force to supress Palestinians and defend the Israeli settlers.

On 7 May 2021, last Friday of Ramadan, the IOF continued attacking Palestinian Jerusalemites, including by vigorously firing sound and tear gas bombs and shooting rubber-coated bullets at the worshipers inside the courtyards of the Al-Aqsa Mosque. The repression of Palestinians in Al-Aqsa Mosque continued until about 3:00 am, when they emptied the Mosque and closed its doors.

Also, on the same day, Israel closed Route 433 and Abu Ghosh Road, and prevented Palestinian busses coming from inside the Green Line to reach Al-Aqsa Mosque, which exemplifies how Israel continues to geographically fragment the Palestinian people.

Seriously alarmed by this rapid escalation of violence, we welcome the joint statement issued by France, Germany, Italy, Spain and the United Kingdom, urging Israel to ‘cease its policy of settlement expansion,’ addressing the situation in Sheikh Jarrah, and reminding Israel of its legal obligations.

We are, however, concerned about the language used in the statements of the Middle East Quartet Envoys, and the European Union, expressing ‘concerns’ with regards to the forcible evictions and the rise of ‘tensions and violence’ in East Jerusalem, calling on ‘all sides to uphold and respect the status quo at the holy sites,’ affirming that ‘all leaders have a responsibility to act against extremists and to speak out against all acts of violence and incitement.’

On 9 May 2021, Israel’s Supreme Court postponed the hearing on Sheikh Jarrah, which was initially scheduled on the same day as the so-called ‘Jerusalem Day’, an Israeli holiday ‘celebrating’ the unlawful occupation and annexation of East Jerusalem in 1967.

It is imperative to note that the Israeli judicial system is both discriminatory and biased against Palestinians, as it only serves the interests of Israel’s settler-colonial enterprise. As such, it is imperative that the international community immediately intervenes to prevent Israel from conducting these evictions.

By failing to take immediate and direct actions to halt Israel’s oppression of Palestinians, not only will the the very structure of international legal order be assaulted, but Palestinians, enduring, and frustrated by, decades of Israeli settler-colonialism and apartheid regime, will continue to face systematic and intensified attacks by the Occupying Power. Words of condemnation are not enough.

Israel’s long-established unlawful policies will not come to an end as long as the international community does not have the political will to take concrete actions, including by sanctioning Israel, in order to hold Israel accountable for its breaches of international human rights and humanitarian law.

The Civic Coalition for Palestinian Rights in Jerusalem (CCPRJ)