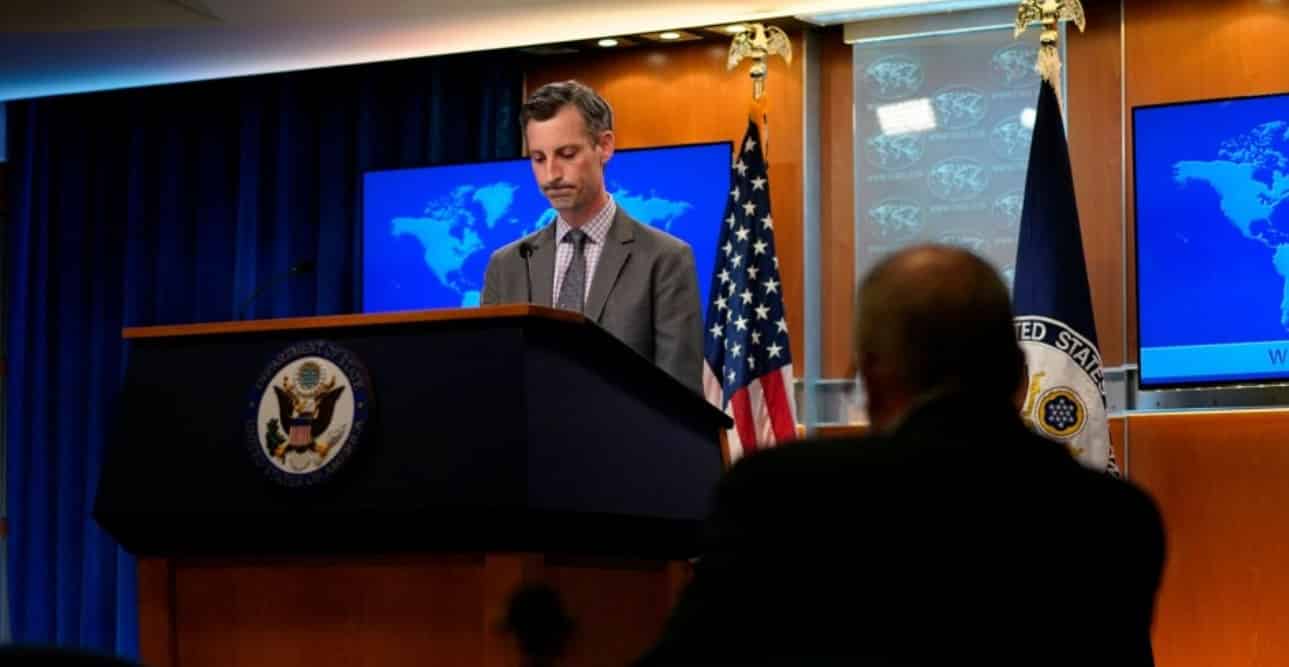 U.S. State Department spokesman Ned Price listens to questions from reporters during a press briefing at the State Department in Washington, D.C. on March 31, 2021. (Photo: Carolyn Kaster/Pool/AFP via Getty Images)

Pressed repeatedly by reporters during a briefing on Monday, U.S. State Department spokesperson Ned Price refused to condemn Israel’s killing of children with airstrikes on Gaza, offering evasive and mealy-mouthed responses that members of Congress slammed as unacceptable.

Asked straightforwardly whether he condemns the killing of Palestinian children, Price replied that the Biden administration does not “have independent confirmation of facts on the ground yet” and is “hesitant to get into reports that are just emerging.”

“Obviously, the deaths of civilians, be they Israeli or Palestinians, are something we would take very seriously,” added Price.

Rep. Ilhan Omar (D-Minn.), whip for the Congressional Progressive Caucus, tweeted late Monday that “this unsurprising response is devoid of empathy and concern for human suffering.”

“He can’t even condemn the killing of children,” Omar added.

According to the Palestinian Health Ministry, Israel’s airstrikes in Gaza on Monday killed 24 people, including nine children. Israel claimed it was targeting “Hamas operatives” and said the airstrikes were retaliation for rockets fired into Israel from Gaza, which reportedly caused several injuries.

Hamas claimed responsibility for a rocket attack in Jerusalem, where Israeli security forces injured more than 300 Palestinians earlier Monday in an assault on the Al-Aqsa mosque compound, Islam’s third-holiest site.

At the start of Monday’s briefing, Price stressed “Israel’s legitimate right to defend itself and to defend its people and its territory.” But asked whether Palestinians have the same right, Price quickly reverted to defending the broad principle of self-defense while refusing to answer the question.

“It is long past time we finally take action to protect Palestinian human rights and save lives.”
—Reps. Ilhan Omar, Rashida Tlaib, and André Carson

“We believe in the concept of self-defense,” said Price. “We believe it applies to any state.”

Given that Palestinians are a stateless people living under Israeli military occupation, they would not have a right to self-defense under Price’s standard, as Associated Press reporter Matt Lee pointed out.

“Are you saying the Palestinians don’t have a right to self-defense?” Lee asked, to which Price replied, “I was making a broader point not attached to Israel or the Palestinians in that case… I’m not in a position to debate the legalities from up here.”

“U.S. aid should not be funding this violence,” Pocan added.

Omar, Rep. Rashida Tlaib (D-Mich.), and Rep. André Carson (D-Ind.) sent a similar message in a joint statement issued Monday, declaring, “We are horrified by the violent assault by Israeli forces on the Al-Aqsa mosque, and the continued violent attacks on the Palestinian people during the holy month of Ramadan.

“We continue to provide the Israeli government with over $3 billion in military aid every year—with no conditions or accountability for wanton human rights abuses and continuing illegal seizures of Palestinian land,” the lawmakers continued. “For decades, we have paid lip service to a Palestinian state, while land seizures, settlement expansion, and forced displacement continue, making a future home for Palestinians more and more out of reach.”

“It is long past time we finally take action to protect Palestinian human rights and save lives,” the trio said.