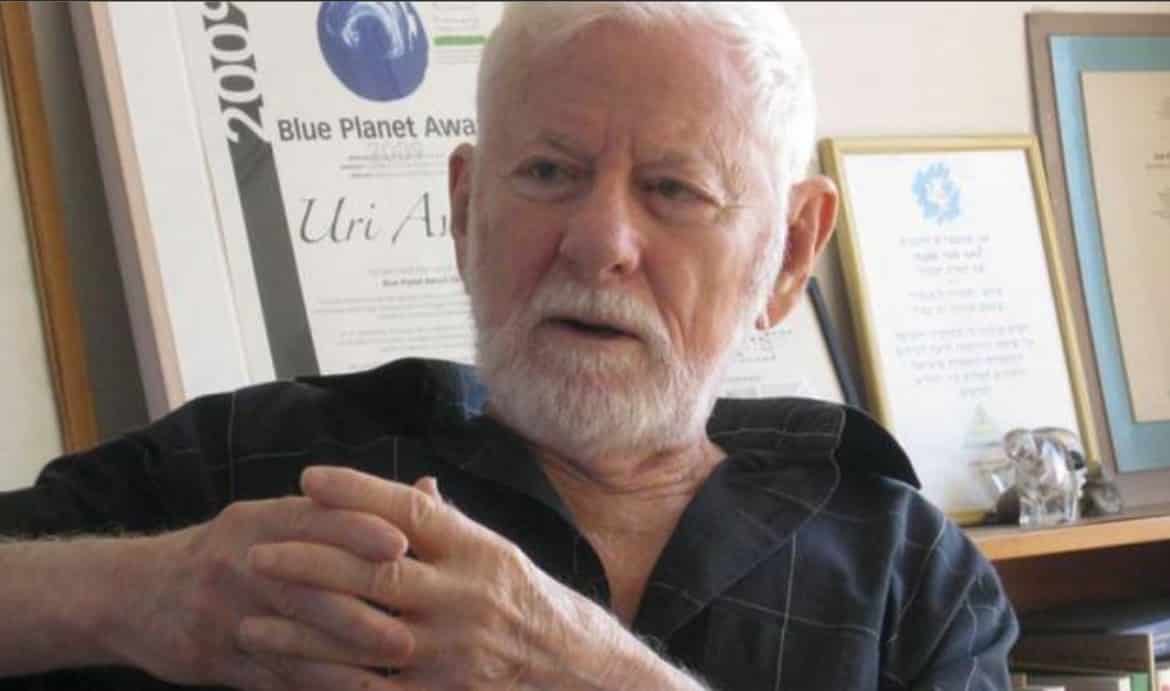 A disaster was averted yesterday (June 5) at Tel-Aviv’s Museum Square, when rightists threw a smoke grenade into the middle of the protest rally, obviously hoping for a panic to break out and cause the protesters to trample on each other.

But the demonstrators remained calm, nobody started to run and just a small space in the middle of the crowd remained empty. The speaker did not stop talking even when the cloud of smoke reached the stage. The audience included many children.

At the critical moment, the police arrived and made it possible for the car to leave. Gush spokesman Adam Keller said: “These cowards did not dare to attack us when we were many, but they were heroes when they caught Avnery alone.”

The incident took place when the more than 10 thousand demonstrators were dispersing, after marching through the streets of Tel Aviv in protest against the attack on the Gaza-bound aid flotilla.

Not only was this one of the largest peace demonstrations for a long time, but also the first time that all parts of the Israeli peace camp – from Gush Shalom and Hadash to Peace Now and Meretz – did unite for common action

The main slogan was “The Government Is Drowning All of Us” and “We must Row towards Peace!” – alluding to the attack on the flotilla. The protesters called in unison “Jews and Arabs Refuse to be Enemies!”

The demonstrators assembled at Rabin Square and marched to Museum Square, where the protest rally was held. Originally, this was planned as a demonstration against the occupation on its 43th anniversary, and for peace based on “Two States for Two Peoples” and “Jerusalem – Capital of the Two States”, but recent events turned it mainly into a protest against the attack on the flotilla.

One of the new sights was the great number of national flags, which were flown alongside the red flags of Hadash, the green flags of Meretz and the two-flag emblems of Gush Shalom. Many peace activists have decided that the national flag should no longer be left to the rightists.

“The violence of the rightists is a direct result of the brainwashing, which has been going on throughout the last week,” Avnery commented. “A huge propaganda machine has incited the public in order to cover up the terrible mistakes made by our political and military leadership, mistakes which are becoming worse from day to day.”

Uri Avnery created a world sensation when he crossed the lines during the battle of Beirut and met Yassir Arafat on July 3, 1982 — the first time the Palestinian leader ever met with an Israeli. Several Israeli cabinet ministers called for Avnery’s indictment for high treason, while peace activists hailed the meeting as a historical breakthrough. It was the culmination of an effort started by Avnery many years earlier.

Avnery was born as Helmut Ostermann on September 10, 1923, in Beckum, Westphalia. His father, member of an old-established well-to-do German Jewish family, was a private banker in Beckum, and later on a financial expert in Hannover. As a veteran Zionist, he took his family to Palestine immediately upon Hitler’s rise to power (1933). In Palestine, he quickly lost the considerable capital he had brought with him, and had to do hard manual work, as did his wife.

Avnery (he changed his first and second name on reaching the age of 18, adopting a Hebrew name, as was usual at that time) attended elementary school first in Nahalal, the famous moshav (communal village), and later on in Tel-Aviv. Because of his family’s extreme poverty at that time, he left school after the seventh grade, at the age of 14, and earned his living at many jobs, until he turned to journalism as his profession in 1947.

In 1938, just before turning 15, he joined the Irgun underground (Irgun Tzwai Leumi – National Military Organization), in order to take part in the fight against the British colonial regime. He served for three years, but left the Irgun in protest against its anti-Arab and reactionary social attitudes and terrorist methods.

Later he explained his attitude in a booklet entitled “Terrorism, the infantile disease of the Hebrew revolution” (1945). His only brother, Werner, a commando soldier in the British army, was killed in the Ethiopia campaign.

After some years of sporadic political activity, Avnery founded in 1946 the Eretz Yisrael Hatz’ira (“Young Palestine”) movement, also known as the “Bama’avak (Struggle) group” by the name of its publication, which he edited. This group created an unprecedented uproar because of its contention that the Jewish community in Palestine constitutes a “new Hebrew nation” within the Jewish people, and that this nation is a part of Asia and the natural ally of the Arab nation.

In September 1947, on the eve of the Israeli-Palestinian war, Avnery published a booklet entitled “War or Peace in the Semitic Region”, which called for a radically new approach:

An alliance of the Hebrew and Arab national movements in order to liberate the common “Semitic Region” (a term coined by Avnery in order to avoid the colonialist term Middle East) from imperialism and colonialism, and create a Semitic community and common market, as a part of the emerging third world. Excerpts of the booklet were sent to the media throughout the Arab world and mentioned in some Arab newspapers, just before the start of the war.

At the outbreak of the war, Avnery joined the army (Giv�ati brigade) and later volunteered for “Samson’s Foxes”, a commando unit on the Egyptian front which soon became legendary. He was severely wounded during the last days of the fighting, and after several months of convalescence was discharged in the summer of 1949 with the rank of squad leader.

Throughout the war, Avnery reported on his experiences as a combat soldier who took part in nearly all the major battles on the Jerusalem and southern fronts. These reports, which appeared in the Ha’aretz evening paper, were published after the war as a book, “Bisdoth Pleshet 1948” (“In the Fields of the Philistines, 1948”), which became overnight the biggest bestseller of that time, and is still generally recognized as the outstanding book of that war, in the tradition of Erich Maria Remarque’s “All Quiet on the Western Front”.

Ten editions were published in quick succession and several more later on. (A new edition was published in April 1998, on the eve of Israel’s 50th anniversary.) However, when he wrote a follow-up, “The Other Side of the Coin”, which described the dark side of the war, including atrocities and the expulsion of the Palestinians, it was boycotted.

In 1949, the editor of Ha’aretz invited Avnery to join his staff as a writer of editorials. After one year Avnery quit, protesting that he was not allowed to express his opinions, especially concerning mass expropriation of Arab lands by the Ben-Gurion government. Thereupon, in April 1950, he bought a moribund family magazine and turned it into a unique Israeli institution.